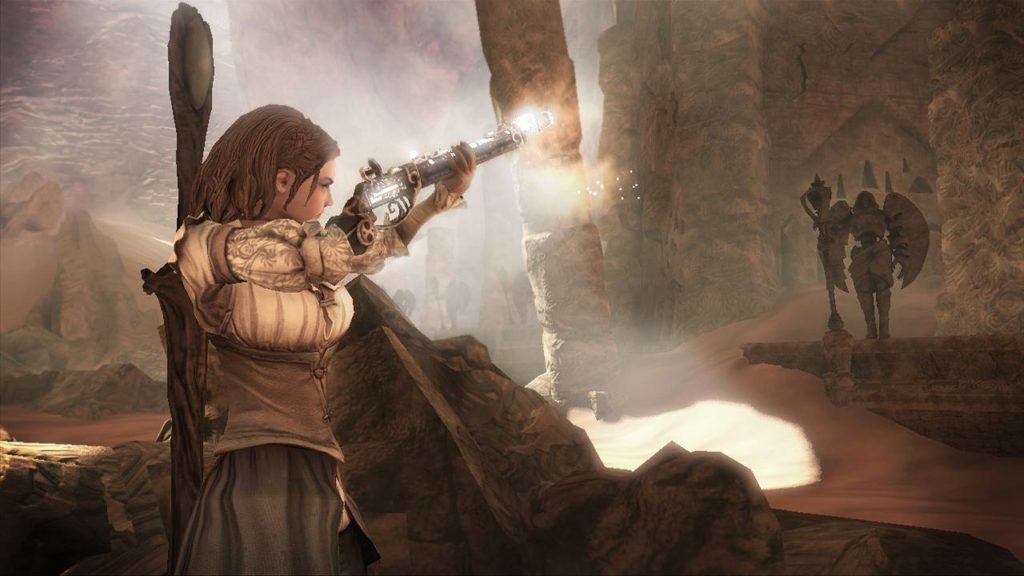 My story begins like many others. Daughter of the former Hero Queen, my brother rules Albion with an iron fist. People are suffering, forced to work in awful conditions, starving, homeless. I lead a pretty easy life of luxury. Despite being sheltered by my brother, I have people who have been training me for the day that I might become ruler of Albion and bring the nation prosperity once more.

Things were going pretty smoothly in the beginning. I gathered the support I required from allies who would die to see a revolution in Albion. Men sacrificed themselves to our cause. Using my latent talents, I was able to change living conditions for poorer folks, rescue towns from dangerous creatures and mercenaries, and ultimately become the ruler Albion needed to save it from the approaching storm. Millions amassed in my treasuries which I shared with the people.

Life as the Hero Queen of Albion was good.

And then things took a turn for the worse.

It began with my dear servant Jasper losing his voice in my Sanctuary. From what I had heard from other Heroes, this was a common problem. Spontaneous laryngitis was an affliction that had for centuries been in his bloodline, something he failed to disclose when he applied with my mother for the job.

Later on, I joined a fellow Hero Queen to aid in the collection of silver keys and gnomes scattered across her lands. As we all know, those pesky gnomes Brian gave life to are snarky little jerks who need to be put back in their gardens. My comrade had difficulties with her Sanctuary, though, which frequently left her trapped in the room or on the map and unable to return to her exploration. While we quested together, the same thing happened when I visited my Sanctuary. I was trapped looking at a map and nothing save leaving the realm completely would help either of us.

Shortly after this incident, I became aware of problem with my questing scroll. For some reason one of the things on my To Do list was written down twice. Surely this was an error that would clear up once I successfully rid the cave of the offending Hobbes in question. Sadly, this did not happen. The Guild Seals were correctly added to my total, but only one of the Hobbes entries was stricken from the list. The second remains to this day.

The breaking point came when I attempted to join my Hero Queen partner once more. I had made sure to record my history in the Albion annals so as not to forget any progress. It was not to be. My attempt to cross into her world ended up with me in suspended animation, forcing me to pull the plug on that experiment. After a few minutes, I returned to Albion only to discover that the worst possible thing had happened to my character.

Now that I was a naked male with nothing more than a touch of magic to wield, there was nothing more I could do. My family commune must have crumbled to nothing. I’m sure the five nannies in my employ left since they hadn’t been paid in a while, leaving my husband to care for not only our two children, but the ten adoptees I rescued from the Bowerstone Orphanage. Alan most likely sent them all back because a single father cannot take care of a dozen children all on his own and make sure the castle staff are well-fed.

I cannot help but wonder if the QA department at Lionhead Studios was overwhelmed during Fable 3’s production and if certain issues were overlooked or ignored so that the game could be on retail shelves in time for Holiday sales. The disc shipped to stores with a known duplication glitch, an issue patched with a mandatory Xbox LIVE update on November 6th, but so far nothing has been done to help those with the first two problems I mentioned.

The question remains: Why does it seem like over ninety percent of AAA titles coming out of the larger studios come to market riddled with issues? Is the software they are creating too advanced for the hardware currently running it or is it simply a matter of pumping out entertainment during peak sales windows? Are studios trying to lower production costs by not having enough testers on hand, or disregarding certain bugs so that the programmers don’t have to log more hours?

More and more it feels like gamers are being subjected to quantity over quality software. We always see slews of titles release during the Winter Holiday schedule, with obvious reason. With exception to the perennial sports titles, we witness publishers such as Activision, Ubisoft, Capcom, SEGA, EA and others pump dozens of games each year and several of them suffer from horrible frame rates, poor controls and bugs that make releases almost unbearable to play. Thankfully, we have great smaller studios producing experiences such as flOw and flOwer (thatgamecompany), Limbo (Playdead), and P.B. Winterbottom (The Odd Gentlemen) as alternatives, freeing us from being slaves to the Bobby Koticks of the gaming world.

After this fiasco, I admit I will be thinking twice (if not thrice) about purchasing titles from Lionhead. This misadventure was a slap in the face and not something I am soon to forget. Shame on you, Lionhead. Shame. On. You!