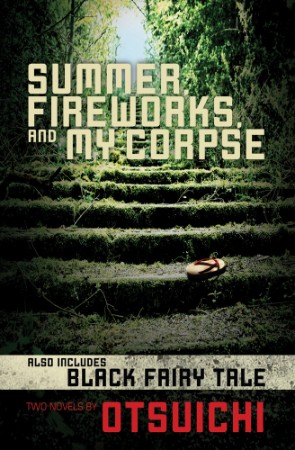 Zoo introduced me to the brilliance that is Otsuichi, and Summer, Fireworks and My Corpse has me on the brink of becoming an Otsuichi-addict.

This second Otsuichi collection from the Haikasoru line-up published by Viz Media features his debut and award winning story Summer, Fireworks and My Corpse, the tale of a young girl murdered during summer vacation in a fit of jealousy. The young girl’s corpse narrates part of the story as her killer and her brother attempt to make it look as though she was a victim of a kidnapper.

Also in this volume is Black Fairy Tale, in which a high school student loses an eye and receives a new one thanks to a slightly underground operation. With losing that eye and gaining a new one, she seems to have forgotten who she was and begins seeing images in her new eye which she discovers are the memories of the young man it previously belonged to. She sets out to discover what happened to the young man, hoping that solving that mystery might help her remember who she is.

Nestled in-between these two dark tales is a third short story, Yuko. A young woman is brought to an author’s home to help take care of the cleaning and meals but begins to suspect that her master’s wife is nothing more than a doll, a figment of his imagination. Convinced she is helping him out, she decides to help him see that he is clinging onto a wife that no longer is in this world.

If you are a fan of the macabre, Otsuichi’s dark tales should be a part of your horror library.

Purchase Summer, Fireworks and My Corpse from Amazon or RightStuf