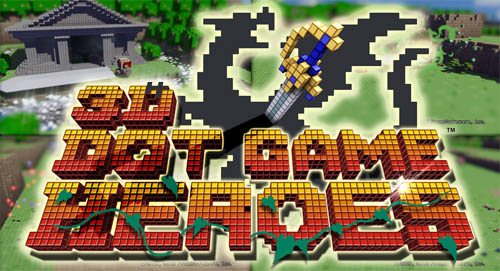 Once upon a time, in an 8-bit land not so very far away, the 8-bit people and their 8-bit pets, 8-bit grannies and 8-bit monsters came to the realization that 8-bit worlds didn’t have the market value they once did. The money stopped pouring in and life became pretty stagnant. It was around this time they sold their story to the fine creative minds at Atlus, at a reduced rate of course, and proclaimed that they would try this “3-D” craze all the kids have been talking about. (Plus, the King had seen James Cameron’s Avatar, and he knew that 3-D meant billion dollar sales, so he figured it couldn’t hurt.)

Dotnia is a land of many classic dungeons and colour coded keys. And swords. Like the giant one the greatest Hero of them all used to wield, until he stuck it into the ground. His sword was so great that it was nearly three times his size and could go through trees. No other sword can do that, just his uber special “yeah that’s not really a glitch” sword. And there are orbs. Because the people of Dotnia have seen countless fantasy movies at the 8-bit drive in and they know that magical orbs don’t get enough love these days. 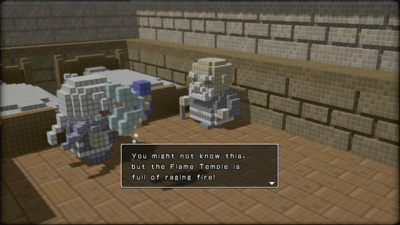 So the King gets up from his throne and declares they are going to upgrade from a 3D 8-bit existence to a 3D one. Now everyone is excited. There is purpose again to their mundane lives. Something is going to happen! And you are chosen to be the new Hero. Aren’t you just happy?

Here we are in 2010 and we are talking about an 8-bit game that isn’t pre-1990s. Why? Because 8-bit games have universal appeal, they are fun and charming, and 3D Dot Heroes is probably the best flattery for the classic 2D action adventure genre that ever will be.

Everybody wants to play a game that is fun. 3D Dot Heroes has all the in-humour and basic yet not-so-basic familiarity of games such as Legend of Zelda or Castlevania way back in the day. From what I have seen via the live web demo I attended last week and through various clips online, I have determined that this game is going to have copious amounts of fun wrapped inside a candy coating of awesome. It’s up to you just how much fun you want to have. Journeying in seven expansive dungeons and exploring the vast lands of Dotnia will probably take about 15 hours for a basic start to finish with a bit of dabbling adventure. Increased difficulties can be unlocked for those who want more of a hardcore “I grew up in the 80s!” experience. (And for those of you out there, just because we grew up with these games in the 80s doesn’t mean they didn’t kick our bumbs back then.) 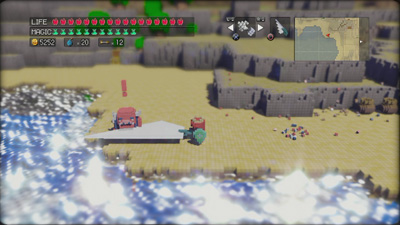 You can choose from one of three various alignments for your Hero – Royal Heir (balanced), Scholar (one of those nerdy book loving… I mean more magically inclined) or Hero (the slightly more I’m going to bash you with this club type). Instead of leveling up your character, all health and magic points are attached to your sword. So make sure you keep an eye out for red (healing) and green (magic) apples if you see you are about to die. And play smart! If you see a monster with a golden crown symbol over his head, that means he’s going to be a bit tougher than an ordinary one of his kind. Don’t think you can take him on? There is no shame in running from a battle if it means you will live to see another dungeon.

And how about mini-games? During the demo I was able to check out two of the three mini-games that are included at NO EXTRA CHARGE! Block Defense is a tower defense mini game in which you will try to stop the bad guys from getting to Point B from Point A, setting up towers (Ha!) along the way in hopes to kill them D-E-D dead. You can also use your custom made character to help if you want, or you can make your towers do all the work (boy, you really are a lazy Hero!). The second game Blockout challenges you to clear out all of the offending blocks in your way with just a few balls at your disposal. 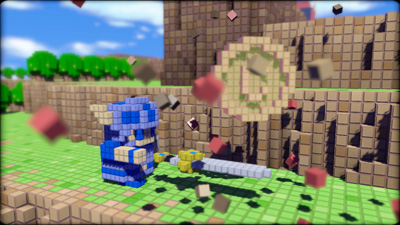 Now, the Japanese were able to get an awesome version of 3D Dot Heroes a few months ago, which is cool and all, but they had to wait for some things to be released as download content and we North Americans don’t. Neener neener neener! There are bonus Block Defense levels that we get on the disc, as well as some added pre-made characters to choose from, the option to install the game to the PS3 hard drive (yes, I said “option”-you don’t have to, but the game will load faster if you do) and the best part of it all – the Loading Screen Gallery.

I could spend hours just watching the Loading Screen Gallery. Our 8-bit inhabitants spent hours posing themselves against white backdrops to look like our favourite game box art just to get our attention. Part of the fun is trying to guess them all.

So what do the people of Dotnia ask in return for all the awesome fun they are bundling up for us?

Yup, for all that stuff I talked about and the epic in-game soundtrack that I am mentioning now, $39.99 will buy you a ginormous good time. There will be several hours of creating amazing characters that you can save to USB and share online with friends and strangers, all of which will be supported by Atlus. Can’t forget about all those cool trophies you’ll want to collect, which will mean more than one play through, not like you won’t play it over and over again to see if you can find all the swords and easter eggs without cheating. You also get a handy camera option, so you can take snapshots of your character taking down hordes of beasts and then use that as a desktop or PS3 background and brag to your friends or impress that boy/girl in your life with your “skillz”.

If you start saving 20 cents a day right now, you will be able to buy 3D Dot Game Heroes on May 11th and bring some financial stability back to Dotnia. What are you waiting for? Check your couches, your car and your linty pockets and pre-order it now!

(No editors were harmed during the writing of this article, however you are urged have a tall latte instead of a grande one and use that 20 cents you save everyday to help the Dotnians clothe and feed their pet dragons. And if you do that, they just might let Yukino out of the Flame Temple. It’s pretty hot in here. There’s fire in the Flame Temple, you know.)