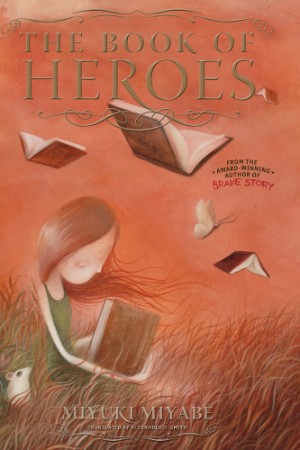 Yuriko Morisaki’s life does a major 180 one day when she is removed from class and sent home for the rest of the day. None of the adults will tell her what’s going on, and when she finally finds out, it is the worst kind of news possible. Her brother viciously attacked students in his class, killing one of them, and is nowhere to be found.

The only clue Yuriko can find in her brother’s room is a book she doesn’t recall him having before. It is no ordinary tome, as Yuriko soon discovers it is capable of speech. The book calls itself Aju and hints at problems in school leading her brother Hiroki down the path leading up to the incident. He reluctantly offers to help her find Hiroki and thus introduces Yuriko to the ways of The Circle.

But if she is to find her brother, she will have to face the King in Yellow, an evil so powerful that it needs to be sealed away. Somehow, Hiroki broke the seal, and stopping him is the only way for Yuriko to get her brother back.

Assuming the name U-ri, the young girl sets off on a quest to rescue Hiroki and learn the truth, no matter the cost. From the Hall of All Books and the Nameless Devout that act as its caretakers, to lands of fiction and back home again, Yuriko/U-ri faces all types of obstacles but never once waivers from her goal. Even when she discovers the reason behind her brother’s behaviour, all Yuriko wants to do is find him so she can forgive him and bring him home safely.

The Book of Heroes was a delightful if bittersweet tale that left me wanting more – in a good way. And because I enjoyed the story so much, I have since added Ms. Miyabe’s award winning novel Brave Story and video game novel adaptation of Ico to my library. Not to mention I plan on watching the TV adaptation of another of her novels, Stepfather Step, as it airs in Japan this Spring.

You can purchase The Book of Heroes from Amazon or RightStuf