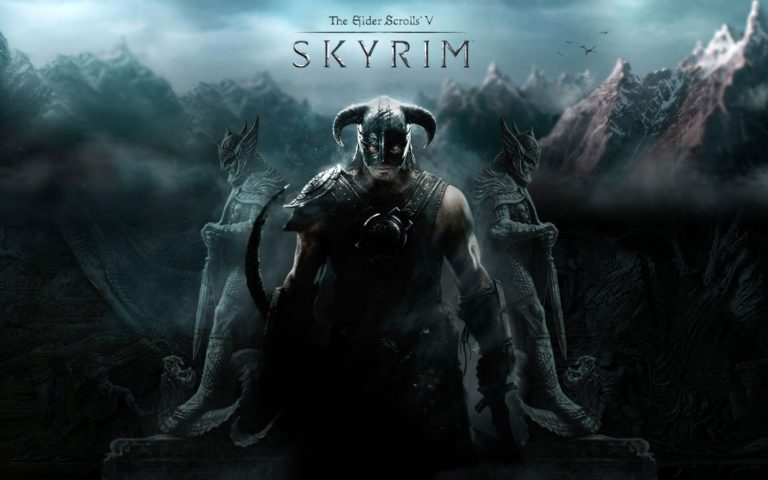 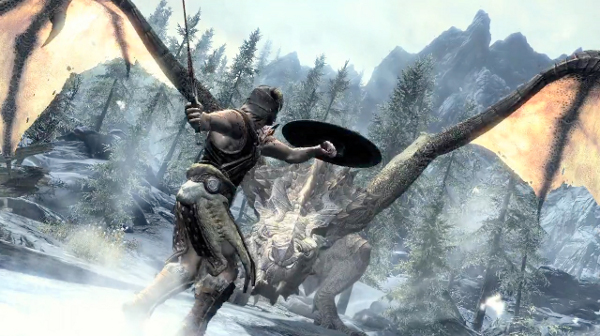 Warning: This review will most likely contain a few spoilers. Read at your own risk.

The fifth installment in Bethesda Game Studios’ epic role playing franchise, Skyrim offers players an exceptional adventure in the northern most province of Tamriel. Home to the Nords, Skyrim is in the midst of a civil war, a war in which you are unintentionally dragged into. Imperial guards believe you to be a member of the Stormcloak uprising, and bring you to Helgen for your execution. As your head rests on the chopping block, you witness a terrifying dragon land on one of the battlements, sending everyone into a panic and giving you the chance to escape.

Voices few can hear call out to you and name you “Dovahkiin”, thus leading you to a group of hermits known as the Greybeards. In their home on the highest mountain peak in Skyrim, this handful of men reveal to you your true nature and offer to assist you in learning the Way of the Voice, the tongue of the Dragons. It is no coincidence to them that you should arrive at their doorstep at the same time dragons reappear.

And so begins your journey to discover the truth behind the resurgence of the dragons. An epic task that will take you all over the beautiful northern province and beyond, literally.

Along the way you can stop and pick the flowers (literally, you can pick flowers, nirnroot, and other local herbs for alchemy purposes), spend time searching for bandit or necromancer infested caves to loot, or join one of the many groups looking for a lackey. Skyrim follows in the tradition of other Western RPGs, giving the player all sorts of freedom to play the game however he or she so chooses.

I chose to focus on discovery and guild quests in the beginning, making trips here and there to the main story as they intersected with whatever other goals I was pursuing at the time. I have this thing about trying to get all of the extra bits of games tidied up before sinking my teeth into the main focus of the story, although it can be contested that in Skyrim the extra bits are just as meaty and delicious as the main course. And because there are so many ways to play the game, outcomes may vary depending on what actions you’ve previously done. Killing the brother of a townsperson  who has a quest for you before taking the job can mean different dialogue options, and so forth.

By far my favourite change up from Oblivion to Skyrim was the elimination of structured classes and the introduction of the Perk system. Instead of forcing the player to select a class type (Warrior, Mage, Thief) when creating their character, you evolve your hero the way you want them to as you play by using the skills you wish to increase often. When your character gains enough overall experience and goes up a level, you are granted a Perk point that you can use to unlock any bonus you wish from the Perk map. This allows for a more natural type of development, as it is truer to real life circumstances. It also means you can start out as a mage, duel-wielding powerful spells and increasing the potency of your magic, and switch to more warrior-like skills with some pickpocketing and haggling on the side.

Increasing your skills comes from practice, practice and more practice. Example: You notice on the Perk map that if you get your Smithing up to Level 100, you’ll be able to make armour from the dragon scales and bones you collect from killing the beasts. You have a lot of leather in your inventory and that’s the only sort of armor you can currently make, but it’s low level stuff and you’re wearing much better stuff. Don’t just sell that leather. Make as many types of leather pieces as you can at the forge until you’ve exhausted your materials. Every time you hammer out a new chestplate or boots you’re increasing that Smith stat. Next, sell those to the nearest vendor with money but sell each one of them one piece at a time. That will bump up your Speech which will help you get better prices as you level it up. It’s thinking like this that will help you power level early on, making battles and other sections of the story easier to get through.

You can also collect Companions who will help you if you so wish to drag them along. Some are acquired by helping with personal quests, while others come bundled with the purchase of one of the several fine homes you can purchase. The companion I dragged around with me when I wasn’t trying to sneak into someone’s home for a Thieves Guild quest was Lydia. She was the housecarl that came with my first home, a cozy two floor home in Whiterun next door to the armor shop. Lydia prefers heavy armor and ranged weapons, and if you make the mistake of giving her magical staffs, you should fear for your life and the lives of any people you might have to rescue from dungeons. She wasn’t always the smartest person to work with, stepping on traps that I clearly went around and then getting stuck on them, which led me to believe the AI needed a touch more time and attention. Lydia made up for it by being a great pack mule. I would load her up with all sorts of ore, materials and random items I wanted to sell and fast travel to the nearest shop just as soon as she stopped trying to kill my magical horse.

But as with every other Bethsoft game of this magnitude, there are just too many unacceptable issues that can potentially ruin the experience for you – especially if you are short on patience.

The biggest problem for me was the amount of glitches that happened in my game, making certain quests and side missions impossible to either continue or perpetually stuck in my queue. Most disheartening of these was when the last Daedric Quest I needed to complete for the corresponding achievement (or trophy if you’re a PS3 gamer) suffered from a massive bug making it so that I could not talk with the target and progress to the end of the quest. Here we are two months and three patches later and there is still no fix for this problem. With all of the time I dedicated to that character and only missing a few achievements, I just can’t bring myself to start a second character, so I am impatiently waiting for the 1.4 patch and hoping my quest line will be fixed.

Definitely not as problematic but just as irritating is the freezing. I will admit that for me personally, it has improved since Oblivion, but that could be due to the fact that I’ve had to cut down on how many save files I’m now using. It also doesn’t hurt that since Oblivion I’ve learned to save a lot more frequently in Bethesda games. I’ve also since learned that I really shouldn’t put every item I want to keep in the same chest or dresser. Now I split everything up and store like items in different drawers in my house. And how to not be a hoarder, which is hard in these games as you want to keep everything that has a cool name and you think might be worth something. Ideally, I have no more than thirty or so different types of item in one place at a time, which meant a lot of over-encumbered trips around Whiterun to sell off various swords, junk armour and potions I’d crafted to level up my skills.

However, the pros and fun I’ve had playing Skyrim far weighs the disappointment I’ve suffered from the game. I wouldn’t call it my Game of the Year for 2011, because in my eyes any game that requires three patches within a month of release and still has major issues does not deserve those accolades. Obviously, Skyrim needed more time in QA before being rushed to store shelves for Holiday sales and I still hold that with digital distribution at their fingertips, gaming companies are using it more and more as a crutch so they can hit deadlines and leave the gamer to suffer the consequences. But enough of that for now.

I had an absolute blast playing Skyrim on a near daily basis from the midnight it came out until I discovered there was no way I could tidy up that last Daedric Quest. Just ask my husband, as he watched my play it until 3 or 4 am every single night and all day on the weekends. I yelled at my housecarl Lydia on a regular basis that you would have thought I renamed her idiot for all the times she stepped on traps I clearly went around or for using the staffs I gave her and nearly killing herself. Hunting dragons and searching for their Words of Power could at times be aggravating, but the rewards were worth every potion sucked down to keep going. My favourite thing to do has always been looting caverns, and Skyrim did not disappoint me, giving me some great ones early on that helped me buy my first home.

Odds are high that I will eventually replay the game with a new character; I really did love the game, despite the issues with quest lines buggering up. Or I may just wait until they announce DLC for the game and take my Hero and her moronic companion Lydia on new adventures. Either way, Skyrim has rooted itself in my list of favourite RPGs, and is one title I would gladly recommend to anyone looking to drop off the face of the earth for a good month or two.