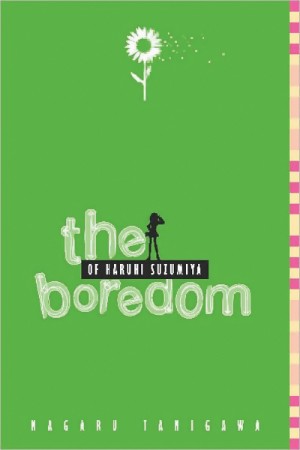 The third installment in the Haruhi Suzumiya light novel series features four fun short stories: The Boredom of Haruhi, Bamboo Leaf Rhapsody, Mysterique Sign and Remote Island Syndrome. Each one of them narrated, as always, by our long-suffering hero Kyon, as he humors Haruhi so as not to destroy the world.

Haruhi just can’t ever sit still, so in typical Haruhi fashion she rallies the SOS Brigade, forcing them into taking part in some crazy adventures. First, she enters the Brigade in a baseball competition, something none of the group is overly familiar with only days before it starts. Then she decides the group needs to celebrate Tanabata, which leads to Asahina taking Kyon through time to deal with a matter he thought had already been dealt with. And things take a turn for the weird when the SOS Brigade emblem on the club’s website goes wonky, somehow tying into a missing person’s report Haruhi decides to investigate.

Closing out this book is Remote Island Syndrome. Summer break has arrived and Haruhi seems dead set on taking part in a murder mystery. Koizumi happens to have a friend offering the club a vacation on his private island’s estate, and she jumps at the chance something sinister might happen. So when the owner turns up dead, Kyon is left wondering if Haruhi’s desires influenced this turn of events.