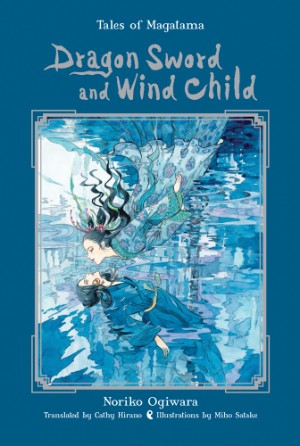 First in the Tales of the Magatama series by Noriko Ogiwara, Dragon Sword and Wind Child follows Saya, a young woman haunted by dreams and a known orphan in the village she calls home. The battle for control of Toyoashihara between the Children of Light and the Children of Dark has never much affected Saya, but everything changes when advocates from both sides approach her at the same time.

Saya chooses to become a handmaiden for the Prince of Light, taking up residence in his home, and discovering all might not be what it seems in the palace. There is another player for the board hidden here, and Saya soon finds that perhaps the Light is not necessarily the right choice for her, especially as she comes to realize who and what she really is – the Water Maiden, the reincarnation of the Princess of Dark.

Will Saya unlock the power of the Dragon Sword in time to save Toyoashihara or will she fall to the Children of Light, thus forcing the cycle to repeat once more?

Dragon Sword and Wind Child focuses heavily on self-discovery and love, using the familiar theme of war as it’s backdrop. It is an engaging story which kept my attention until I finished the very last sentence. This was Noriko Ogiwara’s debut novel, so there are a few areas which could have been improved upon (minor character development, in particular), however, it is a fantastical read. I’m very much looking forward to sinking my teeth into the second novel in the series, Mirror Sword and Shadow Prince, which has just been released by Viz Media under the Haikasoru imprint.

Purchase Dragon Sword and Wind Child from Amazon or RightStuf