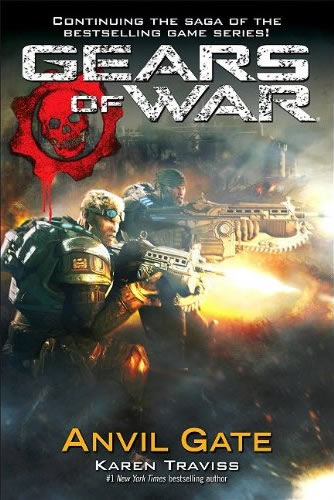 With the Locust pretty much gone, rebuilding the COG on Vectes is going rather well for the remaining Gears. They’ve opened their home to the last of the Gorasni people and have the native Stranded and a few pirates to deal with, but other than that, things are pretty good.

That is until a Leviathan attacks the port and they discover it is far from the monsters they are used to taking on. This one is Lambent and far tougher to take down. As the Gears come across more signs of the Lambent’s reach to Vectes, they find themselves resorting to tactics Victor Hoffman and Bernie Mataki are all too familiar with from the battle of Anvil Gate during the Pendulum Wars.

In Anvil Gate, we learn more about newcomer Sam Byrne and what happened to her father, also a Gear, who fell during the siege at Anvegad under Hoffman’s leadership. The battle that took place there had a major impact on Colonel Hoffman which has made him the man he is today. It’s also where he began his relationship with Bernie, one that would ultimately cause his marriage to fall apart. Hoffman reflects on what happened all those years ago, the fate of the Pesgena islanders led by Bai Tak, and how what he learned then could help him better lead his Gears now.

With the Lambent threatening to destroy all they have worked for in rebuilding on Vectes, Chairman Prescott leaves the island, abandoning his role as leader of the COG. But not before Hoffman obtains hard discs containing encrypted intel that the Chairman had hidden in his rooms. Just what is Prescott up to, and what does he know about the Lambent that he refuses to share? If they can keep these new explosive enemies at bay, they may just be able to find the answers to those questions.