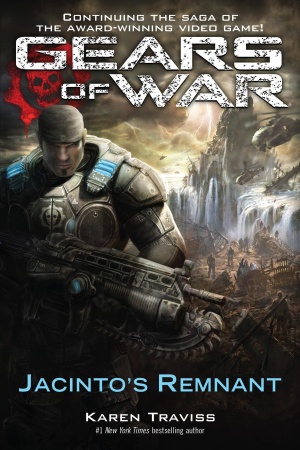 With no other choice but to destroy the last city still standing, Delta Squad and the other remaining COG officers must take care of the survivors while they search for a new place to call home. Hoping that the last of the Locust has been buried beneath Jacinto, Chairman Prescott decides that their best course of action is to head towards their abandoned naval base at Vectes, an island they hope has not been affected by their Locust enemies. Under the leadership of Colonel Hoffman, Delta Squad leads the survivors to their new home.

Settling in on Vectes is not without its road bumps. There are COG civilians living on the island, people who settled here to help support the men and women working at the naval base. Lately, they’ve had run-ins with various Stranded pirates who’ve decided to raid their ships. Not to mention the growing pains that inevitably come with relocating thousands to a new home not ready for such an influx.

While the majority of Jacinto’s Remnant focuses on the rebuilding of the COG on Vectes, there are flashbacks dealing with Prescott’s ascension to the role of COG Chairman, the first people who took on the title of Stranded, and the evacuation of Ephyra. Dr. Adam Fenix has the Hammer of Dawn ready to launch, hoping an early strike will severely hamper the Locust advance only a year or so after Emergence Day.

You can definitely tell that Ms. Traviss has grown more comfortable and familiar with the Gears universe, with the technical blending much better with the main story of the Gears universe. When I sat down to read Jacinto’s Remnant, I had no problems getting into the story; this time, I devoured it whole. Knowing that Ms. Traviss would be writing the story for the third game, the next three books bridging the gap from Gears of War 2 to the final part of the trilogy were all that was on my mind. Putting this book down left me hungry for more and my mind racing to figure out what would happen next. I had grown closer to the characters that helped me get through a very tough time apart from my husband (then fiancee) and wanted to see them overcome these new challenges and kick some Locust butt. I was so glad that I hadn’t let the rough beginning Aspho Fields gave me keep me from the rest of the series.