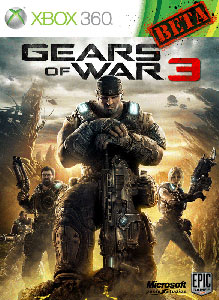 This September another video game trilogy comes to a conclusion. The Gears of War saga has a dear place in my heart as one of the games that helped me get through the long-distance leg of my relationship with my husband. These were games we played together for the cooperative experience, something to do as a couple. And for that reason alone, they served a purpose.

But video games of this magnitude cannot rely on game play alone. There needs to be a strong and compelling story to bring a player back time and time again. Sure you can slap multiplayer into any game nowadays, but for someone like myself – someone who appreciates solid storytelling – that is not what is going to keep your game in my console for long. This, unfortunately, is where the first two installments in Gears of War fell short for me. More so Gears 2 than the original.

Gears of War has taken a lot of heat from gamers for the weak and under-developed plot that strung together the first two titles. Rightfully so. The first title in any trilogy lays the groundwork for what is to come, and they did an okay job. We were thrown into a fight for survival against an enemy that wanted control of our planet’s surface. We worked with what little information we had and, like any regular gamer, expected to have the blanks filled in for us as we progressed.

Gears of War 2 disappointed everyone. Fans only gained a couple of snippets of important information: what happened to Dom’s wife and the reason why the Locust headed for the surface.

At this point, I had pretty much given up hope for a decent ending to the story.

Then I picked up Aspho Fields, the first of the Gears of War tie-in novels. I’ve never been a huge fan of tie-ins in the past as most of them rehash actual game story or bring it up over and over again, adding little new information or background to the characters. They are nice side stories for sure. Aspho Fields started out a bit too dry for me, but as the author found her footing I found myself devouring the story. Here was what I was missing from Gears 1 and 2. Here was the story the game was so desperately lacking.

With each book, author Karen Traviss gave us more and more back story on the Gears universe. We found out the events Emergence Day, learned about the Pendulum Wars and the toll that decades long battle had on the people of Sera. Every bit of important detail that was missing from the video games could be found in these books as they bridged the gap between the ending of Gears of War 2 and lead us to the beginning of the end.

However, this is not where the bulk of your story should be. All of this development should be contained within the original form of media. Not shoved off into tie-in novels that only the most die hard of your fans will read. It is one thing to put out a couple of books or a one-shot comic for your franchise; it’s another to abuse your fans by forcing them to buy all kinds of additional content to get the full story of your universe. When you build a world for a particular audience, you need to cater to them. Don’t make them feel as though all you want is more money, which is kind of how I feel at this point with Gears of War.

I love the books. I have all four of the books written by Ms. Traviss. There is a ninety-nine percent chance I will even pick up the next (and hopefully, final) Gears of War novel, purely because I love well-written books and want to see this whole story surrounding Marcus Fenix wrapped up. And I am excited for the final Gears video game because they smartened up and brought her in as the lead writer for this last game. Reading her books and knowing Gears the way that I do, from it’s mediocre beginnings on the 360 to what it has become for me thanks to the novels, I am going into the final battle knowing that finally we are going to have a Gears game with a real story to bring it all together.

At the end of the day, I know that I will have enjoyed my experience with the Gears series because I’ve made the choice to invest in the story. The same cannot be said for so many others – others like friends who’ve given up on the games because they were let down, or others who will play the third game without knowing everything I know because they just want to see the ending and hope all those hours will count for something. And you can’t fault those people for not wanting to have to buy books or comics that form the backbone of the story.

In a perfect world, Epic would have hired the author of the novels from the beginning and relied on the games to tell the story of Sera’s demise. If there ever was a video game franchise that could use a retelling in the same vein as all the comic book hero re-imaginings we get every other year, it would be Gears of War. Three solid games using everything that’s been published would undoubtedly have improved this series and with some game play tweaks, made it one of the best and well-rounded series of this generation. I really hope that Gears has been a learning experience for the team at Epic, and that they will consider the importance of story development in future titles.

God knows they need some major help in that department.