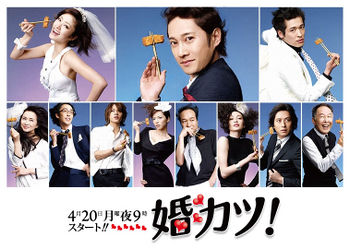 Konkatsu is a Japanese term for marriage hunting; a combination of kekkon (marriage) and katsudo (hunting). In Japan, the search for the right marriage partner is not taken lightly. Konkatsu has become a very popular movement in the last couple years (you can even buy a konkatsu bra which has a countdown clock and pocket for an engagement ring).Our story here begins with a man who has never had the best of luck in his lifetime. Kuniyuki’s timing is just horrible, and in particular at this juncture. He just gave his resignation at work because he found a better job with another company. However, the recession hits when he is about to start his new job, and he now finds himself jobless. His father owns and runs a small tonkatsu (deep fried pork cutlet) restaurant, and tries to convince him to work there while he looks for a job. Kuniyuki refuses though. After all, how can someone who hates tonkatsu work in a tonkatsu shop?

One day, after a long day of job searching, Kuniyuki walks over to his friend Shigeru’s sake stand and comes across a job ad for the district office. The one thing he didn’t know about this job is that you have to be married to apply. So Kuniyuki lies, gets the job, and a whole new world of troubles find him.

Kuniyuki has involved his friends Shigeru and Haruno in his lie to keep his job. As he works at the district office in the department researching the declining birth rates, he and his co-workers start planning marriage parties based on the ones they have attended for “research”. Eventually this plan extends itself to re-invigorating his neighbourhood as the “marriage” neighbourhood. However, there is another plan for his neighbourhood – one that would change it forever.

As he works on this plan, Kuniyuki discovers that he might actually be ready to get tie the knot. And the person he might be looking for hasn’t been at these marriage parties, but right in front of him the entire time.

This series stars Nakai Masahiro as Kuniyuki, Aya Ueto as Haruno and Sato Ryuta as Shigeru.