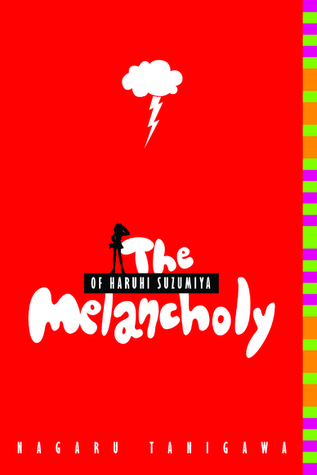 My first taste of the wonderful world of Haruhi Suzumiya came just days after the first episode of the anime aired in Japan. I still had my anime store at the time, and some of my regular customers came to visit. They were excitedly talking about this crazy new anime they had found and told me I just had to watch it.

Twenty two minutes later I was in love.

In this first volume of nine currently available in Japan, our journey’s narrator Kyon begins recounting how Haruhi came to be a part of his high school life. Her class introduction announcing that she wished for any aliens, time travelers, sliders or ESPers to make themselves known to her certainly marked her as someone to avoid. Kyon couldn’t help himself though, and eventually during one of his attempts at conversation with her, she decides to start her own club:

Save the world by Overloading it with fun: Suzumiya Haruhi’s Brigade

Haruhi sets out to create her club and cast the supporting roles, all while including the ever begrudging Kyon. He complains, but only to himself, as he soon learns whatever he says to Haruhi falls of deaf ears.

Rounding up Yuki Nagato, Mikuru Asahina and Koizumi Itsuki, the SOS Brigade comes together, taking over the defunct Literary Club’s room, “acquiring” a computer and really getting to know one another. More so in Kyon’s position than for anyone else, as Haruhi’s recruits each have something they need to share with him.

For myself, the best part of sinking my teeth into the novels means getting to enjoy the story in order, as the anime series pulls from the books in no particular order. For instance, the first season draws heavily from the first two books and the second jumps ahead further into book five. Reading the SOS Brigade’s adventures in the order intended by the author also has its benefits, as you can then place where in the time line you are as you follow the randomness of the anime version.

Commonly referred to as “light novels”, Haruhi Suzumiya’s tales generally span no more than seven chapters and are geared towards the sixteen and up crowd. This is a story told, after all, from the view of a man reflecting on his high school days, which means there is some content not really suited towards a younger crowd. For older readers (such as myself), many of Kyon’s observances towards the females in his group will have you smiling as some of these may remind you of your own high school days.