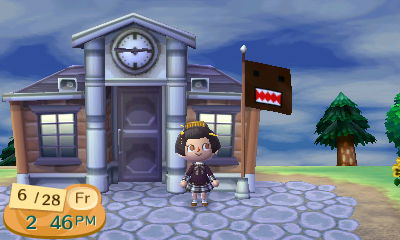 So, I had all these great plans for June and July. I was going to power through at least 2 games a month to whittle down my backlog. Sounds good, right? Productive, too. Well….

I had started Professor Layton & the Miracle Mask which had been sitting on my nightstand since it launched and was neglected when I actually got my 3DS XL at Valentine’s Day because I was addicted to Paper Mario: Sticker Star. I was about 10 hours in when I caved in and bought Animal Crossing New Leaf. The majority of my gaming friends were talking about how awesome it was and I kind of sort of missed the building/collecting/visiting neighbours style of game that Sims Social & SimCity Social (may they R.I.P.) provided me. I wanted to be social without it being Facebook social, if you know what I mean.

Right now, I should be working on finishing up a chapter of the fantasy story I am writing. Technically, I am; the Google Doc is open in another tab and I’ve been pecking away in between laps up and down my ACNL coast fishing. Actually, I’ve probably written more in the past week than I have most weeks this way. I try to be a good neighbour and open up my town gates while I am writing so people can visit, shake my trees and buy new goodies for their mayors. I shouldn’t even be writing this update, but I am. I should be writing my damn story, not planting more durian trees!

WHAT IS WRONG WITH ME?

And the new Borderlands 2 DLC, Tiny Tina’s Assault on Dragon’s Keep was released on Tuesday which means that Matt and I are playing that when he gets home from his late nights at work. We haven’t touched many of those sidequests yet, sticking mainly to the storyline and it is rather challenging for our level 61 characters (my Siren, his Psycho). Last night we made it up to a boss battle in the fourth chapter “A Game of Games” and after an hour of trying to kill the damn thing we noticed it was able to heal itself. It was 2 am and I was tired as hell, so we’ll give that another go tonight.

Which leads me to this: I hate spiders in video games.

Not only because I am an arachnophobe but because…. GAH! They jump all over the place, spit crap in your eyes so you can’t see, and they are generally just gross. Ew ew ew ew is right, Gearbox.

Please excuse me while I run around my apartment to do a spider inspection now.