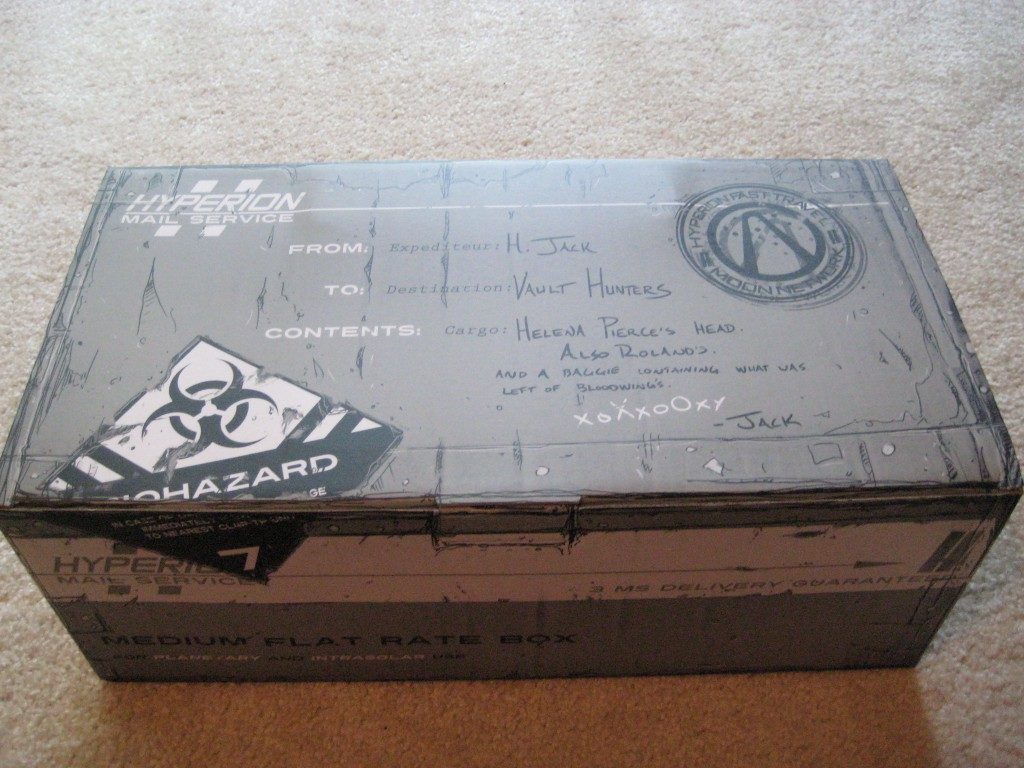 Last week, ThinkGeek announced they had some Borderlands 2 Limited Edition Diamond Plate Loot Chest replicas licensed from Gearbox for sale on the site. Matt and I are pretty hardcore about Borderlands 2, the best coop fun we’ve ever had together, so spending $100 on this was a no-brainer. We sprung for 3 day shipping and it arrived yesterday afternoon, me petting the shipping box every time I walked past it as I had to wait for Matt to get home before it could be opened.

When you open up the ugly brown shipping box, you will see this grey Hyperion Mail Service box, sent from H. Jack (H is for Handsome) to the Vault Hunters. According to the content listing, he is sending us the heads of Helena Pierce and Roland, as well as whatever matter he scraped off the ground after what happened to Bloodwing. Thankfully, no heads are actually inside the box.

Once you open up the “shipping” box, you’ll easy be able to pull out the actual Loot Chest. It is extremely light, way lighter than I expected it to be. It opens by pushing in the small button on the “lock” on the front of the crate. I was really hoping the lift locks were functional but they are not.

And here is a look at the inside of box. No side trays that life out like the in-game version, another disappointment. I mean, we paid $100 for this, so shouldn’t those be in there?

Obviously when you open it up, it won’t be empty. Here are the goodies you’ll find waiting for you inside. They did call it “Swag-filled” after all.

First up, your Certificate of Authenticity and the Goliath mask. The certificate is self-explanatory. Matt was really excited about the Goliath mask until he picked it up and we realized it is one of those Halloween style masks, something that probably costs manufacturers less than a quarter to punch out and mass produce. When I had it in my hands looking it over, I thought it was something you’d expect a game dev to give away as free swag at a con.

Here’s the view from the back. See, not exciting at all. I bet that piece of elastic cost less than a penny. And the odds of it not snapping off? Yeah, exactly.

So far, disappointing. Let’s see what else is in here. How about these crumpled up pieces of paper that…. oh! Well once you uncrinkle them (they were all twisted up inside the crate) it seems you have four pages of the Pandoran Gazette that look like litter from the streets of Sanctuary. A few articles, news and classified ads with jokes that make sense if you’ve played the game.

And then the poster. We thought (incorrectly) that it would be four posters we could frame and hang around the apartment. Nope, it is this.

A single sheet poster that just looks weird with Salvador’s poster not being the same size. I know it really bothers Matt as he is a little OCD about stuff. Another disappointment.

There are also a few sheets of car decals, which we are keeping in the cellophane for now. Vault symbol, Gearbox logo, and the weapons manufacturer logos.

And finally, the Legendary Item Cards. We opened them up to take a look and see what special weapons were in there. I’m not sure they are the same in every pack but we had 21 cards including my absolute favourite rocket launcher, The Bunny. We haven’t redeemed any of them yet as they are leveled to your character at the time you redeem them. Once one of us hits 61 with a character, we’ll redeem them for max level perks. The cards are printed on trading card stock and have a nice glossy sheen to them.

And for comparison only, here is a shot of the Loot Crate with one of our official Portal guns.

All in all, I have to say the official Borderlands 2 Loot Crate from ThinkGeek is a major disappointment. For $100 they could have made the chest itself a little sturdier, heaver. The exterior detailing is nice but it’s too flimsy and I am super careful with the push button because I am afraid it might snap. Most of the contents inside the crate are definitely not expensive to have printed up, especially when ThinkGeek has the resources they do for making things like decals. What you are ultimately paying for are the SHiFT keys for the cool gear and even then those can be found in game even if you do have to grind a bit. This easily could sell for $70 or $80 and net ThinkGeek and Gearbox a good profit.