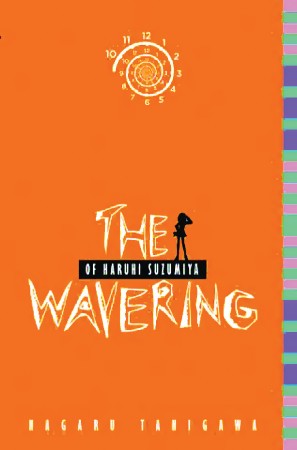 My love affair with all things Haruhi Suzumiya continues with the sixth light novel, The Wavering of Haruhi Suzumiya, which contains five more SOS Brigade adventures, including the novelization of the first anime episode that hooked me in the first place.

First up is Live Alive, in which Kyon wanders around the school festival checking out his schoolmates’ projects before the premiere of the SOS Brigade’s movie. After visiting Mikuru’s cafe, Kyon finds himself in the auditorium and witness to a sight that he really shouldn’t have been too surprised about. The anime episode of this chapter had two of my favourite Aya Hirano songs: God Knows, and Lost My Music.

The Adventures of Mikuru Asahina Episode 00 follows, and I was immediately taken back to the first time I ever watched an episode of Haruhi Suzumiya. I had been transported back to my anime store, sitting on the couch watching the episode on our big screen TV after ones of my regulars had hooked up his laptop so I could see the zaniness.

In Love at First Sight, an old middle school friend of Kyon’s calls up with a very odd confession involving the quiet Yuki Nagato. Even more surprising is the fact that Yuki decides she wants to meet her suitor, something which slightly concerns poor Kyon.

Then we take a trip back to Tsuruya’s winter home as we finally get around to taking part in the winter murder mystery, which happened after the weird events in Snowy Mountain Syndrome (in The Rampage of Haurhi Suzumiya). Koizumi has once more called on members of his society to participate in what he hopes is another successful distraction for Haruhi’s imagination.

The final tale in this sixth book is The Melancholy of Mikuru Asahina. Kyon finds Mikuru in the club room and not acting like her usual self when she asks him to join her for tea shopping over the weekend. Concerned for his friend’s well-being, Kyon accompanies her on what might just be more than a trip to the grocery market.