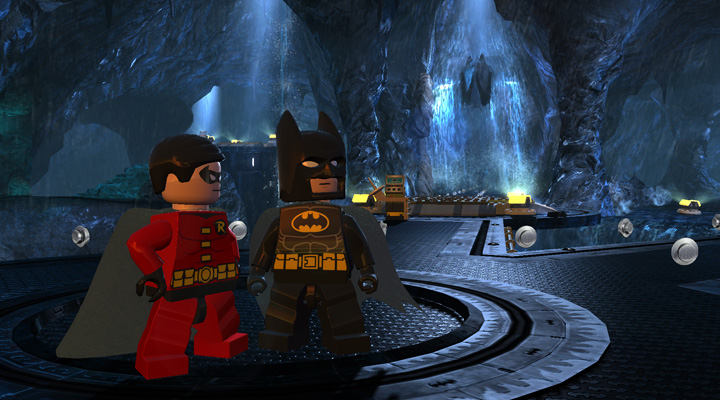 It’s no secret that my coop partner for life and I met playing video games and used gaming to help us deal with our long distance separation. We spent hours upon hours with Gears of War 1 & 2, Resident Evil 5, Catan and other games over Xbox Live. Since we’ve been married, we’ve had to watch how many games we purchase duplicate copies of for two reasons: a) money’s tighter with only one of us working, and b) we dislike split screen gaming so coop titles that keep us on the same couch are harder to come by.

After devouring LEGO Pirates of the Caribbean and having a blast running through the story together, my husband surprised me by ordering LEGO Batman 2 for us. Sure, we haven’t quite finished it’s predecessor, but that wasn’t going to stop us from playing the latest and greatest. Besides, how could we pass up the first fully voiced over LEGO game? Exactly.

A Batman game just isn’t a Batman game without The Joker being up to some sort of mischief. So when approached with an opportunity to partner up with Metropolis’ resident criminal mastermind, Joker and Lex Luthor bring nothing but havoc and chaos to the streets of Gotham City in hopes of once and for all defeating their caped rivals.

Let’s be real, LEGO games all follow the same formula: swapping between story available characters and using unique abilities to make your way through each stage. Because you’re limited in the beginning, Batman and Robin have access to special suits which are crucial during story mode but rendered useless once you’ve unlocked every extra character and can do everything in Free Play. And you’ll have to unlock every character in the game if you want to collect the hidden items in each level and scattered around Gotham. Unless you don’t care and just want to blast through the story as quickly as possible.

The one new stand out addition to LEGO Batman 2 was opening up Gotham City for exploration. Running around the sandbox and looking for hidden items has always been my favourite thing to do in games like Grand Theft Auto and any RPG I’ve ever played. Areas open up depending on how far into the story line you are (or if you have Superman as an active character so he can use those laser shooting eyes of his to melt away the golden locks), allowing you to hunt out gold and red bricks or assist citizens being held up in shady alley corners by gun-toting penguins, half-devoured by man eating plants or some other trouble. Some red bricks will need special characters to unlock (mostly Riddler and Joker based) but there are a few mini-games around Gotham which also hold these game enhancing bricks. Using small toys (ie: cars, boats), you will destroy the targets in waves until your red brick reward appears and kicks you out of the mini-game.

Another thing I didn’t pay attention to at first were the vehicles for purchase. I flew around finding and buying them all without noticing that each air and water vehicle had a timed event leading to a gold brick. Once I had purchased them, their icons disappeared from my map. So when I realized my mistake, I had to place markers for the gold bricks on my map and then fly around the area looking for my rides.

Bringing in the Justice League and expanding the character collection was a smart move. Sure, some of the characters weren’t big surprises by the time the game came out since the LEGO Batman 2 building sets “ruined” that for some people. It didn’t bother me any; hell, I was on the subsite for LEGO Batman 2 sets the day it launched guessing all of the character silhouettes. We even purchased the LEGO power suit versions of Joker and Green Lantern the second we saw them because 1) they are cool, and 2) LEGO Wonder Woman!! And that was Christmas 2011, months before the video game would even hit the shelves. Sure, it would have been preferable to most if the sets launched at the same time as the game, but it just doesn’t always work that way.

As previously mentioned, this is the first of the LEGO titles to be fully voiced over and features many familiar voices from the gaming and anime communities. Laura Bailey, Troy Baker, Rob Paulson and Nolan North (seriously, the list of games he hasn’t had a role in over the past decade is smaller) are just a few of the talented people who brought us more than just grunts and moans. Load screens masked with Vicki Vale bringing us news updates where a much welcome and hilarious addition, as well.

Over a few evening sessions my husband and I had a blast running through the latest blocky adventures of Batman and Friends. Thankfully the few sections of the game with forced splitscreen weren’t too much of an issue, and most of the chase scenes were on rails so neither of us had to drive. (Matt’s better than I am with driving in non-racers; I always have him hop in the driver’s seat and take the gunner position when I have the chance.) But since there are certain achievements that will only be credited to the first player I just had to go through on my own to collect the rest. The second time for me went much more quickly, especially since I didn’t have to argue with the husband over who got to be Superman. Now to finish gathering up the last few gold bricks I need to unlock the final character.

LEGO Batman 2 is available for purchase on Amazon or from your favourite retailer.