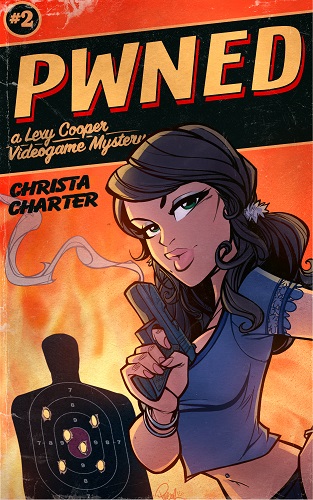 I should have written this months ago, before the follow up Griefed  landed in my lap. I am a horrible person, an awful internet friend, and the only excuse I have is I got sidetracked by life.

That said, I loved Pwned! Getting my hands on another Lexy Cooper mystery was fantastic and gave me a reason to finally put stuff on my hand-me-down Nook. When Lexy does her ex-boyfriend Nate a favour and checks in on a missing co-worker only to discover his body, she reaches out to our favourite homicide detective, Mike Malick, and once more we delve deep into the intrigue and shady business practices of the video game industry.

There is only one issue I have with the Lexy Cooper books; once Christa sends them out, you can’t pry them out of my hands. She does such an amazing job of sucking me into Lexy’s world, making me hate Nate (Team Ash Forever!), and keeping me on the edge of my seat for the big reveal (which I have only ever figured out once in 3.5 books) that I know I’m going to feel the same once her Mike Malick-centered spin-offs are released.

Hell, I gave this woman money for her Indiegogo campaign and ended up a character in Griefed. That’s how much I love the Lexy series. And I do not regret a penny of it.

You can pick up Schooled, Pwned, and Griefed now for your Kindles now, with the first two installments also available in paperback.