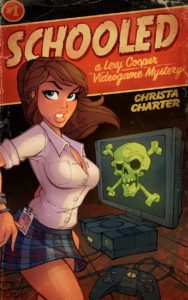 There have been few books that have had my undivided attention from the first word – mostly fantasy novels I’d been anxiously waiting for. I’ve followed Christa’s chronicling of her writing process with Schooled on Facebook as well as posts on her blog, and knew that I would devour her gaming industry inspired murder mystery as soon as I could get my hands on it.

But because I still prefer holding actual books in my hands, my date with Schooled was a bit delayed. Unable to hold out any longer, I pestered my husband into picking up the digital version for Christmas to tide me over until Christa makes her first print run.

Our heroine – a Diet Coke-addicted, foul-mouthed, somewhat sex-crazed 20-something Lexy Cooper –  is dragged into a murder investigation when her uncle Mike Malick, a local police detective, calls her in to identify a body found in the wetlands outside the Xenon campus where she works as a community manager for Xenonline. When she recognizes the young woman as a co-worker from the marketing department and spots a text on her phone from the dead girl moments before she died, Lexy does what she can in-between her job and complicated sex life to aid her uncle in tracking down the killer.

Not only are Lexy and Mike wonderfully created characters, the supporting cast rings true of so many types of people I have met in the industry: the PR/marketing “Barbies” with their degrees who just want to make money (not all PR/marketing people are Barbies, but so many are), the well-meaning but not too hygienic IT cave dwellers who clam up around women, the suits, etc. Having been to various gaming campuses I can say without a doubt that the Xenon campus is as real as it gets.

Partly ripped from her time in the video game industry, Christa touches on some of the dirty, juicy bits like office liaisons as well as hints here and there of how women are objectified in our little world. Some may argue that Lexy is too sexualized and paints a poor picture of females in the industry, but in reality she is doing what most of us did at her age: trying to find ourselves through sex, alcohol, and juggling a social life with a demanding job.

Schooled is a fun, light read that reminds me a lot of the early Janet Evanovich Stephanie Plum books with a touch more sex and a lot more F-bombs.

(And yes, this might be slightly biased because Christa is a friend, but hell, it’s a good book and you should read it!)