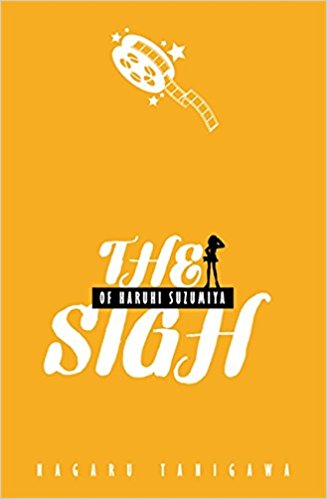 How to make a movie Haruhi-style:

2) Don’t write down a single thing, that way no big shot Hollywood producers can steal your idea

Its time for the school’s annual cultural festival, and Kyon and Haruhi’s class settle on doing a boring survey instead of something in the spirit of the event. Haruhi has other plans, and announces to the rest of the SOS Brigade that she has other plans. She wants to wow the attendees with a movie worthy of a Golden Globe.

Unfortunately for Kyon, Haruhi’s movie is affecting the world around them. If she wants cherry blossom in November, somehow it happens. A talking cat? No problem, at least, not for Haruhi.

But Haruhi’s wishes have the potential to ruin reality, and as Asahina, Yuki and Koizumi try to keep the effects secret from Haruhi, it is ultimately up to Kyon to set her straight before her whimsy takes over. Why is he the only person who can seem to get through to her?

The second light novel takes place about six months after the events of the SOS Brigade’s inception, and skips entirely over the absurd events that Haruhi subjected them to during the summer break, but there is a method to Kyon’s story-telling. Just like the first novel, I was totally engrossed from start to finish, regardless of the fact that I have already seen the catastrophe of Haruhi’s movie told in the anime version. I love Kyon struggling with his desire towards Asahina, his apprehension of Koizumi, and how he has become almost passive whenever strange events happen to the group. Add in the fact that Kyon is completely oblivious as to why Haruhi keeps him around and you will find yourself smiling as I do when he gripes about her.

Now I wait impatiently for The Boredom of Haruhi Suzumiya to be released in July, when Kyon decides to regale us with the story of what happened that summer. I wish they had begun publishing the translations sooner as book four, The Disappearance of Haruhi Suzumiya, will be released as a movie in Japan on Feb 10, 2010.