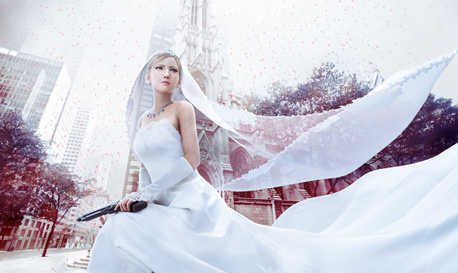 Over a decade has passed since gamers last saw Aya Brea and her clone/daughter/sister Eve (a relationship that confuses many). 3rd Birthday begins with Aya having no recollection of her past, found in a blood stained wedding gown outside St Peter’s in New York. She is recruited by the Counter Twisted Intelligence team and using her special Overdive ability, they hope that her special skills can help the world defeat the Twisted Invasion as she relives past events, that with each Dive she alters history for the better.Fans of the Parasite Eve franchise have been impatiently waiting for this third installment for years, and I fear that with the exception of the most hardcore PE fanatics, 3rd Birthday didn’t resonate with me the way I was hoping it would. I was expecting a spattering of puzzles and upgrading all kinds of cool abilities…. What I got was something way too repetitive, lacking in variety, a substandard and predictable plot, and a scantily clad heroine with a voice that got on my nerves quickly.

Let’s start by getting down and dirty with the story behind 3rd Birthday. At the start of the game, all Aya can recall about her past comes in the form of a dream – a couple standing up in a church as they exchange vows, a girl standing in the front pew watching as the bride (supposedly herself) and groom are gunned down. Aya doesn’t know who these people are, if they really exist. The outbreak of the Twisted began shortly after Aya was found in the street, taking over New York City first, then spreading all over the world. With the Overdive system now ready to use two years later, Aya jumps into the past taking out as many of the Twisted as she can and slowly unlocking pieces of her memory, right up until you finish the incredibly short game.

Obviously, as Aya recalls more of what happened that fateful day, the world around her changes. People who died during her Overdives no longer exist even though Aya remembers them clearly. Some of them even have completely different histories than those Aya remembers. The key people in her life have been taken over in these dives and are eventually referred to as High Ones, entities fighting off the Twisted for their own survival. They have strong interest in Aya and her abilities, trying to stop her from fully piecing together the truth.

When you read all of that, it sounds like there is a lot of substance and material to work with. And there is. It could have been a really great story. Instead, it was a mere six episodes, with the majority of the story telling limited to the very beautiful cut-scenes. The big twist (insert groan here) in the final scene was something I had pretty much gathered by the time I’d finished Episode 3. Maybe it’s just because I watch a lot of Japanese TV and read a lot of translated fantasy and science fiction, but I was hoping for so much more. Plus, it’s a Square Enix game. I love Square and the writing is usually so top-notch. It breaks my heart to find that this time they let me down.

The second most important aspect to a game is always how it plays. What are you doing in the game and how many neat things can you do keeps us engaged and looking forward to what move or ability we’ll discover next. Aya has two abilities: Overdive and shooting things. Shooting things should be pretty self-explanatory. You have access to handguns, automatics, sniper rifles, satellite cannons – all available for a price. Aya always carries her issued handgun and you can choose two more weapons for her to take with her.  Spending the BP you earn defeating the Twisted to upgrade and purchase weapons as you level up is imperative. Some upgrades will help you fill up your Liberation gauge sooner which helps with Overdive attacks.

Overdiving can be a blessing or a curse. Since Aya’s consciousness is sent into the past and not a physical body, she dives into the men and women available on the battlefield. In order to stay alive, she needs to jump from one body to another before the host dies or to access different areas of a map. Each body offers a fourth weapon to Aya’s arsenal and sometimes that fourth weapon is what it takes to blow the Twisted to smithereens. The Liberation Gauge (like a Berserk meter or Limit Gauge from later Final Fantasies) can be triggered once full, making Aya’s attacks stronger until the gauge runs dry, great for taking on some of the tougher non-boss Twisted. Aya can also perform an Overdive attack. When the enemy has taken a certain amount of damage, an orange triangle will appear in front of them. By diving into the enemy you can rip large chunks of health from the inside out. This type of attack also gives Aya the opportunity to find new chips she can place on her Over Energy circuit board, customizable circuitry loaded into whichever apparatus Aya is using to relive the past. Placing chips on the boards and combining them to enhance Aya’s battle techniques is important. Some combos will replenish health or make it possible to heal allies while some chips can cripple her.

Then there is the voice acting. Not the worst voice acting I’ve ever heard in a game, but not the best, either. The three central characters, Aya, Eve and Kyle, are all voiced over by actors I watch on a weekly basis during the regular TV schedule. My biggest problem with Yvonne Strahovski’s Aya was all the moaning and groaning she makes during battle. It quickly gets on your nerves when all you hear from her outside of cutscenes is that noise. If it wasn’t so dominant, if they had scaled it back a lot, it would not have irritated me so much. But there is just too much of it in the game, and it is a real turn off. I’ve heard Jensen Ackles do better (Batman: Under the Red Hood, anyone?) and some of his lines just sounded choppy. The surprise was Molly Quinn (Alexis from Castle). For her first foray into voice acting, she did a decent job. A bit rough around the edges but that’s to be expected. Nothing against any of these fine actors, but I wish the gaming industry would stop pursuing screen actors for voice over roles. Not all of them can do it well. Sure, they might be huge gamers themselves, however that does not mean they can pull it off.

Aya’s support characters weren’t a hell of a lot better. It’s another one of those times when I am left to wonder just how many times the script was read before everyone was thrown into recording and if a voice director was even present. You know, I bet if that moaning and groaning had been cut down to a third of what there was Square probably could have left the Japanese audio track in.

Seems like so far all I’ve done is rip on the game. Why did I bother playing it a second time if there were so many flaws, you ask? Well, like I mentioned at the beginning, I am a Parasite Eve fan and I wanted to make sure that I give a fair assessment of the game I just convinced my husband was worth pre-ordering. It’s not like there is zero fun level. If that was the case I definitely would not have attempted another run. 3rd Birthday has several unlockables, most of which will require playing through several times to collect. There are the fanservice-y outfits that take damage and overtime make Aya look like she ran them through a paper shredder before getting dressed. There’s a shower scene you can access if you perform certain feats in each Episode. (Oh, those shower scenes!) Cheat codes for bonuses you can purchase with whatever BP you haven’t put towards upgrading your arsenal. 3rd Birthday is chock-full of reasons why multiple playthroughs are the main reason for purchasing it.

Knowing what I know now, I would still have purchased 3rd Birthday at launch. Yes, it was a disappointing story, I was once again let down by sub-par voice acting and no Japanese audio track. But the replay value of 3rd Birthday and desire to have every single weapon maxed out is what keeps me going back for more. If this had been a console release, I would be screaming at you to avoid it until it dropped in price. Thankfully, I don’t have to do that. If you’re not a fan of the Parasite Eve franchise you really should pass this over. Unless you love mindless shooting and checking out hot video game girls who wear Santa suits into battle. In that case, you might be able to enjoy the game for what it is – fanservice.