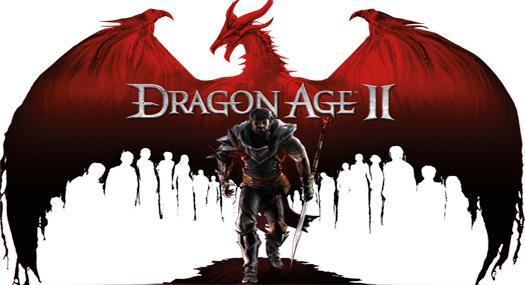 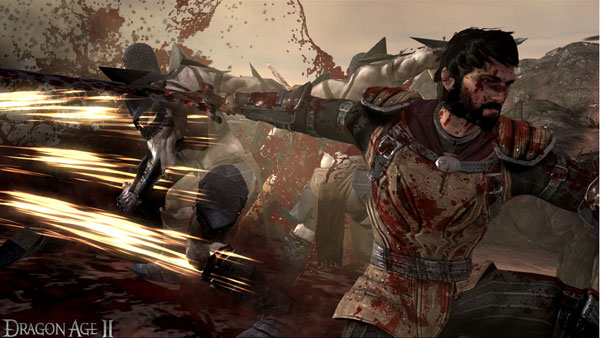 Not really a sequel to Dragon Age: Origins with some of that TV spin-off feel, Dragon Age 2 boasts a more polished feel both in game play and graphics, but falls short in the story development category. If you can’t see how Bioware plans to tie aspects of the two together for Dragon Age 3, you might want to stop playing RPGs.

Potential spoilers lay ahead. I am doing my best to avoid them but since this game does tie into Dragon Age: Origins, it is difficult to completely ignore them.

The story begins with Lothering destroyed by the Blight, as Hawke’s family flees towards the Kokori Wilds hoping they might find passage to Kirkwall. Here they run into husband and wife Wesley (a templar) and Avaline (recently fled from Ostagar), do battle with some Darkspawn, witness the death of one of their own, kill another, and run into Flemeth. And that’s all in the first ten minutes or so, as we are apparently “playing” the tale of Hawke as told by future companion Varric to the Seeker of the Chantry. So far, so good. The story has us speeding along towards Kirkwall and rushing through that first year which takes place at the same time as Origins.

When you finally get to start Act 1, you are living in the slums of Lowtown with your gambling uncle who lost the family home to pay of his debts, with one of your siblings as a companion (more on Companions later on) and Avaline, who became a member of the City Guard. From this point, quests in your Journal will be broken into Rumors, Main Plot, Companions, Side Quests and Secondary. For obvious reasons, you’ll want to make sure you do as many non-plot progressing quests as you can to level up your party as well as hunt down other party members. The main focus of this Act is to convince the dwarf Bartrand to let you join his expedition into the Deep Roads. Your thoughts are to bring back enough treasure to buy back the family home and make your mother’s life a comfortable one.

As with Origins, there are three major political groups in Kirkwall: the Chantry, the Templars and the Circle of Mages. The Mages of Kirkwall have been slowly rebelling against the Templars and their Knight-Commander, and this is one of the major areas you will have to deal with. Another controversy is the shipload of Qunari who showed up on Kirkwall’s doorstep claiming to have shipwrecked and are waiting for others to retrieve them. Their presence is causing some backroom plotting and discomfort among the people. Don’t worry; you’ll be dealing with this little matter as well.

Of all three Acts in Dragon Age 2, Act 1 was my favourite. At this point in the game, everything was still fresh and exciting, the story was pretty solid, and it is during this act that you gather up your companions. Mid-way through Act 2 the story becomes predictable and watered down, moving much too fast for my liking.

There are also way too many pointless “quests” that show up in your Journal. Apparently the people of Kirkwall all suffer some sort of early onset Alzheimer’s and leave things in the darnedest places. You’ll be picking up odd trinkets from crates and chests when suddenly you’ve found a lost item that belongs to another Kirkwallian. You just so happen to be able to divine exactly who it belongs to, so you deliver it and get a small reward. These are great in the beginning when money is harder to come by, but just get ridiculous as the game progresses. Ctrl+Alt+Del has the best comic take on this ridiculousness.

One of the biggest downfalls is the limited area in which you are able to adventure with your party. Your map consists of a daytime and nighttime Kirkwall (some quests can only be completed at night) and the Sundermount region (the mountain, the Bone Pit, and the Wounded Coast). The dungeons (caves, alleys, homes) you visit all have the same layout, but not all areas are available to give some insistence they are indeed not all alike. It just doesn’t feel like much of an adventure when every single thing looks the same.

Most of your Companions will be forced upon you and pretty hard to miss. The first one you acquire is either your brother Carver or sister Bethany. Who you end up with is dependent on what role you choose for your character. If you are a warrior or rogue, you’ll get Bethany; go mage and have the eternal rivalry of Carver. Avaline sticks with you after the incident in the Wilds. Varric, your biographer, is a necessary inclusion and joins you after being denied by Bartrand. You’ll be able to pick up Merril when you deliver Flemeth’s amulet to the Elven Keeper at Sundermount, and find former captain Isabela (remember her?) at the Hanged Man. Another old friend joins you, one Mr. Anders, now bound with Justice and hiding from the Grey Wardens and Templars in the bowels of Darktown.

The one all the ladies want most is the moody anti-magic elf Fenris. He broods, wears dark clothes… if he sparkled I think all the Twilight fans who don’t play video games would convert. The only way to get Fenris into your party is to undertake the Lost and Found quest from Anso in Lowtown at night during Act 1. Miss this quest and you’ll have to wait until you create a new character or go back to an older save point to add him to the team. Romancing him can be difficult as his hatred for magic will make sure anytime you aid or side with the mages (and he is in your active group) he’ll gain Rivalry points. You can pursue romances with everyone except your sibling (for obvious reasons) and Varric. My first character successfully swept Fenris off his feet, and I plan on taking Isabela to bed next (mostly because there is a crafting resource you can only get from one of her quests that you can’t find otherwise).

Anders, Isabela and Flemeth aren’t the only Origins favourites to make an appearance in Kirkwall, but I don’t want to spoil anything for you. Just keep in mind that how you ended your imported Origins game will affect the possibility of certain things and conversations happening later on in Dragon Age 2. If you haven’t finished Origins or want to see how the story would differ with other outcomes, Bioware has other versions of the tale you can import when creating your character. I’m glad I imported my third female character from Origins (a female Warrior who wooed Alistair and became Queen).

Character development and tactics are the same as in Origins, allowing you to create powerful Champions and Companions suited for intense battles. Each Companion has a unique set of attributes that is also affected by their relationship to Hawke. With the exception of protective gear, you can change your party’s equipment and find special undergarments to enhance their preferred look. Enchantments can be added to any gear with available slots for that extra edge. I’m glad there weren’t huge changes in this area and what was tweaked makes the encounters flow much better.

I also haven’t noticed any differences between my female character’s story and my husband’s male Hawke adventure. Here you only have the choice of being a human Champion, but unlike Origins, the sex of your character doesn’t seem to have any affect on either outcome. Disappointing if this is indeed the case and I didn’t miss anything.

Dragon Age 2 is fun, but too short and too predictable. Since it is more of a companion story to Origins, the “2” is really misleading but I understand why they decided to go with a number in the title. The lack of new areas for exploration and the repetitive nature of the dungeons feel like they copped out and just wanted to push this story out to tie Origins and the Champion’s tale to Dragon Age 3. Cameos from Origins were a welcome bonus, but the romance department can still use a bit of fine tuning. We really need to move past the need to throw a bunch of whiny, broody men in as romance options. Not all women (or men) want to have to deal with men that do nothing but mope around feeling sorry for themselves. A non-dwarven version of Varric would have been a great touch. If you haven’t picked this up yet, I recommend waiting until you catch it on sale as $60 feels a little too high for what you are actually getting.