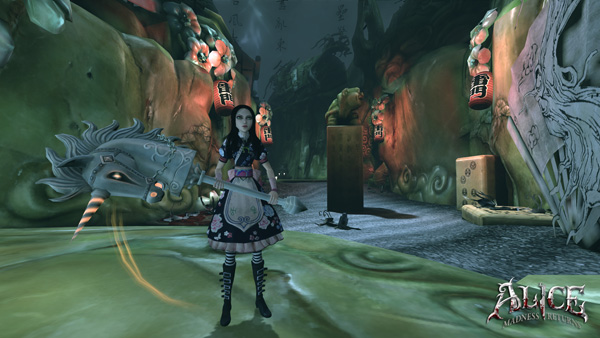 I love the dark and macabre, things that make me jump out of my seat or emit a small scream. Horror movies and games filled with puzzles are right up there in my books and I will go out of my way to watch and play what others consider “bad”. Ages ago, when you could rent PC games and not have to worry about DRM, I seem to recall trying to get my hands on the original American McGee’s Alice and it almost always being out. A dark and twisted retelling of the classic story appealed to me but I honestly don’t recall playing more than a few minutes of the original. Alice: Madness Returns seemed like the perfect opportunity to visit both the new and old versions of the young girl’s Wonderland, thanks to the Online Pass offering the first game for free.

Our young Heroine is struggling with the memories of her family’s unfortunate demise from a fire that engulfed their home. Alice believes she is somehow responsible, and after a long stint in an asylum, she has been released into the care of psychologist Bumby. Because Alice is prone to sudden outbursts, he is encouraging her to forget about what happened so she can move on with her life. After one of their sessions, she sets off to pick up medicine from the chemist, stumbling across a white cat she just can’t help but follow. After a run-in with her old nurse, Alice finds herself falling into Wonderland.

But it’s no longer the Wonderland she remembers. Something sinister is destroying Wonderland, infecting everything it touches. As Alice chases after the cause of the corruption, she realizes that in order for her to truly move on and regain control of herself, she needs to find those memories she’s been trying so hard to forget.

The sinister train running amok in Wonderland has corrupted nearly everything, leaving enemies of all kinds behind to stop Alice from reaching her destination. Varying types of Ruin, Card Guards, and other unique enemies are littered about, waiting to taste the cold, bloody steel of Alice’s trusty Vorpal Blade. You’ll also find a couple of ranged weapons to help deal with the flying pests, a parasol for defense, the Clockwork Bomb, and my favourite, the Hobby Horse. It’s great for smashing things and the horse head changes as you upgrade it, which can be done to your four major weapons by spending your collected Teeth (ewwww!).

Another handy tool in Alice’s arsenal is her Shrink Sense ability. If you are stuck and not sure where to go, Shrink Sense will often help by revealing hidden drawings on the walls and floors with directions or other useful information. You also use this ability to find hidden pathways and heal yourself using the violets you’ll spot throughout each area of Wonderland. Always be on the lookout for these violets and use your Shrink Sense often to find and fit through Key Holes leading to memories, other collectibles, or just setting you back on the right path.

In addition to the memories scattered about each area of Wonderland, you’ll also want to keep an eye out for purely collectible, perk-free Bottles, Snouts to pepper for the Duchess which will open up new pathways or bestow upon you a picnic basket of health and Teeth. There are bonus challenge rooms called Radula Rooms where you will have to perform a task (surviving or killing all enemies, answering riddles, etc) and will acquire red paint used to increase the amount of Roses in your health meter.

When Alice is down and almost out, she can active Hysteria Mode, becoming an invincible slaughtering machine. Her attacks pack a stronger punch and she won’t take any damage while Hysteria is active, but make sure you keep a good eye on the meter. You don’t want to be in the path of a ranged attack with little health remaining in your meter. Dodge often and look for any Roses left behind before Hysteria Mode runs out.

So far, everything sounds purrfectly wonderful. (See what I did there?)

I need to start off the critical part of this review by saying that I really feel as though Spicy Horse was rushed to make a deadline without delays. This really comes through in the game at pretty much every turn. Graphically, what should be a vibrant yet sometimes dismal and dreary world is flat and often underwhelming. There is very little texture happening in the environments, which is a real shame considering the potential there is for mind blowing colour, detail and ultra-realism. This game screams for Tim Burton’s touch, but just never gets to that level.

My next major issue with the game is the collision detection. You’ll be walking normally along the predetermined path when suddenly, as the tiles below your feet change from one type to another, you are stuck. Pushing forward on the control stick does no go because it’s as though your walking into an invisible wall. Oftentimes, you’ll need to jump or back up and jump over the seam to proceed forward. Or you’ll be walking along a hidden path using Alice’s Shrink Sense ability when the game doesn’t recognize that the two tiles are supposed to be connected, causing you to fall to your death. And don’t get me started on the steam valves. Okay, do. Throughout the game there are steam valves you will use to float around or help you reach new heights. When they work properly, they are a fun challenge. When they don’t, you’ll find them turning you around after you’ve lined up your jump point or glitching you in the middle of the steam which keeps it from pushing you up towards the top of the mist as it should. I’ve found that the times when I get the most frustrated with the game happen when steam valves are involved.

The story in Alice: Madness Returns takes a while to really get moving. The first couple of chapters, your really trying to piece together the cut-scene information and data gathered from whatever memories you’ve been able to locate. The chapters are rather long, and you can play 45 minutes to an hour at some points without learning any new details. Once it does pick up, you are quickly able to see how certain memories fill in the gaps of Alice’s forgotten past. Friends have become foes, foes have become friends. I really am enjoying the story of Alice’s decent into madness and watching how she grows as she tries to save Wonderland.

My last big gripe with the game is the abuse of the “Rule of Three”. Yes, it’s been an industry staple since forever, but I think we’ve come far enough since then to evolve a bit and not have to rely so heavily on forcing people to do the same thing three times in a row. In the case of Alice, it is truly maddening. Three tasks to help the Hatter, three tasks to help Carpenter, wash, rinse, repeat. It’s not a very compelling reason to keep the player coming back for more. It’s as though the level designer just ran out of ideas for things to do and wanted to drag out each chapter for as long as possible.

So, I’m sure by this point you are scratching your head wondering why the hell I kept playing if I was running into so many near disc snapping situations. Well, simply put, when the game works, it is fun. It has challenging moments that don’t want to make you throw your controller through a window, tough but entertaining enemies (tee hee hee “Bitch Babies”!), and I am a fan of the dark and twisted.

Like I mentioned several times on my Twitter and Facebook accounts, the game is not a bad game – just rushed. Given more development time and resources, I’m sure several of the issues I had would have been dealt with. And with what little marketing EA has done for the title, it seems they just want to get their investment back as soon as possible, pay the last of the bills and pretend this game never happened. A real shame considering all that Alice: Madness Returns could have, and should have, been.