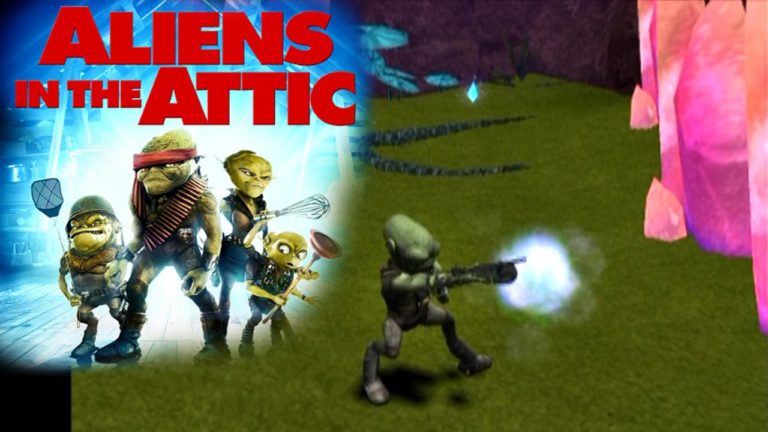 Virtually every family based movie these days gets a movie tie in game to go along with it. Usually these games are not very exciting and kids bore easily. While I cannot compare how closely this game matches the story of the movie, I can tell you about my experience with Tom, Jake and Hannah and the creatures that took over the house.

Tom and Jake are capable of wielding weapons, while Hannah is good for reaching hard to get places by either crawling or double jumping. The boys can hold up to two weapons as well as throw grenades. Household items can be found throughout the house (usually once you rescue an adult) and are used to upgrade your weapons.

Like any level based adventure game, you are going to find yourself blasting through each level until you reach that level’s boss Alien. Health and grenade pick ups are randomly placed throughout, as well as screws which assist with upgrading your weapons. Giant Question Marks can be spotted when there is a new skill or information the game needs to give you. Some boxes can be moved or destroyed, there are moving platforms and collapsing floors to deal with as well.

The neatest but also most frustrating part of the game is using the touch screen to aim your weapons more accurately. By touching your stylus to the targeting circle, you can drag it in the direction you want to shoot which is the best way to take down flying targets and aim for vulnerable spots on the bosses. While I liked this feature, I found it a bit awkward to move my character while doing this, so I reserved using the touch screen for enemies I could battle while not having to move.

The game is pretty straight forward: destroy the enemies, get to level boss, fight, repeat. Kids who were fans of the movie will most likely enjoy the game at least long enough to play it through once, but since you do not have as many character options as the console versions, there is little replay value.

*Review product was provided by Playlogic, and does not affect the outcome of this review.*