August was a relatively slower month for my gaming habit. I took advantage of this time to really learn Tales of Tribute in ESO (Elder Scrolls Online), and planned on really digging into my backlog. Unfortunately, I only tackled one game from my digital pile but one is better than none. Here’s a quick look at the non-MMO games I invested time in during August. And yes, I am well aware that this post is super late. I’ve been a bit of a slacker lately and am doing a bit of catch-up.

Cult of the Lamb

Probably the most recognizable name of the three in this post is Cult of the Lamb. This was an ambitious rogue-style adventure title from an indie developer in Australia, Massive Monster. The last Lamb in all the land, about to be slaughtered in order to avoid the fulfillment of a prophecy, your avatar is resurrected by a long forgotten and imprisoned god. In exchange for saving your life you must grow a following and slay the ones responsible for trapping your saviour.

The core storyline of Cult requires defeating four bosses, each tucked away inside one of the four dungeons. At the start of each attempt you’ll be presented with a random weapon and curse (AKA spell) to help you get through the randomly generated map. Most rooms involve butchering mobs of enemies; others contain new followers, resources, boosting tarot cards, and other surprises. Rogue-type games aren’t generally my thing. Most of the time I just lose interest in them because they go on too long. Massive Monster hit the right balance. You run a map through, head back to your followers to give them tasks, feed them, force them to worship you.

The biggest problem I had was that the RNG for determining starter weapons seemed off. Could just be me but it skewed toward heavy weapons and rarely gave me the lighter, quicker weapons I typically prefer. It’s been a few weeks and some patches later so it’s possible that balancing the randomizer has improved. It was my only real negative of a gaming experience that I genuinely enjoyed. Looking forward to seeing what the roadmap for future content has in store!

This one was a game my husband picked up to play with a friend and thought it might be nice to have a third (me). Another one of those exploration adventures that I tend to enjoy, like Don’t Starve or Raft, where you learn as you go. I’ve excavated a lot of the area immediately around the starting core location. Using the metals and dirt collected, I’m not building out my base a little more. Building rooms, setting up a garden, crafted a storage room or two.

I’ve yet to take down the first boss monster I’ve seen in Core Keeper. It’s a giant blobby dude that spawns tiny blobs while also doing some decent slam damage. The closest I got on my was slowly get him down to half using bombs and arrows. The boss regenerates his health if you leave and come back, so now I am thinking it might be time to rope my husband into joining my game to help me clear this first obstacle. Can I see myself sinking more time into this down the road? Yes, preferably with buddies. Not the highest priority in my backlog, though. 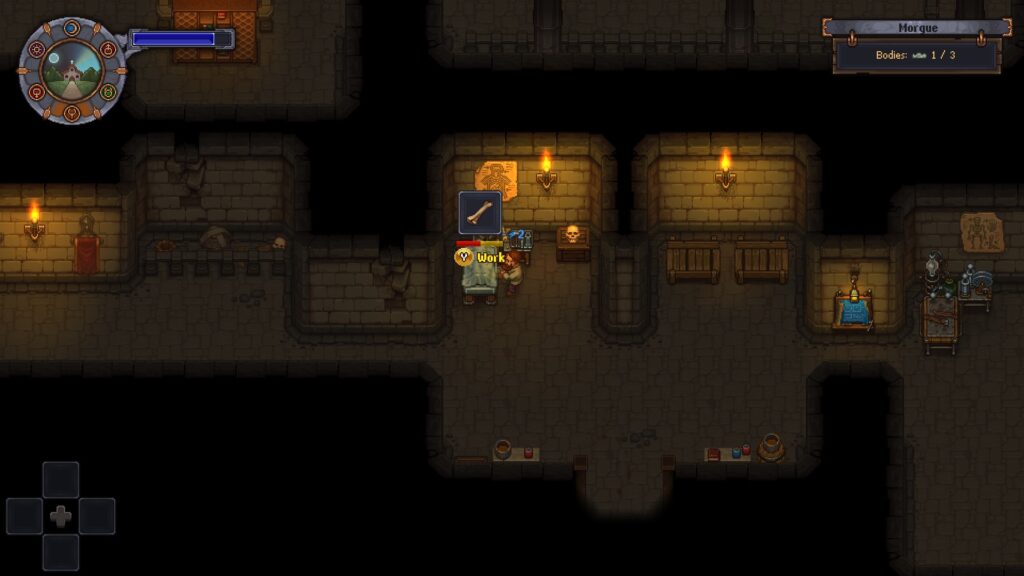 This one was my backlog pick for August. Graveyard Keeper was sitting in that uninstalled “pile” for ages, most likely picked up during one of those big seasonal Steam sales. There are so many farming adventure games out there, so the graveyard twist was the real draw. After being zapped to a time that reminds me of the early days of the Catholic Church, Mr. Keeper (real name unknown due to amnesia) is mislabeled as the new graveyard caretaker. He just wants to go home to the world of technology and his loved ones. The only person (?) that believes his wacky fish out of water story is a talking skull and even then he’s not the most helpful assistant.

Dealing with the dead bodies dropped off by the donkey on a semi-regular basis is your primary job. They need to be prepped for interment before they rot. You can also harvest organs for crafting or flesh for consumption. Meat is scarce and people gotta eat. When you’re not busy with the bodies, you can spend some time crafting and gardening for extra cash. There’s a lot to do in the base game and when you throw in the various DLC you’ll end up so busy you’re plotting out days in advance.

I’m a little sad it took so long for me to get around to Graveyard Keeper. It’s got snark, lots of ways to earn gold, and I have a bar now. Who doesn’t want to make their own wine and resell it to a bunch of idiots wasting money on actual rat races?

And that’s pretty much it for my August gaming. ESO and Fallout 76 dailies take up about an hour or so depending on how much I need to do, and Soul Hackers 2 came out at the end of the month so I haven’t spent much time with it yet. As a huge SMT universe fan I’m super hyped to really dig in. Check back in a week or so (maybe two?) for my thoughts on that one