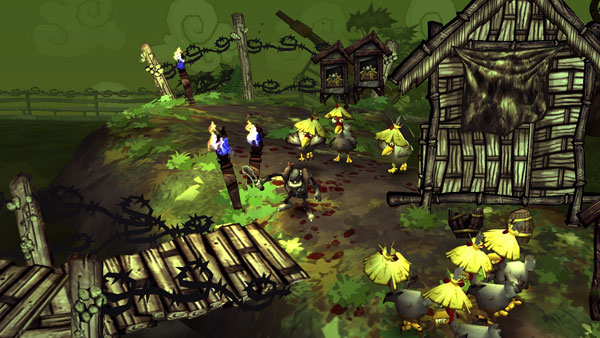 Impressed with the first part of DeathSpank’s tale, I made sure to pick up the second installment before I stole Lord Von Prong’s Thong. It was a smart move because I immediately began playing Thongs of Virtue. Damn Hothead and their addictive game. Damn that Sandy and her womanly woman-ness!

Directly following the events of the first game, DeathSpank Thongs of Virtue puts our Defender of Justice hot on the trails of the remaining Thongs. There is just one tiny thing he needs to overcome to get moving – he needs to break out of a POW camp. A few Call of Duty references, some item collecting and shanking enemies with a potato peeler is all it takes to bust DeathSpank out, fighting his way through a war zone in order to meet up with Sandy for further instructions.

Sandy informs DeathSpank there are four Thongs which need to be found, but no one knows where that forth one is. It is up to DeathSpank to defeat the wearers of the Cuisine, Compassion and Generosity and bring their undergarments back to Sandy so she can dispose of them. Because DeathSpank isn’t one to turn down a request, he gets down to business, making his way through jungles, mountains, the Wild West, and sailing the high seas slaughtering evil chickens and anyone else who dares get in his path.

Not a whole lot has changed in the second part of DeathSpank’s adventure. The menu system and control scheme are exactly the same which I personally loved. There are familiar enemies mucking about with slightly different features depending on where you encounter them, and friendly faces like Strunken and his wife, the Thongolith researcher and the Spelunker still have a few things they’d like your help with, as well. 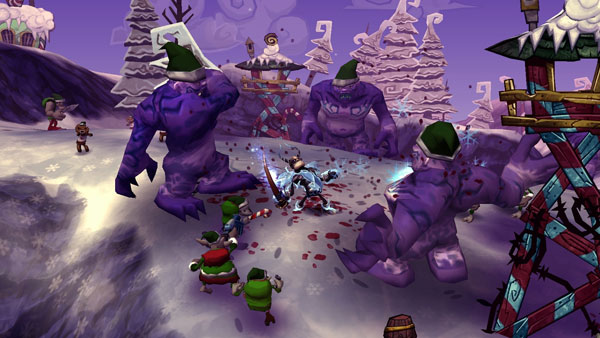 One of the new additions to Thongs of Virtue comes in the weapons department. New cannons, grenades and guns with limited ammo can be found littered on the ground after clearing out an angry mob. These are great in a pinch, especially the cannons and grenades with the larger monsters. I found that the sub-machine gun and disposable pistols were just a waste of an inventory slot for me and I would keep grinding them for money.

If you think you can just blast through the story and grab every achievement, make sure you know there are two that are very much miss-able. I was lucky enough to get one of them by paying attention to the bulletin board in the library. The other one I missed and will have to play through again because I went for a chest I should have left alone too soon.

Thongs of Virtue was definitely meatier than the first game, offering at least double the game time of it’s predecessor. The world was so much more expansive and had great variety to it. There were also a few times when I felt a little more frustrated with the onslaught of enemies playing by myself, but I powered through it or would teleport to another area so I could level up. I think it was easier to level up in TOV compared to the original, but that could have been due to the fact that the game was at least twice the size.

A very solid gaming experience all the way through, even if I did have some minor freezing issues towards the end of my time with the game. The higher price point is completely appropriate on this one. Extremely happy with my investment in the DeathSpank saga and I am looking forward to more from Hothead Games.