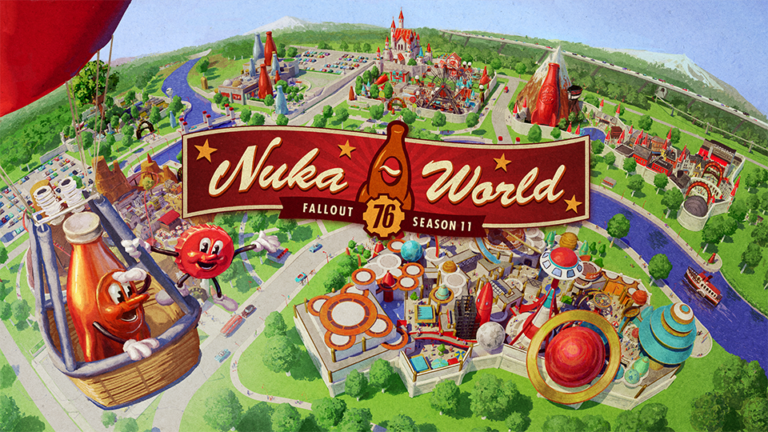 December was a crazy busy month for me, as it generally always is. Holiday baking was mostly thwarted by illnesses in the home that required my attention, so I mostly stuck with games that I could quickly step away from. My ESO New Life Festival runs were kept to just one or two celebrations (just enough to get some event tickets and a couple of boxes). But a lot of my extra time was spent taking part in the events happening in Nuka-World on Tour in Fallout 76.

Nuka-World on Tour opened its gates on December 6, 2022. With it came new events and a new scoreboard, of which I am currently halfway around. There are three common events: the Tunnel of Love, Spin the Wheel, and Most Wanted. Of these, Most Wanted is probably the easiest of the bunch. You “rob” carboard civilians in a Wild West town and defend your getaway wagon from the Sheriff bot and his minions. I’m also a fan of Tunnel of Love. It’s just fixing up the ride area and giving the Mr. Handy that runs it a companion. A real bucket of bolts, but beauty is in the eye of the bot. The last one, Spin the Wheel, is multiple rounds of survival or silliness under the Big Top. Mostly survival. All of these events introduce new weapons to the mix.

A fourth event, Seismic Activity, requires a player to drop a nuke close to the Nuka-World area in the Ash Heap. This disruption angers the giant mole beaver monster, forcing him to surface at the Nuka-Launcher ride. He pops up, forces ultracite crystals to spawn, you destroy those and then he becomes vulnerable to attack. It’ll happen about three to four times depending on how many players are taking part (or so it feels). Seismic Activity is a great way to knock any kill mole miners or glowing creatures dailies.

As for the scoreboard and new items, it’s pure Nuka-Cola merchandising heaven. The only non-Nuka item I’ve noticed is the Patriot skin for the new ammo stash machine. Yes, you can finally take all of that ammo from your STASH box and store it in the ammo box should you be a Fallout 1st member. I did set up the new CAMP companion Leo in my primary active CAMP. He’s a ghoul who used to work Nuka-Cola security. If you give him some Nuka from your reserves, he’ll grant you some words of wisdom based on the flavour for limited time perks. 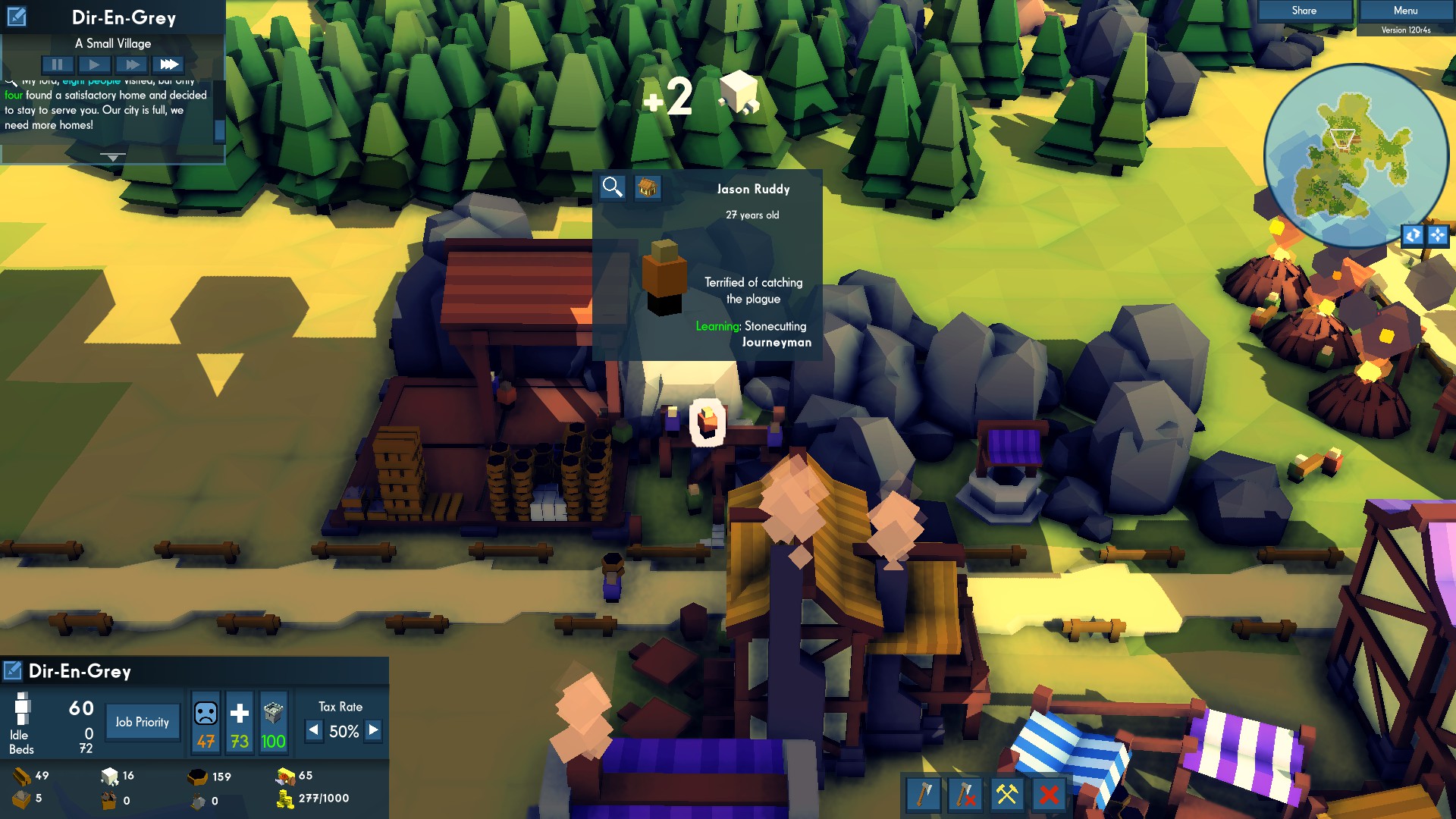 Here’s another game picked up in an old Steam sale and left to collect dust in the library. I was in the mood for another city building game and figured this was worth a shot. Kingdoms & Castles scratched that itch so well! It took me a few maps to figure out what I was doing. It’s a pretty simple system; collect resources like wood and stone, build farms to harvest, storage for crops and materials. New residents will move to your town if there’s available housing and fill any job openings.

You definitely need to figure out the best pacing for your style. I found myself building too far ahead. By that I mean I was building crops and orchards, mines and storage spaces, without the population to fill those roles. Now, you can tweak the importance of each job role. Tax collectors generally lurk down by the bottom of the list, farmers and quarry workers higher up. If there’s a food shortage, just drag that one higher up. Need money to build better homes and roads? Put those tax collectors at the top. Just don’t tax the people too much. You want to keep them happy so they don’t move away. 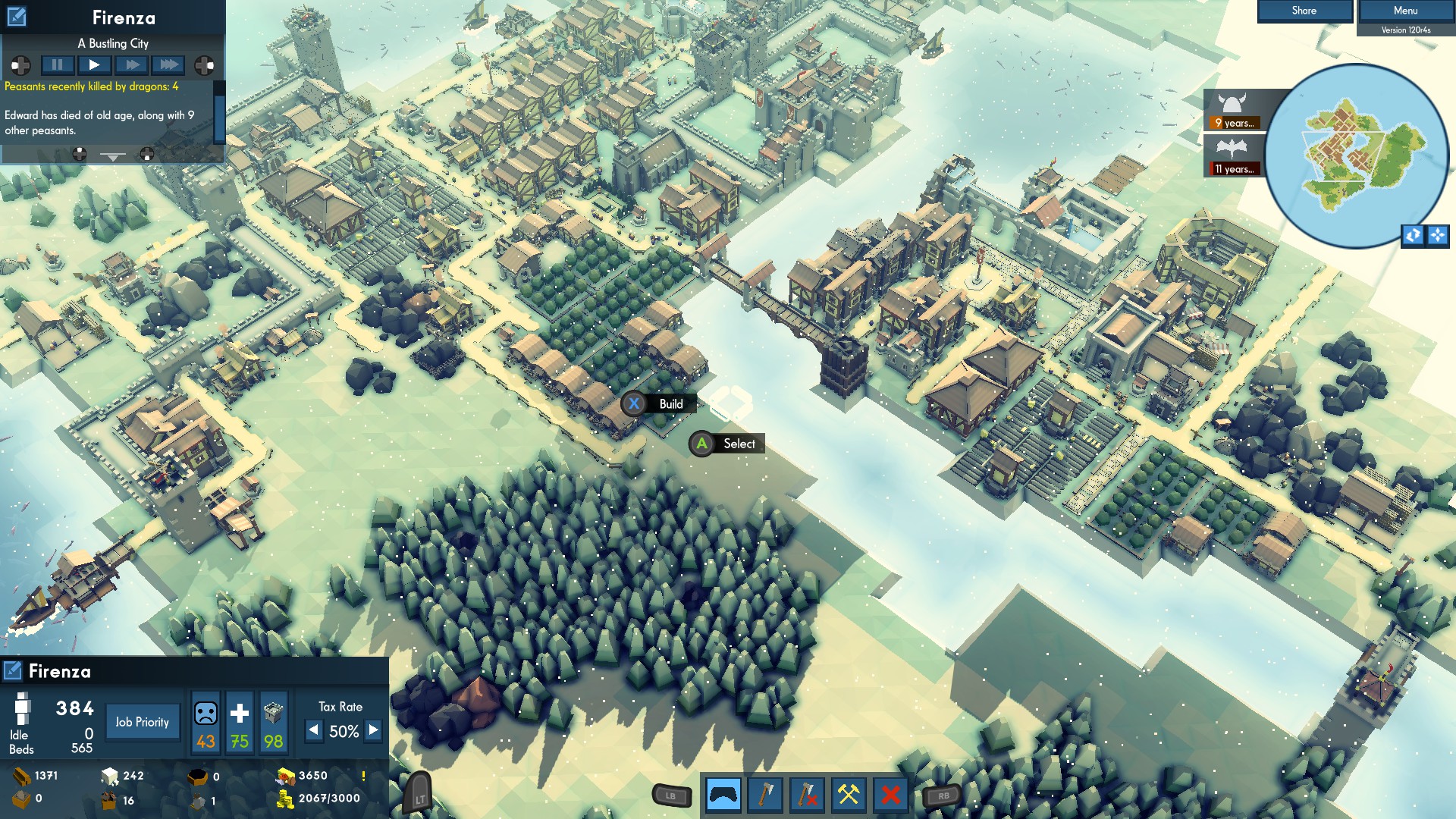 I was enjoying Kingdoms & Castles so much that buying the parks & statues DLC was a no brainer. Anything that helped me beautify my growing neighbourhoods and make the residents’ happiness. It just so happened to be on sale when I bought it but even if it weren’t, $2 is completely reasonable.

An added bonus: you can play this game without enemy encounters. You still have the varying degrees of difficulty available should you choose to fend off the Vikings and dragons. But I recommend this mode if you are looking to unwind and simply enjoy a city builder without too much extra work. 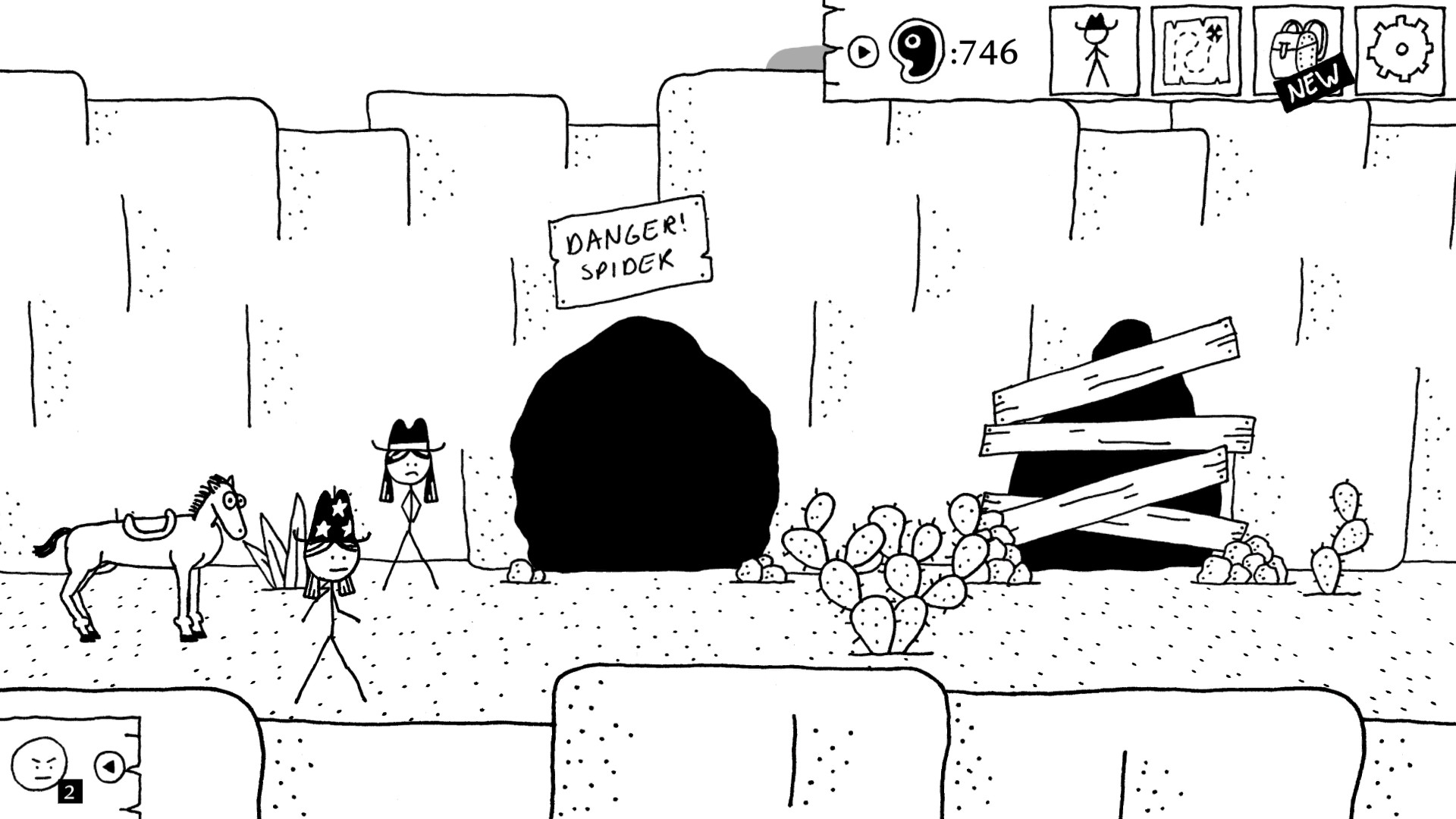 Stick figure people never fail to amuse. A game that combines this art style with ridiculous humour and abuses dad jokes? Sign me up! West of Loathing lived for ages on my Steam wish list. I picked it up during this year’s Winter Sale on the recommendation of a dear friend. She’d played the Steam version of the game this year and told me it was a solid experience. Sure, you can knock it for being a goofy looking game, devoid of colour, things even you could draw if you had the time to. If you did, you’d be missing out on a very entertaining story.

You play as a character leaving home and heading West. There are many reasons you could be heading out; maybe you crave adventure, perhaps to aid those whose lives were disrupted or ruined by the cow uprising. No matter your mission, you’ll make friends and discover some ugly truths along your journey from Boring Springs to Frisco. Wandering around the map reveals new locations, surprise caches, and encounters that maybe you might want to avoid. But it’s all part of growing up. 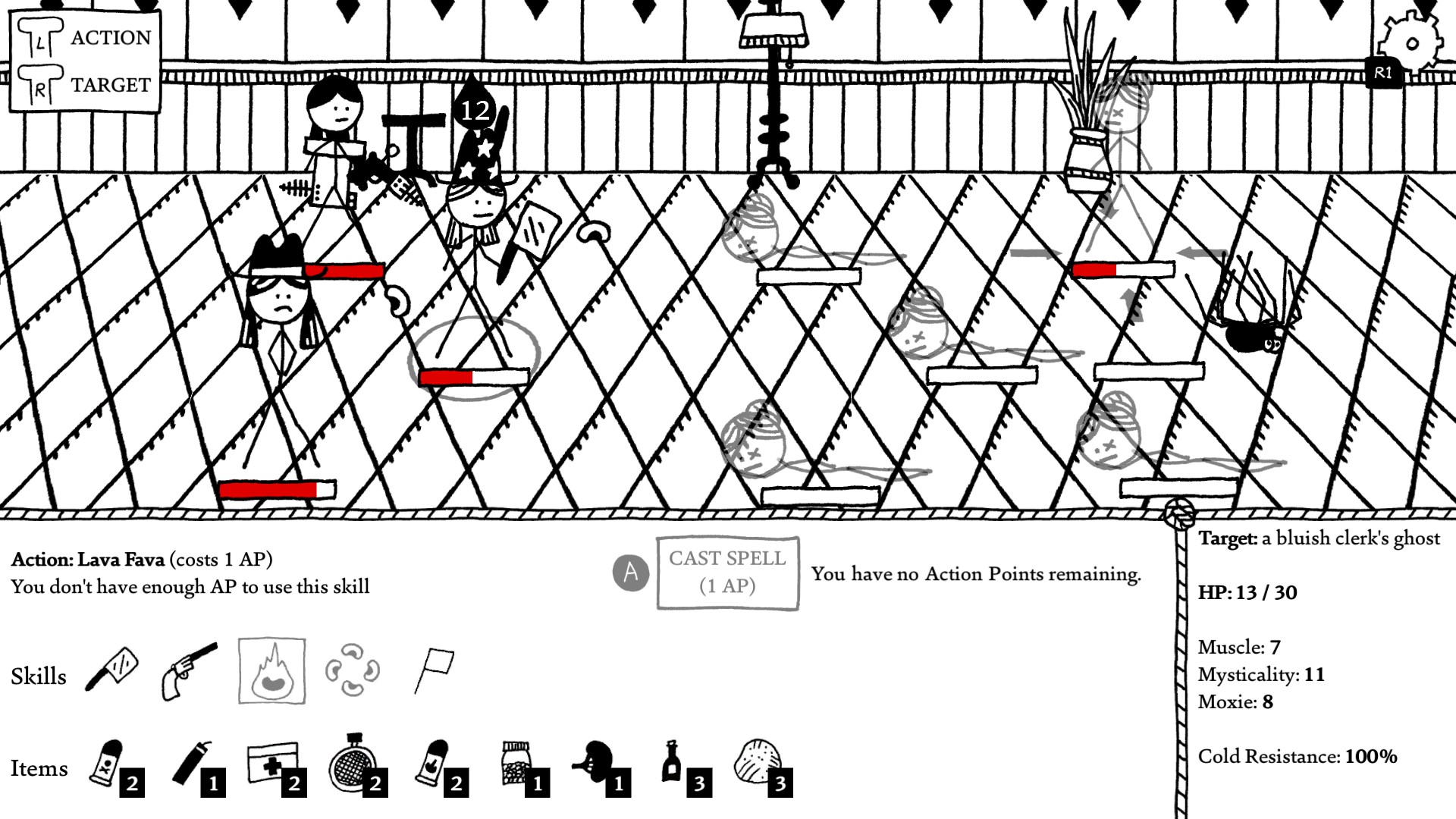 Since this is an RPG, you have classes to choose from (I chose the beancaster class), upgradable perks, and gear to help build your stats. And those attributes of Muscle, Mysticality, and Moxie are super important to keep an eye on. As you mosey around you will come across obstacles that can be thwarted if you have invested your XP wisely. If there’s another way to accomplish a task you’ll see it pop up in your options. Sometimes all you need to do is switch out a piece of gear or consume an item that grants you a boost until you eat something new or take a rest. You’ll also want to invest some of your earnings into miscellaneous items. I recommend getting a crowbar and an axe ASAP. People lost a lot of crates on their travels just waiting to be looted.

Overall, I consider my December gaming a success. I did pick up a couple new PS5 games (Returnal, Horizon Forbidden West) and several Steam games, including Shadows Over Loathing and Outer Wilds. So far I only have a couple of hours in Outer Wilds and about seven in SOL. Looking forward to talking about those more in January!