Status: Still playing Diner Dash, but prefer it on the PC

One of the best known series in casual gaming history, Diner Dash is the one that started Flo’s gaming superstardom. Flo’s job is stressing her out and she decides to open her own restaurant. You will control the new and improved 3-D version of Flo, running around the restaurant seating your guests, taking checks to the pass, waiting on tables and cleaning up once they have enjoyed their meals. Its all about utilizing your time and figuring out how to serve the most amount of customers without sacrificing excellent service.

As with the original version of the game, you start out with just a few tables in a run-down hole in the wall. As you meet and beat your goals, more tables and upgrades to your restaurant will be awarded to you. Eventually you will have several 2-tops and 4-tops to service. Create chains for added bonuses by performing the same action several times in a row. Each level gives you a regular goal which you must meet to clear the level, as well as an Expert goal which gets you the Gold Trophy “I really ate the whole thing!” for achieving this rank on every level. 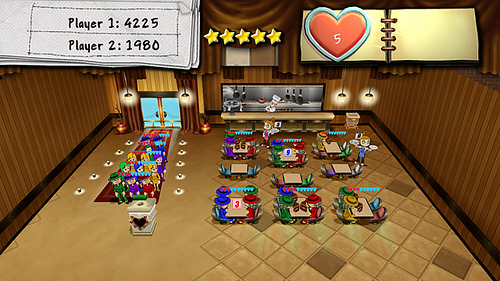 Flo is now 3-D, which moves the player away from the original point and click play of the computer versions that started the Dash craze. Using the left stick you will run around the restaurant and try to earn as much as you can in the allotted time. My only issue was some minor collision detection. If I wasn’t standing in exactly the right spot, I couldn’t interact with the diners or tables, having to waste precious seconds trying to find just the right spot. I also found myself bumping into the tables quite a bit and wasting time trying to run in a giant arc around them.

And then I discovered there are shortcuts. You can tell Flo to bring an order up by pushing Square, take her to the counter to pick up orders with Triangle, and bring the dishes to the cart with Circle. If you decide you want to change what you are doing while Flo is heading in one of those directions, simply move the left analog stick to regain control. Keep an eye out for the flashing upgrade icon in the top right corner. Once you have enough money and it starting blinking away, hit the Select button and choose which upgrade you would like to add to the restaurant. 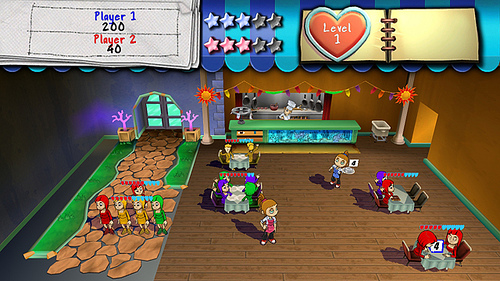 There are four restaurants in career mode for you to complete, as well as added features of Endless Mode and multiplayer modes. You can choose Head to Head mode or Team Dash, allowing up to eight players to compete for bragging rights. I played Tip Wars and Endless Mode online, and both ran very smoothly. (Which is a nice change of pace for me, as most of my PS3 online play has  been brutal in the past.) One of the control modes we tried during this time was Cursor mode, where there is a giant arrow you move around instead of Flo. This mode was a bit clunky and hard to get used to, so I don’t recommend it.

Bringing a game such as Diner Dash to the PSN and XBLA is a great move. It makes the game accessible to people who are not that big into casual games, as well as brings casual gamers to a console where they can play with their loved ones. Nothing is lost in translation from PC to console, which is a huge plus.

Diner Dash is available on both the PSN and XBLA. This review is based on the PSN version of the game.