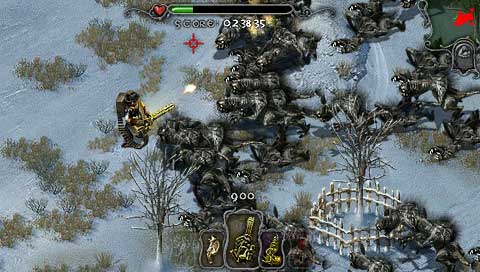 The third game in my PSP Minis collection comes in the form of a top down shooter. Dracula: Undead Awakening puts me in the shoes of a vampire hunter and has me mow down monsters swarming from all sides.

There are three major settings to choose from: Grave Park, Frozen Earth, and Castle Hall. You’ll be moving about the screen with either your analog nub or the arrow keys and using the buttons on the right to shoot either up, down, left or right to destroy the oncoming hordes of ghouls. Shooting is pretty standard; hold down the button on the right that corresponds with the direction you wish to aim and hold it down.

Enemies defeated will leave behind health packs, new weapons and ammo that you will need to stay alive and rank up. Every once in a while, you will will see a Perk has become available to you. Depending on which weapons you have and the level of your character you will be able to select one special bonus. These range from more powerful shots, earning extra points or health, and a wide variety of other upgrades.

Dracula: Undead Awakening has a few different types of game modes. No matter which mode you choose, you will have to stay alive as long as you can. There are no extra lives to pick up, and staying alive is the only way to level up and claim the top scores for each mode.

I quite like having a mindless shooter to play and kill time with while waiting for doctors who are running late or sitting on airport tarmac in Atlanta during a snowstorm (worst plane trip ever). It really is all about luck and skill, but even for myself, never getting past Level 1 didn’t matter so much as just seeing how many points I could rack up. Think Geometry Wars, but on the PSP and with vampires and werewolves. Pretty amazing for only being 13 MB large.

*Review code was provided by Chillingo, and does not affect the outcome of this review.*