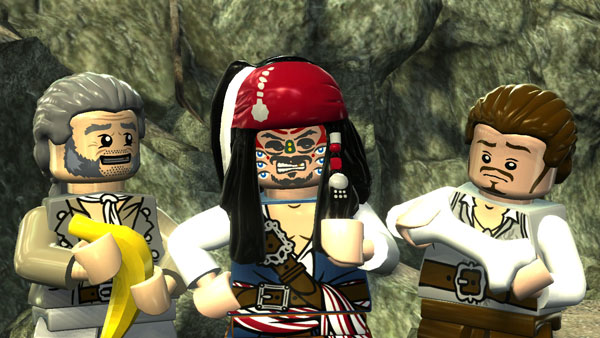 There is just something so perfectly nostalgic about LEGO. You never really grow out of playing with them, building castles, ships, or giant dinosaurs. When LEGO first gave us LEGO Star Wars, I wonder if they thought it would become this successful and lead to such a library of titles. Now here we are, playing LEGO Pirates of the Caribbean barely a week before the fourth movie hits theatres, doing my best to avoid playing On Stranger Tides so as not to spoil the movie for myself or my husband.

For anyone unfamiliar with the LEGO video game library, these games take family friendly movie franchises and LEGO-fy them. All characters are created using the standard LEGO body shapes, while piles of blocks can be destroyed and/or rebuilt to make items that will help you in your environment. There is no voice over work, just grunts, shouts, sighs and other generic audio clips to convey the story alongside cut-scenes and key in-game moments.

LEGO Pirates can be enjoyed as a single player or by playing cooperatively on the same console. I’ve always wished that LEGO titles could be played via Xbox Live or PSN, but they like to stick with single console play. All four movies (Curse of the Black Pearl, Dead Man’s Chest, At World’s End, On Stranger Tides) are included in the game, each one broken into five chapters. When you begin a new game, you will automatically start with the original movie adaptation. Once a chapter has been completed in Story Mode, it will open up Free Play and allow you to take whichever characters you have unlocked with you to scour the level for items you may have missed (or had been unavailable).

For the most part, LEGO Pirates is straightforward. Smash stuff, build with loose LEGO bricks, fight off the bad guys, look for hidden areas, recruit new characters. Each level also contains hidden Mini-Kits (10 in each) which, once all 10 pieces have been collected, you can set afloat in the Port area. Some of these Mini-Kits will require you build or destroy X amount of a certain item in a chapter, so always be on the lookout for jumping bricks or unique destructibles. As Jack, you can search for 8 unique items in each level, some of which you will have to locate to progress the game, others which are just there for fun. To do so, pull out Jack’s Compass and follow the trail to discover these goodies. And of course, there is the title of True Pirate, which is earned once you reach varying Stud totals in each level. Finding all Compass Items, earning True Pirate, finding all Mini-Kit pieces and completing a chapter in Story Mode add to your Gold Brick pile, enabling you to build gadgets around the Port, and open up new areas for you to explore.

You will want to collect as many of those Gold Bricks as possible, as there are Red Hats littered all over the Port for you to discover. These Red Hats offer in-game perks that you’ll need to remember to turn on at the start of every gaming session you play. From multiplier Hats (I currently have a 768 times multiplier in my coop game), to Invincibility and Water Breathing, switching on the right Red Hats can be the extra bit of help you need in finding that last Compass item or opening a secret area filled with treasure.

Almost every character you collect in LEGO Pirates comes with his or her own special ability. Jack can use the Compass, Will can throw axes, Bootstrap Bill and Clanker can ooze through green barnacles. Some can walk underwater without fear of oxygen loss, some have big guns and others can shatter glass with their “singing”. Knowing who has what special ability is crucial for unlocking some of the secrets contained within this game. And make sure you’re collecting those Gold Bricks so you can gain access to the Custom Editor.

LEGO Pirates is definitely not without flaws. Other than the fact that Xbox Live/PSN multiplayer is still not supported, there are a couple other problems I have with the game. First of all, the split-screen gets down right ridiculous at times. Depending on where you are on the map in relation to your partner, the screen will divide in half either horizontally or vertically (normal enough) or on a weird diagonal, making it almost impossible to figure out where you are. Not only is this awkward to look at, but if one player is aiming at a target on one side and the other player moves even a tad, the first player’s aim is lost. There have been many occasions in which my husband and I are yelling at the other not to move so we can target something.

Another big point of contention is having too many playable characters on the screen at once. This became a huge issue in Chapter 2 of Dead Man’s Chest and navigating Calypso’s swamp. With five characters on the screen all trying to do the same thing at the same time, it becomes super frustrating to move. As an example, there is a narrow walkway that you create at one point and everyone jumps onto it at the same time. If one character gets stuck at a junction and is at the front of the line, everything comes to a halt and you need to force others off the walkway or try to jump over them. This can lead to a lot of “dying” in the marsh and is just poorly done. Another spot you need to jump across to perform a task, which would be easy enough if the AI wasn’t trying to force every other character to go with you and push you off the extremely narrow floating debris you are using to cross the gap.

And then there is the camera angle. It’s fixed, meaning you can’t control what you see on the screen. So if you can’t quite make out how far you need to jump to land on the next floating chunk of wood, get used to “dying” until you get it right. Frustrating for sure, but once you get used to the fact that there is nothing you can do about it (and enable the Invincibility and Fall Rescue Red Hats), you can stop threatening to throw your controller at the wall and just do your best to figure out how to finish the level.

While it hasn’t really done anything new for the LEGO game series, LEGO Pirates has been a great coop game for my husband and I to play together. We’re fans of the movies, so replaying them in this fashion together is an enjoyable experience. I feel more compelled to pop this game back into my system than I do LEGO Batman, and I was really pumped for that one when it first came out. There have been some rough patches in figuring out what to do next and trying not to hit up a strategy guide for help, for sure. But I know that once my husband gets home from work the first thing he talks about isn’t what’s for dinner but when are we going to play some LEGO Pirates.