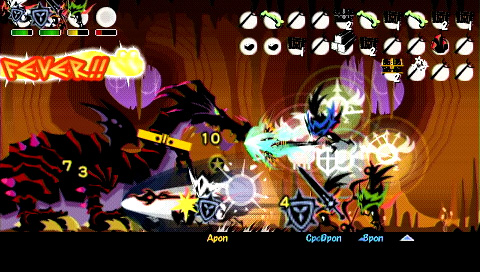 Status: Maxing out the Archer Uberhero skill tree, have unlocked other skill trees

It was beginning to feel as though it would be months before I would have a review of sorts for Patapon 3 together, what with the whole PSN debacle. With no Playstation gaming service and no one around to play ad hoc with, my poor Patapons were being worked to death, replaying low levels over and over again, grinding for cool weapons and attempting to level up as many classes and skill sets as I possibly could. But with delay after delay on PSN services coming back online, I figured I would stop waiting for it to happen and just write about what I was able to do with the game. So here it is.I’ll be completely honest: I skipped Patapon 2. It wasn’t available on UMD and at the time the memory stick I had for my PSP was extremely tiny. I also prefer physical media formats, but since I couldn’t afford to import a disc from Japan I just never played through the story. Which meant that for this third game, I needed to do some YouTubing.

The Patapons opened a mysterious box that turned the tribe to stone. You, the Great and Almighty Patapon savior, manifest yourself as one of these lovable eyeballs in order to free them from this cold entombment. Thanks to a silver Hoshipon, you are now the Uberhero, ready to defeat the Seven Evil Spirits unleashed from the box. You will have aid from Tan, Kon, and Chin (three Patapons that were freed from the stone) and Hatapon, your flag bearer. When you begin a new game of Patapon 3 you will need to select the primary weapon style your Hero will wield. The available options are Spear, Sword and Ranged. I chose Ranged weapons for my Hero to start adventuring with, and eventually was able to access all three types of arms.

In addition to the three weapons styles, you can also learn classes within each discipline and unlock new skills that can be combined to make your team powerful. For example, as a Ranged Patapon I started out with the Yumiyacha class, the basic archer wielding a crossbow. As I leveled up this class, others in this discipline unlocked for me. Like the horn tooting Wondabarappa who blasts sounds from his horn as his attack, and the Pingrek, a healing Patapon who can freeze enemies but more importantly heal your party when you use the right combination of songs. Leveling up each of these classes will unlock more classes and open up more skills you can equip. Let me tell you, having Antifreeze or Fire Resist skills in levels that are freezing or desert-like sure do come in handy.

Patapon 3 remains true to it’s rhythmic roots and plays just like it’s predecessors. Banging out the correct drum combinations, you’ll direct your Patapons to march, attack and defend as you visit new locations. Most of these missions can be played solo, however there are a few special missions that will require you to team up with other Heroes via ad hoc or PSN play. As well as your standard missions, there is also the added Battle Ground locations, where you will take on the evil Dark Heroes you’ve been chasing and fight them using mini-games: Race, Missile Range and Capture the Flag.

New to Patapon 3 is accessorizing. Before you created Rarepons by making them with rare materials, but now you can choose what weapons and armour your little eyeballs march around in. New items can be found in chests in each level, sometimes for clearing the level, others for taking down the enemy. Weapons and gear can be upgraded using Ka-ching and materials at the Blacksmith, and upgrading one type of weapon in your own Smithy to level 11 will make it an Uber Weapon. You can only have one type of these at a time, so if you decide that you want to change from an Uber crossbow to a sword, your other weapon will drop back down to level 10. However, weapons upgraded at other Blacksmiths when joining a multiplayer game will retain their levels, encouraging you to get together with friends. There are some items that cannot be upgraded in the Blacksmith and only obtained in battle. These will have an orange background in your menus and have special names.

Another important change to make note of is that when in Fever mode you no longer invoke Miracles. Instead you call on Djinns, who will resurrect any fallen comrades, heal up the party, and provide some groovy Fever music for you to bang on the drum to (not all day, just for 10-20 seconds or so). You’ll bang out some powerful attacks with lots of Oh!s, Yeah!s, Ah!s and Uh!s to launch at offending monsters. Out in the open, your Uberhero will rejuvenate himself over time when he is defeated, but in dungeons using the Djinn is the only way to bring him back. Inside and didn’t summon a Djinn before you finished a floor? No worries. Your unused summons stay with you, meaning you can have up to three of them for the last floor in a dungeon with three levels. Outside you’ll only have one summon, so make sure you use it wisely.

Now for the not-so-fun parts. There will be grinding – lots and lots of grinding – in order to level up your classes, unlock new ones, and get loot. Once you rank higher than the recommended level for some missions, you won’t earn any EXP for successfully completing it. If you have little to zero patience for grinding, then do not play Patapon games. The other downer is that you won’t learn the Pause Song right away. You have to find it. The song can be found in the March and Jump Practice at the Practice Grounds, but you need to march those Patapons pretty far in order to obtain it. I’ve made several attempts and just can’t seem to reach it. I really wish they hadn’t made it so tough to get.

While it really is more of the same, Patapon fans like myself will devote hours to leveling up our Heroes and farming for loot and items. The humour is still here, the story continues along the same path it has been for the past three and a half years. It remains a catchy, fun and sometimes frustrating title that is appropriate for all ages and really evolves with the multiplayer addition. Since the PSN went down shortly after I was able to get my copy of Patapon 3 connected to the service, I haven’t had enough time with the multiplayer to talk about this game mode. I hope to rectify this as soon as the service is stable and back online and will share my thoughts on it at that point in time.