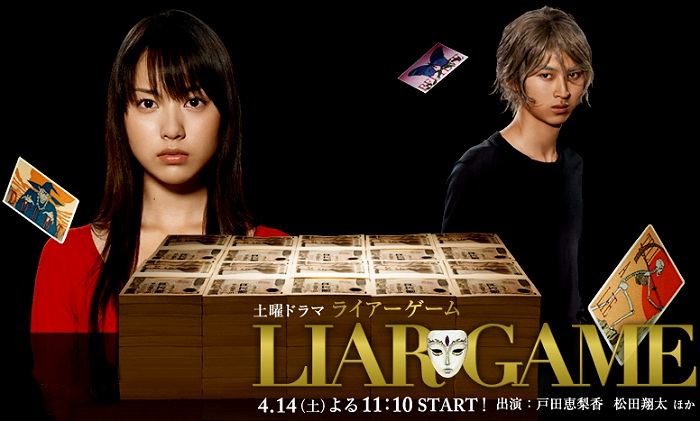 How would you react if one day you came home and found a box of money waiting for you?With nothing more than a suspicious looking letter accompanying this box, Nao Kanzaki finds herself part of the Liar Game Tournament. And at the very bottom of the case containing the mystery money there is a video cassette outlining the rules for the First Round. She is to face off against a former teacher to see who can gain the 100 million yen, or even part of this huge sum, from their opponent and win the first test.

Nao hasn’t a dishonest bone in her body, and her money easily falls into the hands of her former teacher. Completely distraught and acting upon advice from a very suspicious police officer, Nao seeks out a young swindler just released from a short jail sentence. Shin’ichi Akiyama brought down a fraudulent company that saw his mother kill herself out of despair. In Nao, he sees the same innocence that ruined his mother, and he does not want to see the same thing happen to her.

In general the rules are quite simple, if you win the game, you keep your winnings, and the LGT will collect the original amount of money given to you. If you lost your money to another player, then you are in debt and the LGT will collect that money by whatever means necessary. You can also withdraw from the tournament by paying back a specified amount of money to the LGT, and keep the balance of your winnings.

Liar Game explores the deceitful side of human nature while also showing the honest alternative. While Nao is the only person in the Liar Game Tournament who demonstrates such honesty, you get to witness how her positive attitude and her desire to see no one hurt by the game affects those around her. Shin’ichi’s past as a swindler is put to good use as he helps keep Nao out of trouble, but also helps her manipulate the game in order to see as few people hurt as possible.

Liar Game is based off a very successful manga series in Japan of the same name. This first season of the show covers the first three rounds of the Liar Game Tournament, with second season hosting four rounds and a semi-final showdown. The show stars Erika Toda (Misa Amane in the Death Note films) as Nao Kanazaki, and Shota Matsuda (Sojiro Nishida in Hana Yori Dango) portraits Shin’ichi Akiyama.

In the second season, Nao and Shin’ichi have gone their separate ways since the last round of Liar Game and it has been months since anyone from LGT has contacted them. Without warning, Nao finds an invitation in her mailbox calling her back into the game. Certain that she will see Shin’ichi by accepting, she heads for the secret location. Not only only does she find Shin’ichi and a few familiar faces from previous rounds, but an old class rival of his, Katsuragi Ryo. The forth and semi-final rounds span the nine episodes of Season Two and lead up to movie.

With Akiyama and Fukunaga (introduced in round two and quickly became an ally of Nao’s) participating in the final game, Nao is confident that Akiyama will destroy the game in her place. She is surprised when one of the LGT representatives approaches her with an invitation to take the last spot and tells her she needs to save Akiyama. Nao will do anything to save Akiyama and readily accepts the invite, heading to an island containing the final battleground, the Garden of Eden, and hoping she can “align the red apples”.

The original manga is not currently licensed in North America.