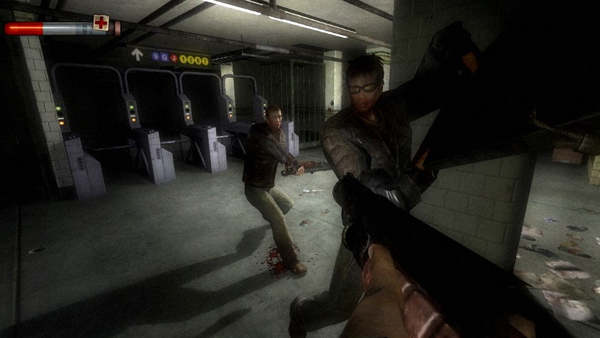 In an attempt to work through some of the games collecting dust in my backlog, I cracked open Condemned: Criminal Origins last week, promising that I would get at least one of these cleared out before I lose all track of time with Dragon Age 2 and Patapon 3. Condemned was one of the first titles released for the 360 so I knew I might have to be a tad more patient with it than I normally am. I pushed past the obvious first generation game issues and discovered there was a pretty decent game to be enjoyed under that M rating label.

Agent Ethan Thomas is one of the brightest stars in the FBI. His proven track record for hunting down serial killers makes him highly sought after. When police call him in believing they are on the trail of a murder known as The Match Maker, Agent Thomas joins two armed officers in an abandoned building to investigate the crime scene. Shortly after checking the scene, the men find themselves chasing a suspect through the building. But the killer gets to the police officers before Agent Thomas can save them and sets up the FBI agent as their killer.

On the run from your former employer and hoping to find the man responsible for ruining your life, you’ll control Agent Thomas as he follows the trail of Serial Killer X. You’ll visit the abandoned and neglected areas of Burnside, crawling with bums and addicts who won’t hesitate to thwomp you in the back of the head with a pipe or 2×4 riddled with nails. In-between fighting off these crazies with whatever you can find to defend with, you’ll collect evidence with the high-tech FBI tools no one thought to take away from you when put on suspension and get some help from Rosa, your friend in forensics who still has faith in you.

Controlling Agent Thomas really tried my patience. Yes, it was one of the first games for the system, so there were bound to be some areas that felt rough around the edges, and this was the one that gave me the biggest problems. His movements were much slower than I am accustomed to with FPS and RPG titles like Gears of War and Fallout 3/New Vegas. When being attacked from behind there was no quick turn button and I’d find it difficult to get in a timely block. Getting Thomas to run was worse. To make him sprint you have to push the left stick in then push it forward with it still clicked in. My controller would click in but not hold that click in place, so when I pushed forward to sprint it only worked about 10% of the time and much too briefly when it did.

Attacking and blocking were another point of concern. Left trigger to block, right trigger to attack. Simple enough. However, you can’t hold a block. Once you pull that trigger, your weapon moves up into block position for about 2 seconds. If you don’t time your block exactly you will either be too early or too late. Most games have a bit of leeway and will let you hold a block, especially on easy mode. Unfortunately not this one.

Weapons are limited to what can be located in the environment, so a lot of the time you’ll be prying 2x4s off of abandoned pallet flats or small pipes from walls. There are firearms that can be recovered from fallen enemies or found in locked cabinets. Those have a limited supply of ammunition and once they run out can be used in melee combat until they become damaged. Your best bet is to drop them as soon as you can find another pipe. I was most impressed with how realistically Agent Thomas wielded sledgehammers. Those clunky buggers don’t swing fast in real life and they were just as slow but powerful in Condemned.

My only gripe with the story behind Condemned is this hinting that there is something more to Agent Thomas and then not delivering any real information. He has these flashes, “visions” of what Serial Killer X is doing, gets sick from them, but they don’t really give you much more than that. One character tells him that he is different, special, has a unique talent, but exactly what that is remains to be revealed. Even in the final battle you aren’t really sure what is going on with the star of the game. Maybe when I get around to playing the sequel I will get the answers I was hoping for. 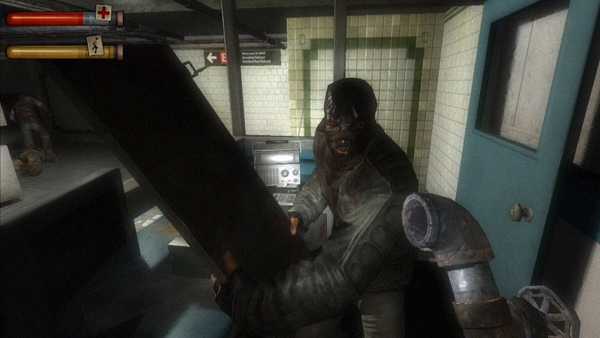 Sometimes it’s good to find an older game to play and reflect on how much has changed since the launch of a system. While the controls proved to be a major issue for me, I appreciate being able to compare what was to what is. The overall mood of Condemned accomplished quite a bit of what it set out to be – a grungy horror game that made you think twice about how to approach the next corner, always on the lookout for where that next attack could come from. I had a good time with it, a better time than I thought I would, and I put the game back on my shelf with a good taste in my mouth.