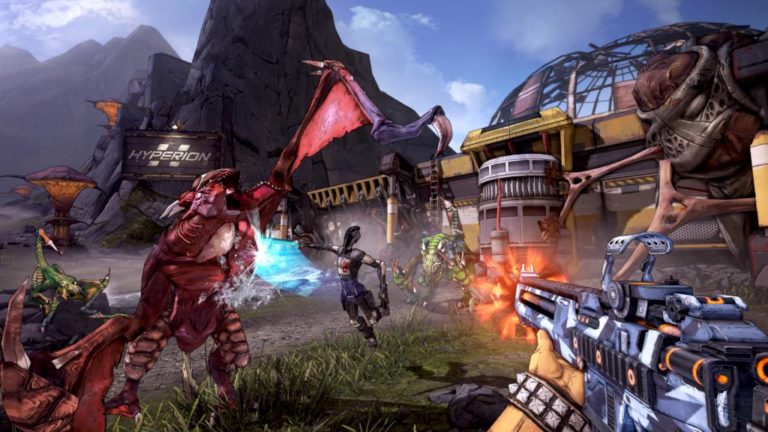 As a married gamer, there are times when you just want to have fun playing a cooperative adventure together. Sadly, it had been quite some time since Matt and I sat down and spent hours upon hours gaming together. Sure, there was that period back in January and February when we jumped on the Skylanders bandwagon, but as much fun as that experience was, it was not the massive gun toting, free for all killing spree type of game that really gets us going.

The last time we had an action shooter with bad language and a plethora of weapons at our disposal was September 2011 when Gears of War 3 launched. Every night after work, Matt would come home, we’d scarf down whatever I made for dinner, and blast our way through chapter upon chapter of the Gears finale. He didn’t even laugh at me when I cried over (SPOILER ALERT!!!) Dom dying (/SPOILER ALERT!!!).

Enter Borderlands 2. The original has long been on our list of games to pick up just as soon as we 1) have more time/bookshelf space, and 2) clear out some of our collective backlog. So when I won a copy of Borderlands 2 from GamingExaminer after hearing all of my gamer friends raving over the sequel, I was over the moon and Matt was bouncing off the ceiling. Little did we realize at the time that it would consume our every waking moment together for the next month. 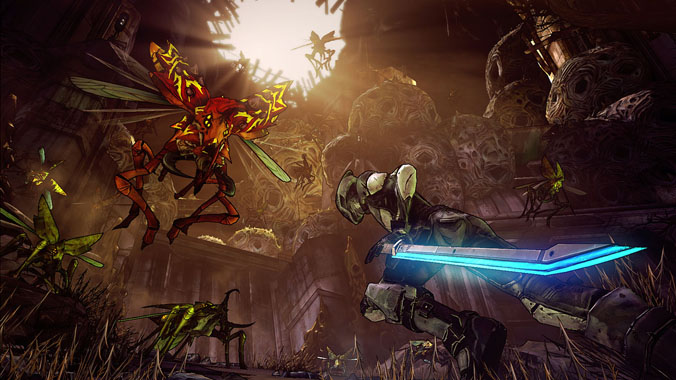 With Matt playing Zer0 and myself choosing to start with the siren Maya, we have battled our way through Pandora one and a half times – the half being that we made it to the halfway point in the story line last night playing through in True Vault Hunter mode and reached the level 50 cap. For the most part we have a system down, I pick up a bunch of loot I either want to equip or sell, Matt holds onto everything and is usually holding 3 items more than his backpack can fit, and when purple or orange loot drops we fight over who gets what. If the drop is character class specific, whichever of us is using said class gets first dibs, but should that drop be a really awesome weapon we spend five minutes arguing over it. (The five minutes being because that’s how long it takes Matt to figure out what he has to drop to make room for an item any time this happens.) And then there are the instances where I become Matt’s pack mule because I don’t feel the need to keep all of the unique items more than ten levels below my level cap. Because this is how married gamers play together.

Not everything is about the loot. Sometimes it’s about finding all of the Easter eggs or completing Badass challenges for tokens and new character skins. Like the afternoon where I had to let Matt use his Deception skill on everything until he unlocked a character head for Zer0 that he ended up losing two days later when a rare glitch related to storing information on his Xbox gamertag wiped out all of his tokens, ranks and customizations. Now I keep my eyes open for player skins at the slots, in poop piles and vending machines to help him regain some of his lost wardrobe. Because this is what unemployed wives do for their husbands while they are at work.

And when I go to bed at night dreaming about fighting over loot drops and running to save Matt’s assassin from having to respawn, I go to bed knowing that tomorrow I’ll get to do it all over again and love every second of it.