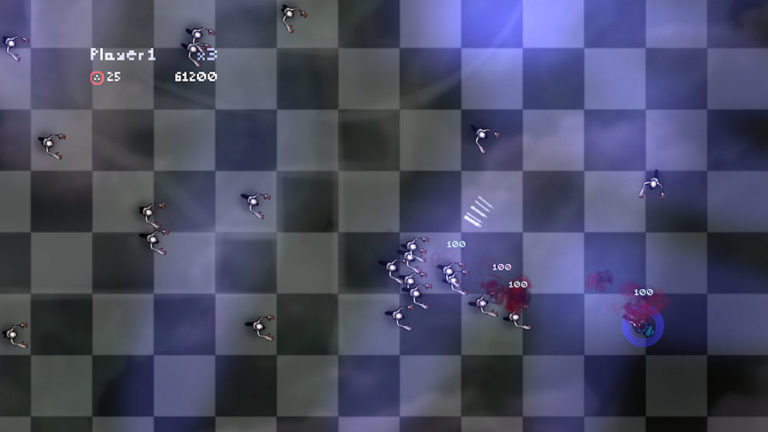 I have never downloaded an Indie Game (formerly Community Game) ever. But you know me and zombies. I love them. And any game that has zombies and a catchy tune I will be all over like a zombie is all over brains. I MAED A GAM3 W1TH ZOMBIES 1N IT has both of those and based on those two facts alone, I spent the 80 MS points (roughly $1) on the game.

Brought to us by the brilliant minds behind Dishwasher: Dead Samurai, you control You, a one man (or woman) army defending yourself from wave after wave of zombies and other random enemies, all while listening to the most AMAZING song of all time.

The game controls almost exactly like Geometry Wars, and even though I suck horribly at Geometry Wars, I still enjoy playing this game. (Did I mention the soundtrack is Spike Video Game Award worthy?) You move about the screen using the left thumb stick and aim with the right. Make sure to pick up the power-ups scattered all over the field without letting the zombies eat your brains.

Also, I have to make mention of the press release, because it is honestly the best press release I have read in a long time. Here is an excerpt for you!

“I MAED A GAM3 W1TH Z0MB1ES!!1 represents a culmination of years of intensive psychological research, bleeding edge engineering, and artistic collaboration by over two dozen internationally recognized art houses that may or may not exist, using such technologies as the HYPERMAGIC 3.0 engine to power never-before-seen eye candy and the MEGACORE X parallelization processor for smooth-as-glass presentation.

“You can make a game,” said Ska Studios Lead Engineer Gato Maria Hernando Rodriguez-Rodriguez in an exclusive interview with Chairman Meow Magazine, “but what happens when you put zombies in it?  Nobody knows, but they’ll find out soon.  We’ll all find out soon.”  And, with Xbox Live Indie Games interest flagging under reports of poor sales, difficulty locating the section in the Dashboard while inebriated, and super-smart people saying super-smart things on web forums, the game couldn’t be released at a better time.

“We were following trends and noticed that most people were buying Xbox360s for the DVD player, the Xbox Live Vision Camera, and the Calculator app on XBLIG, but not for games,” Gato continues, “I MAED A GAM3 W1TH Z0MBIES!!1 will change that.  You’ll be playing our game.  It has zombies in it.  Ok bye.”