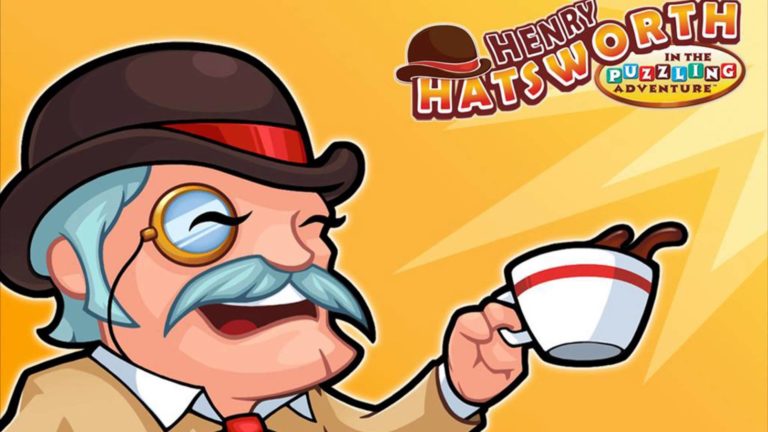 Prepare yourself a spot of tea, and get ready to partake in a smashingly great adventure on the Nintendo DS.

One day while doing his normal adventuring, Henry Hatsworth finds a golden bowler hat,  which unlocks access to the Puzzle Realm. It turns out the bowler is only one piece of many, which when worn complete the Gentleman’s Suit, giving the wearer the ability to traverse and control the Puzzle Realm. But when Hatsworth found the bowler, the Puzzle Realm began to leak into the real world, and now Hatsworth fights to collect all the pieces of the suit, collect scads of treasure, and become the next Gentleman.

Every great adventurer needs a nemesis, and Hatsworth definitely has one in Leopold Weasleby the Third. Weasleby is number 2 to Hatsworth in the Pompous Adventurers Club, and seeks to claim the number 1 spot by also entering the Puzzle Realm in search of the Gentleman’s Suit. He sends henchmen such as the womanizer Lance Banson (among others) to impede Hatsworth’s progress.

Henry Hatsworth is essentially two games in one – a platform adventure experience on the top screen and a puzzle game on the bottom. Together they combine to make the Puzzling Adventure.

Using the top screen, you will guide Henry throughout the various worlds that pieces of the suit are rumored to be hidden in. Defeating enemies in the top screen will uncover jewels and gold used for upgrading your weapons, and finding items sends them down to the puzzle screen. Just like other platformer games, you will find crumbling walkways and moving platforms. Suit pieces like the Pantaloons will allow you to jump between and slide along walls.

When you have defeated an enemy on the top screen, it moves down to the Puzzle Screen. By lining up three blocks of  the same colour either vertically or horizontally, you will permanently remove the enemies (face blocks), regain health (heart blocks) and use other items you may have picked up. Example: the lightning bolt blasts away all the blocks of that colour on the bottom screen, and when you return to the top screen it will zap away any enemies that are on the screen.

The Puzzle Screen contains two meters. The first meter controls how much time you can spend on the Puzzle screen itself. Once the timer runs out you are sent back into the main world. The second is your Super Meter, which increases when you make the blocks of three combinations. A full meter will rejuvenate Hasworth, while a double full meter will active Tea Time, bringing out Henry’s Robot Suit, a powerful suit I like to activate during boss battles as much as possible.

Switching between the two screens does take a little time to get used to in the beginning, but once you are, it is a lot of fun to keep flipping between the screens. My only issue with Hatsworth’s gameplay was that you didn’t get to really use the stylus too much. The one time I use it is when I am in the Puzzle screen, but even then you don’t have to use it. Most of the game is controlled by the digital pad and your action buttons.

My second, and last, issue with Hatsworth was the lack of true voice audio. There is “voice” to the characters during certain scenes, however it is all just random noises, almost like broken Simolean. The music in the game is good but there is no way it takes up so much space that real voice over work could not have been provided. Especially when we’ve seen that the DS can handle it, as was proven with Professor Layton.

EA does provide some great bonuses though. You can download the complete game soundtrack for free from the official Henry Hatsworth website. They also have delightful video promos for the game, one of which you can see here:

This is definitely a must buy game, and is perfect for people of all ages. Even younger children will be able to pick up and play with little assistance required.