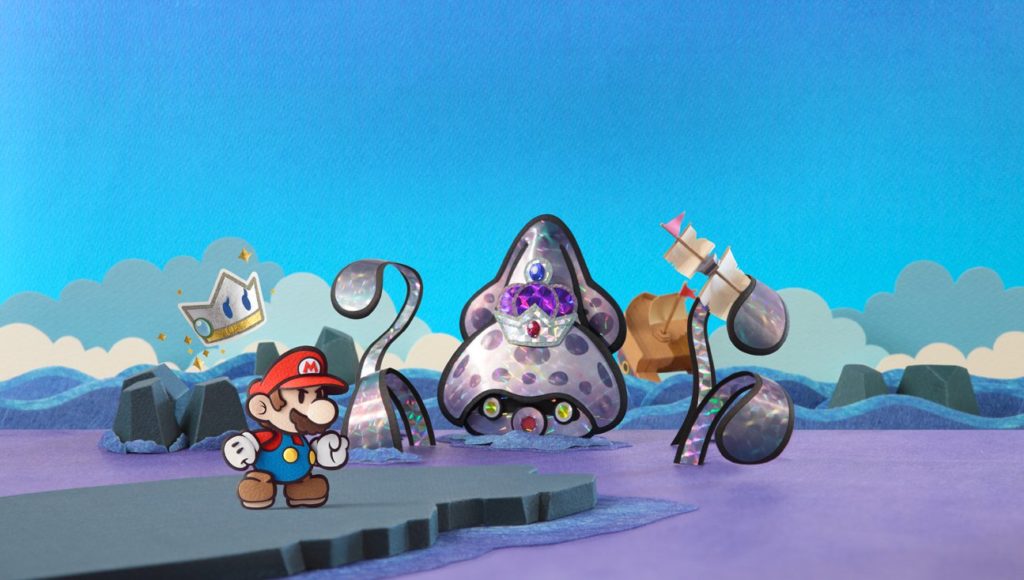 When I finally got my 3DS XL (Valentine’s Day gift from my husband this year) I knew there was no way in hell I was not going to get Paper Mario: Sticker Star. I had a love affair with the first two games, skipped the Wii version because, well, it’s the Wii and ours kind of just collects dust. But then I saw Best Buy had a one day sale on the game, dropping it down to $20. It was like the gaming gods smacked me in the face and I was OK with that.

Sticker Star was mostly what I expected it to be: the familiar Mario RPG formula I had grown to love. In typical Bowser fashion, the Sticker Festival goes horribly wrong, Princess Peach does that thing she does where she gets kidnapped, and the powerful Royal Stickers, sparkly crowns with immense powers, manage to fall into the hands of Bowser and some of his minions. However, this time around if I wanted to survive my encounters with goombas, bob-ombs, and Bowser’s other minions I’d need to rely on whatever stickers I could peel off the walls and trees or purchased from various stores around the map. These were mostly used in battles, but sometimes stickers were helpful in solving puzzles, even if just to unlock a ? Box for a few coins. All kept safe and sound (mostly) in a fancy schmancy sticker book provided by Kersti, my sticker companion.

Sticker breakdown: first, you’ve got your basic battle stickers, stuff like boots for stomping, hammers for whacking, red mushrooms for healing, with shiny ones being stronger versions of the basics and variations that allow you to jump on a spiky monster without jabbing your foot. Then you’ve got special Thing Stickers, like fans and refrigerators that can be used in battle to cause major cold damage or on a world map to really cool something down. Those stickers range in size and take up a lot of space in your sticker book, so while it’s always great to have them at the ready, too many of them in your book means less room for the smaller but still important ones you’ll need. Stickers are a one time use, so once they’ve been used you’ll want to collect and buy replacements.

Another type of sticker you can buy are Door Stickers. These can only be found at one shop and, once placed in the appropriate spaces, open up hidden areas where you can find more Thing Stickers, loads of coins, or secret passages. I think I still have one or two of these left to find because my Sticker Museum in Decalburg is not at 100% unlocked.

This is just one of those fun, upbeat games that doesn’t require a ton of previous knowledge or drown you with story; it’s the basic rules of pretty much everything Super Mario with turn based battles tossed in to offer that RPG element, a refreshing change from the regular run through to the end of the level deal. Sometimes fun, lighthearted games are the best thing in the world, especially when you’ve just invested 40+ hours into something super heavy with story and emotion.