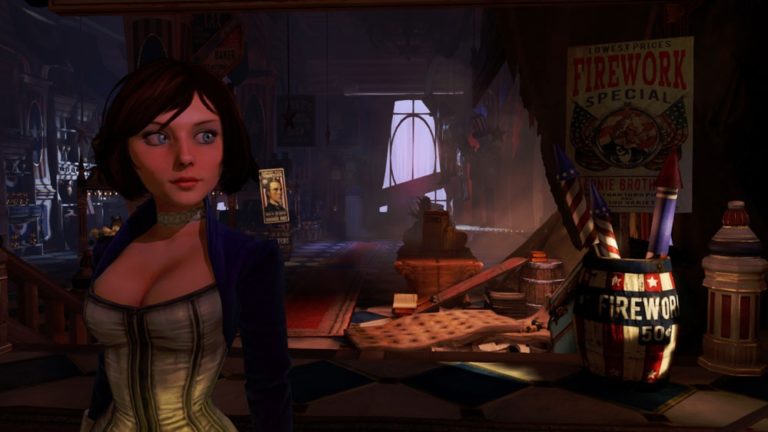 Seriously, there are going to be spoilers in this post. Do not read this if you haven’t finished the game!!

As an aspiring writer, I wish that I had the chance to shadow him during his creative process if only for a couple of weeks, because both games I have played of his have kept me on the edge of my seat and putting the final pieces together for days afterwards. His plot twists, his characters, his stunning locales….. If he taught a master class, I’d sell my kidneys to attend. But he does not, so I instead shall fangirl out about Bioshock Infinite in the space provided below.

Some people say Bioshock Infinite is too flawed to be called Game of the Year; the combat hasn’t changed too much from the first game, Vigors are pretty much the same thing as Plasmids, they wish the splicers were back, etc. It is those people who I think want Infinite as an FPS to be like all other FPS games; they want another Call of Duty clone because we live in a gaming world now where Call of Duty fanatics think that is the only way an FPS should be. As someone who is not a hardcore FPS gamer and is selective in the ones I do play, this is not what I want. What I wanted was exactly what Irrational gave me – a compelling story, full of twists and turns that made me think long after I watched the post-credits scene and aided in its telling by a basic enough combat system that did not get in the way.

Booker DeWitt’s journey to the city in the sky to rescue Elizabeth is no walk in the park. This floating city is under the control of Father Comstock, a prophet who preaches racial purity and the superiority of the white man, bringing Irish and African Americans to work the dirty jobs. Comstock has warned his flock that a man will come to take his daughter from him, and soon after Booker arrives he discovers that he is that man, the False Shepard.

Along the way we discover Elizabeth’s ability to create tears in the fabric of the universe. These tears show us glimpses of other places, including alternate versions of Columbia. At first, Booker gets Elizabeth to open these tears to bring in items from Other Columbia to aid in battle: mounted hooks, ammunition piles, health kits, motorized Patriots or mosquitoes for air support. But as the story progresses, Elizabeth and Booker must cross into the tears themselves if they hope to make it out of the city, and mucking about with alternate dimensions is never really a good thing for anyone.

Now, I was never into physics in school. When the choice came to Bio, Physics or Chem 10/20/30, I went with Biology; less of a headache for me. But listening to the voxophone recordings of the Lutece “twins” and watching them interact with Booker or one another over the course of the story intrigued me. Here they were, two versions of the same person from different dimensions who found each other by mucking about with physics and loved one another like siblings so much that they found a way to be together in every dimension. Granted that love ended up leading to Comstock getting a hold of Elizabeth, stealing her from her rightful place in the multiverse and giving her the ability to create the aforementioned tears, but still.

About two hours before I got to the scene with Comstock and the Luteces with the baby in the alley I’d put it together that Elizabeth was Booker’s daughter. After all, I had been paying attention to all the voxophones I’d been hunting down. How Comstock’s proximity and continued use of the Luteces’ machine had rendered him sterile, Lady Comstock’s suspicions about the baby she supposedly gave birth to being alive, Booker’s refusal to tell Elizabeth who the Anna was that he was muttering about on the beach.

But they did get me when Elizabeth took Booker to the baptism scene in the river. That scene still has me thinking about choices and how each branch off of each choice Booker made/makes as Booker or Comstock created that vast sea of lighthouses. And somewhere out there each of us has our own sea of lighthouses representing our choices and their ripples upon ripples.

And the fact that weeks after I finished the game for the first time this still sticks with me I consider a major win for Irrational.

Because no matter how much fun I had laying vigor traps, combo-ing attack moves, taking on waves of hostiles, or trying to tiptoe past those pesky Boys of Silence, at the end of the day, I want a story that puts a smile on my face long after I’ve watched the credits.

(Also, the music in Bioshock Infinite is awesome! Old-timey versions of stuff like Tainted Love!?!?! I catch myself singing it in my head a lot lately.)