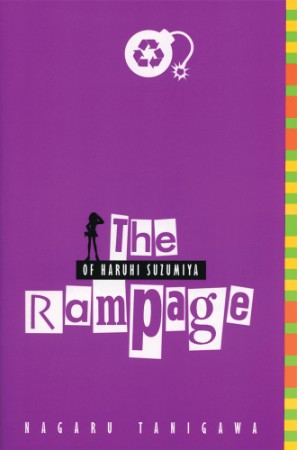 In this fifth installment in the Haruhi Suzumiya light novel series, Kyon narrates a few important events that took place during his first year with the members of the SOS Brigade.

Fans of the anime will recognize the first story in this collection as it comprised the majority of the second broadcast season. In Endless Eight, Kyon notices that he’s having a lot of deja vu moments in the last two weeks of summer vacation. Somewhere between running all over the place to cram in all of the summer activities Haruhi wants the Brigade to experience, Kyon learns the disturbing truth from Nagato, Koizumi, and Asahina.

In Day of the Sagittarius the computer club comes knocking on the clubroom door with a challenge for Haruhi and the group: to take them on in a computer game with the winner claiming possession of the desktop computer Haruhi blackmailed out of the president.  The stakes become larger when Haruhi demands new laptops for the Brigade should they come out victorious. Just what are the nerds next door after anyway?

The book wraps up with another vacation mystery when the SOS Brigade heads to the ski slopes in Snowy Mountain Syndrome. When Tsuruya offers her family’s winter resort home over the Christmas break, the Brigade (with Tsuruya and Kyon’s sister in tow) head off for some fun in the snow. Things go awry when a sudden blizzard kicks up and the group takes shelter in an abandoned mansion.

As always, I found myself putting aside important things just to spend time with Kyon, Haruhi and the antics of the SOS Brigade. I’m looking forward to doing so again when the sixth book comes out this winter.