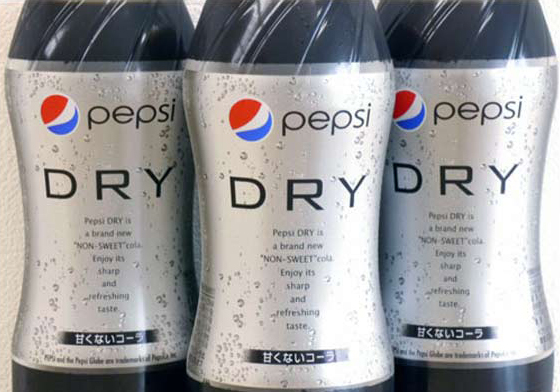 Pepsi: my favourite addiction. So delicious my taste buds tingle just at the thought of drinking the stuff. Regular, Wild Cherry, Crystal or Throwback, I love my Pepsi.

While making my bi-weekly rounds on J-List, I saw a listing for Pepsi Dry. A “non-sweet” cola drink promising a refreshing taste.  I didn’t want to miss out on this new flavour as I had the Mont Blanc Pepsi they’d released about a year ago in Japan, so I made sure that I had a bottle of it on my shopping list. After making sure the contoured plastic bottle was well chilled (left it overnight in the fridge), it was time to twist open the lid. It smelled just like regular Pepsi. It looked the same, too. The time for tasting had arrived.

You know that first split-second when you try something new for the first time? You’re just a bit hesitant, ready to spit it out? Yes, I had that split-second, followed by a few steady seconds of realizing that it wasn’t anywhere as horrible as I was expecting a non-sweet drink to be. The family Pepsi taste I have loved all these years was still there, just minus the sugar. And I would much rather have no sugar than fake sugar any day of the week. Pepsi Dry really does have a smooth flavour, no bitterness whatsoever. Immediately I started thinking of how Pepsi Dry could be used in alcoholic drinks in place of regular colas and wished I had ordered more to experiment with.

An added benefit of a non-sweet cola was the reduced amount of calories per serving. Ignorant people assume that only overweight people need to watch their calories and sugar intake, but diabetics and people who need to follow strict diets for all sorts of reasons are concerned with just how much they consume in a day. According to the bottle, there are about 21kcals per 100ml of Pepsi Dry, and with the bottle coming in at 490ml, that’s under 100 calories per bottle. Compare that against your average bottle of Pepsi, which usually comes in around 250 calories for an entire bottle. That is a tremendous difference for people who need to keep a close eye on their daily food intake.

Pepsi Dry is definitely a product I would love to have easier access to, but at $2.80 per bottle plus shipping fees from Japan, it’s a bit pricy. Here’s hoping they experiment with it here in North America soon. But if you are a Pepsi fan, it is worth a one-time tasting, for sure.

You can buy Pepsi Dry and other specialty Japanese drinks from J-List.