As a Canadian in the US of A, I am blessed with celebrating Thanksgiving twice a year. Which means that on the second Monday of October and the third Thursday in November, the background noise to whatever I’m cooking is every episode of Bob’s Burgers. It’s a show I ingest daily. If I want to laugh, Bob’s. Need the TV on for a bit before I go to sleep, Bob’s. Below is my personal ranking of every turkey themed episode as of Season 12.

The first Thanksgiving themed episode debuted in Season 3 and fans learned just how much Bob loves the holiday. The Belchers’ holiday moves from their tiny apartment to Fischoeder’s mansion when the landlord offers free rent in exchange for pretending to be his family. Stuck in the kitchen with turkey Lance, a bottle of Absinthe, and trying to keep the Belcher family traditions happening, our burger boss experiences a Ghibli-inspired fever dream and nearly takes a bullet.

After years on the wait list, Bob gets a Riverbrook Lake Farms heritage turkey. This cage free bird (named Popcorn because it ate popcorn that one time) is the crème de la crème of turkeys. He’s got big plans for this one, sadly thwarted by a gas outage in the neighbourhood. And Teddy is out of town so he can’t even borrow his best customer’s oven! Desperate, Bob rigs up a spit in the alley in an attempt to cook his bird but the fire department isn’t on board. This episode explores the most extreme reaction a Thanksgiving addict could have and I just love it.

Poor Gene. Sick on Thanksgiving, one of the best days for eating all year. While Bob’s making dinner and trying out new recipes, Lil Bob is stuck in the lone upstairs bathroom hoping to pass the sip test. He enlists his sisters to tell him stories that will make him hate food which include spoofs of classic movies Predator and Air Force One. While Breadator and Pear Force One were great stories, it was Parmageddon that really got me. He discovers that Gene ate some very old chicken parm the night before and uses his story to further their father/son bond and shared love of food.

Tina’s latest work of freaky friend fiction is turned into Wagstaff’s Thanksgiving school play, but only because Louise has a plan. Mr. Frond has gone too far! The second half of school day before the long weekend is supposed to be a half day. The goal is to make the play so bad that it gets cancelled and the kids can reclaim that precious afternoon. How Louise convinces all of the butchers in town to give her the offal no questions asked is just hilarious to me. Ultimately, I love how Tina turns the gross out around and makes the play a real success in the end.

All Bob wanted to do was test out is Father of the Brine. Yet somehow, every single turkey he preps for the day mysteriously ends up in a toilet. I absolutely love every time Bob goes to the butcher counter for a new bird. The increasingly uncomfortable conversation between Bob and the butcher makes me smile every time. When the culprit is discovered, all I can do is say “God damn it, Gayle.” Somehow, even indirectly, Gayle ruins everything. That said, the Thanksgiving song in this episode “Sailors in Your Mouth” is super catchy.

This year, Linda and the kids have decided they want to take part in the turkey run at Wonder Wharf. Bob takes this as the ultimate insult and refuses to make the traditional meal. He stays home alone, singing to Donna Summer. At the wharf, all hell breaks loose and the time for turkey revenge has come. People trapped on rides as murder birds chase them down, the Fischoeder brothers doing what they do best. Linda saves the day when she takes Teddy’s advice, and with Rudy in tow, they all make it home in time for Bob to whip something up. 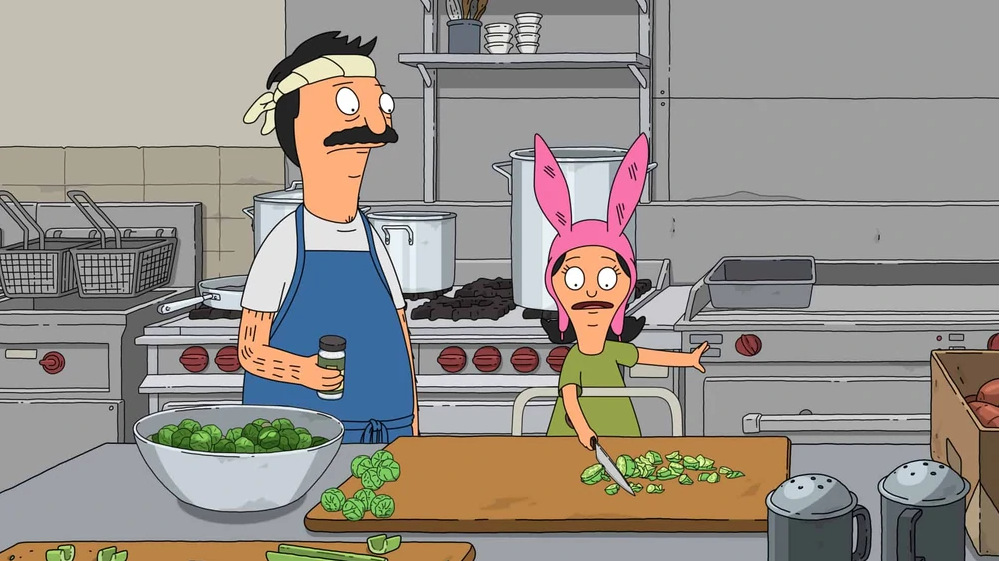 Thanksgiving is about giving back, which is why the Belchers head to the Elegant Doily this year. The plan was to socialize with the elderly and bring a little cheer, but the couple who run the kitchen are at the hospital and Bob steps up to handle a simple meal for the residents. None of the kids want to help out; Bob notoriously is a bit of a chefzilla this time of year. Louise ends up assigned as his sous chef and does her absolute worst in the hopes her dad kicks her out.

While I do love how the Belchers steal a turkey that was publicly pardoned yet still expected at a slaughterhouse, it just doesn’t rank higher up my list right now. Droop E Neck deserved to find a happy home and the fact that he eventually gets one after the reckless driving and wolves is amazing. The real victory here is that Bob does manage to get his hands on some fresh cranberries thanks to our favourite farmer, the owner of my beloved Double Butt.

Teddy, sometimes I just don’t know how you are even alive. In Thanks-hoarding, Teddy freaks out when his family plans on visiting his place for the big holiday. Teddy calls in Bob to help him handle the turkey and all its fixings. The entire meal prep lands on Bob since Teddy doesn’t even know how to use a peeler. Meanwhile, Lin and the kids stumble on Teddy’s horrible secret: he’s a hoarder! Don’t get me wrong, Teddy’s a great guy. A little creepy at times and definitely invades the Belchers’ personal space a lot, but generally means well. The real winner in this episode was Bob since he had a chance at a second T-Day meal complete with a spatchcocked turkey missing from the family meal.

Ugh, Gayle. Why is she almost always the very worst? (There’s about two episodes in which I actually don’t mind her.) Faking an injury and inclement weather forces Bob to pick up his sister-in-law and bring her back for Thanksgiving dinner. But the car gets snowed in and Gayle insists on bringing Mr. Business, ultimately leaving Linda and the kids responsible for prepping the big meal.