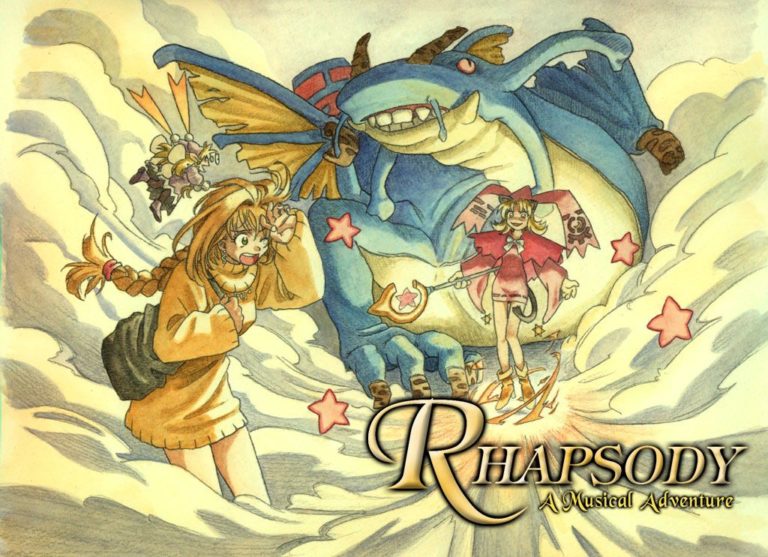 Our heroine, young Cornet of the village of Orange, is quite the shy girl. Her mother passed away when she was young, she lives with her grandfather, and has the ability to interact with Puppets. She loves playing on the horn that her mother taught her to play, and has a best “nemesis” in her childhood friend, Etoile.

Cornet has never met Prince Ferdinand, but every night she dreams about him rescuing her, being the love of her life. While enjoying her daily excursion into the woods with her magical puppet Kururu, the two of them are attacked but Prince Ferdinand is there and saves her. So when the prince is kidnapped by a witch named Marjoly, and accidentally turned to stone when the witch’s spell takes a bad turn, Cornet (armed with her magical wish-granting horn) and Kururu set off to save the prince and return him to normal.

The DS version of Rhapsody features a 2-D turn based battle style, and plays just like any other dungeon-crawler JRPG. You are free to wander into all the buildings in each of the towns, interact with the NPCs and search for hidden items and money in your neighbours’ trash cans. Once you enter one of the dungeons, you can explore for hidden treasures and even stumble upon new Puppets for Cornet to add to the party. Some of these puppets will require your party to be at a certain level in order to join; others you will need to defeat in battle. But no matter how you find them, you must play your horn in order to fulfill the recruitment.

Like most RPGs, battles have three basic options: Attack, Magic/Special Abilities/Items. Each round of battle begins with you selecting each party member’s move, with no knowledge as to when the enemy will make their move. Puppets have elemental alignments which give them various related magic spells, some of which will only damage one enemy and others which will attack the enemy party as a whole.

The special music note bar at the top of the battle screen is the Kansha Gauge. When Cornet plays her horn in support of her party, each active puppet in the battle will give her a support note. As Cornet keeps supporting and gaining these notes, she gets to pull off some very special attack moves: Sugar Candy, Flan, Cake and Pancake attacks. When the bar is maxed out at 5, she can use Heart, which will fully heal and restore all ability points to the team.

2-D dungeon crawlers usually look pretty decent on the DS. Rhapsody is no exception. The sprites have limited animation, and there really aren’t any CGI scenes to speak of. The few cut-scenes that exist consist mostly of singing, which was kept in Japanese but subtitled for the US release. There is one melody that runs through what Cornet plays on her horn and what the characters use for their singing highlights. I am glad that when dialogue comes up, the characters close-ups don’t look like the “chibi” form you actually control on the screen.

I don’t know how much replay value I will get out of the game. I managed to collect most of the puppets on this playthrough, and there wasn’t much that I could find in the way of sidequests. My playthrough was just around the 20 hour mark, and I think the only other thing I could have done to extend the gameplay was to keep levelling up in the various dungeons. It was a pretty enjoyable one time game, however.

Rhapsody features a lot of strong female characters; Cornet, Kururu, Etoile. These women embody different aspects of female nature: insecurity and discovery, nurturing and encouragement. But where the game fails is in how they approach certain issues females (especially young females) face. I did not play the original PSOne version, nor the Japanese releases, but some of the things said in the game simply do not lend themselves to a game that is E rated. They make poor references to weight (calling Cornet “chubby” at a mere 100 pounds), comments about showing leg to the prince (would you tell your 8 year old playing this game that this is acceptable behaviour), and even comments about the witch, Marjoly, not wearing underwear. Now, as an adult I can see some humour in some of the text, but if this game is rated as E for Everyone, then I wonder how the ESRB let dialogue like that go lower than a Teen rating. If these were actual dialogue translations from the Japanese release, then the localization team should have changed them. And if not, and this was the work of the localization team, then they should have been told to change the text or accept a higher ESRB rating.

Other than my disappointment that this game somehow passed with an E rating, I would definitely say if you are looking for a fun, quick JRPG that you should give this a try. It really doesn’t use the stylus, so don’t worry if you’ve lost yours. I was able to find it for $15 new/$10 used, which I think is a good deal for a game that can be finished in under 20 hours. A nice, cheap but fun addition to the fan of the genre.