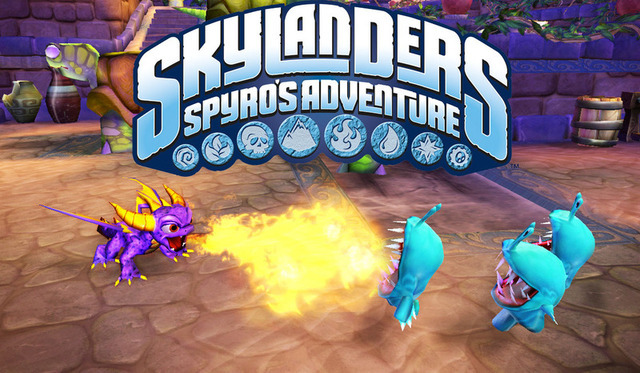 Skylanders had flown under my radar for a long time, mostly because I have a major prejudice against Activision these days (although not as bad as my hatred of Lionhead) but also due to my increasing dislike of gimmicky games. I’d also been extremely pumped for Skyrim, which had been my big Holiday 2011 game and consumed my life for a month straight.

After coming out of my Skyrim haze and seeing a bunch of our friends talking about how much they were enjoying Skylanders, we decided to take the plunge and picked up the starter kit, and adventure pack and a couple additional characters. Over his Christmas break, my husband and I drove all over looking for the now impossible to find toys and I watched him play at night until we managed to find a few toys I could register to myself.

Once I had Hex (Undead), Whirlwind (Air) and FlameSlinger (Fire) in hand, I was ready to venture into the Skylands.

Skylanders: Spyro’s Adventure takes place in the magical world of the Skylands. A short, evil maniac named Kaos has designs to bring his Darkness to Skylands but you appear as a Portal Master with the power to summon magically gifted heroes called Skylanders as defenders of the land. As the Portal Master, you will guide Spyro and his Skylander friends through various levels, battle enemies and collect the components needed to rebuild the gate Kaos destroyed and keep the lands safe from his evil.

There are 22 levels in the main game (this excludes the bonus Adventure Pack levels: Darklight Crypt, Pirate Seas and Empire of Ice) for you to explore, filled with treasure chests, hats and Soul Gems to unlock a unique ability for individual Skylanders. For instance, the Soul Gem I needed for Hex’ final ability was hidden inside Darklight Crypt, making me extra glad that that was the one adventure pack we did indeed have.

The use of Spyro’s name in the title of the game is a tad misleading; yes, Spyro is one of the characters you can control in the game, but the game is not specifically about Spyro. There are a total of 32 Skylanders for the player to potentially collect, divided into eight elemental-based classes. Each character has his or her own unique attacks with new ones available for purchase as you progress and gather oodles of coins. They also have added bonuses in power in certain sections of a level and can open special gates to areas containing Legendary Treasures – hats that grant various stat upgrades when equipped.

Skylanders features a proprietary peripheral called the Portal of Power that when combined with RFID technology bring your figures to life inside the game, storing your characters stats, money and current accessory on the chip instead of your game save. This allows you to take your Skylander with you to a friend’s game as well as use them in the web companion game for more adventuring.

Instead of going the route of selling DLC in a digital form, Skylanders released Adventure Packs to keep the fun times going and can be played at any point of the game. To activate and store that level in your game save, simply pop the location piece on the Portal of Power and head to your new destination. Adventure Packs come with one Skylander as well as bonus item objects that can prove useful in any level of the game. Darklight Crypt came with a Healing Potion that can be used once per level until the timer runs out and heals the Skylander currently in use, as well as an Hourglass which helps slow down your enemies until it’s juice is out (also with a one full cycle per level stipulation).

The hardest part of Skylanders isn’t the game itself, but finding the figures not packaged with the starter packs. Since the holiday boom, figures have been slowly trickling into stores and selling out within hours of hitting the shelves. We’ve been making weekly runs to Toys R Us, Walmarts, Target and Best Buy looking for the toys to fill my husband’s collection (he currently needs 8 of the regular figures, and we have no Legendary or special edition figures at the moment) and I just would like to have one from each element in my personal arsenal. Here’s hoping the wave of figures rumoured to come March 21st last long enough for us to get our hands on the ones we need.

It’s been a while since I’ve played an adventure game as endearing, vibrant and fun as Skylanders. The fact that my husband and I can play cooperatively together on one person’s 360 and then switch to the other’s without that excitement dulling is a testament to that. Sure, there are some slight hiccups with glitches, but nothing that has broken either of our games to date (knock on wood here).

My experience with the web game has been decent enough, I suppose. The Portal likes to forget I’ve installed the drivers every time I hook it up and it does take longer than PixelJunk Monster Online (Facebook) to load most days, but it’s a cute little addition and helps bump up my Skylanders’ stats. Plus, I get to customize and expand my own lair, which isn’t part of the console version.