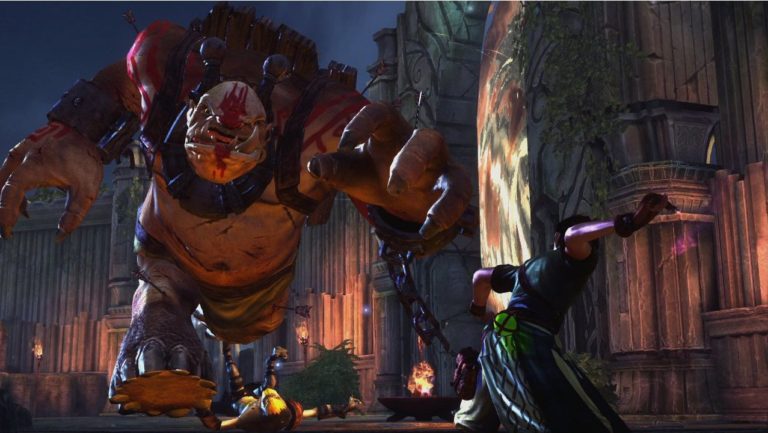 Status: Finished one run-through of Sorcery on Casual in 6 hours
Trophies: 21 of 34 unlocked

It’s not often a game running purely on motion controls comes along that I absolutely have to have. In fact, Sorcery was the very first one. Hell, I was so excited for a game that would utilize my Move controllers that I made sure we picked it up at midnight. While everyone else was in line to pick up their copies of Ghost Recon: Future Soldier, I was the one lone pre-order for the wand waving extravaganza.

Sorcery is the story of a young man named Finn, an orphan living with an elderly sorcerer and a talking cat named Erline. Like most teenagers, he hates doing chores and wants to experiment with things he shouldn’t. In this case, it’s magic. His guardian, Dash, often rebukes him for stealing his wands and doles out punishments like cleaning chamber pots. When Finn discovers a really cool wand locked away in Dash’s chamber while he’s away, his incessant zapping leads to the destruction of a potion for which ingredients would need to be found if he hopes to replace it.

While searching for the needed ingredient, things take a turn for the worse. Erline’s secret comes out, causing Finn and his furry companion to travel into the depths of her past if they hope to keep their world safe from impending Nightmare. Armed with his wand, Finn discovers that maybe he has more aptitude for the arcane than he was led to believe.

Armed with the Move controller, you will be flicking and flinging spells to get past barriers and take down all sorts of enemies. You’ll start off with your basic Arcane Bolt and a Ground spell, picking up new Spell Nexuses granting additional powers as you progress. The obvious fire kills ice/ice harms fire logic applies here, so make sure you are ready to switch spells quickly as the situation demands. You can also cast spell traps along the ground and combine spells to deal more damage. In fact, you’ll have to use multiple spells in order to take down some of the larger foes as you hit later levels in the game.

Switching spells is fairly easy (in theory): Arcane Bolt is your default spell but if you want to switch to another, simply hold down the Move button and perform the required motion to select. Simply tap the Move button again to return to Arcane Bolt. For the first few spells, things were all good. But once I had the last two in my arsenal, switching became a bit of a problem. One of them calls for making an upright circular motion, the other a straight side to side with the wand pointed at the TV. For some reason the game kept misreading my motions once both of these were available to me and not before.

While the Move wand takes care of your offense, the Nav controller handles your movement and basic defenses. You’ll use it to direct Finn along the very linear path set ahead of him, bring up his shield during battle, and refocus the camera angle should you require it. Finn’s shield can also be used outside of battle to smash in cracked walls hiding paths to secret goodies or just opening up the way. The same shield bash is also important during combat; using it against enemies carrying shields of their own will cause them to break away, opening them up to attacks. Try hitting a defenseless target with three ice strikes, freezing them in a solid block of ice, then shield bash them. Probably the best tip I can give you for getting through some of the tighter fights.

Unfortunately, the auto-locking camera during fight sequences can be a huge pain. With the camera locked, it makes it difficult to scan around you to search for healing potions, so if you feel like a major battle is about to take place, pause before approaching and take a quick glance around the perimeter. Most often they are located around the edge of the arena, but since you can’t swirl the camera around to look mid-fight, you may miss them if they happen to be hidden. Unless you are going to for the trophy which requires you to make it through the game without ever using a health potion, in which I bid you good luck.

One of my favourite parts of the game was mixing together ingredients to create all sorts of potions. Ingredients are found in chests or you can purchase what you need from the traveling alchemist, just make sure you have some empty potion bottles on hand. You can research combinations to your hearts content, but without those bottles you won’t be able to mix anything to drink. When you are ready to create a potion, you’ll be taken to a cauldron where the ingredients are ground, shaken or poured into the boiling pot, then stirred with the wand. Once the potion has been made, you are kicked back to the game screen where you will shake the Move wand as you would a bottled drink, then tilt it to “drink”. The ball on the Move controller glows to match your potion: red for health, blue for mana, et cetera.

Other than issues with casting those two spells and the in-battle camera, I am pleased to say that I didn’t really run into many glitches with Sorcery. There was one instance there I was moving into a new area and got stuck for a minute or two in a seam. Aside from that, I had a very smooth run my first time through Sorcery and I know I am going to play it again. Here’s hoping I’m just as lucky the second time through.

I had a lot of fun with Sorcery – and got a real workout on my right arm those first couple of 90 minute play sessions. Even though I had some frustration with aiming and casting combination spells early on, once I found my rhythm things flowed much more smoothly. The storybook style cutscenes that start off each chapter of the game were beautiful and fully voiced over, with exception of the final scene. Now, I’m not sure if that was a glitch in my game or if for some reason they forgot the audio when they printed the discs.

Sorcery is by far the spotlight Move software, an original PS3 exclusive that you couldn’t do with Kinect and just wouldn’t be as cool on the Wii. There is just something extra special about the way the wand glows to match Finn’s.