Otome games get the short end of the stick. It’s a format under-appreciated by the majority of gamers outside of Japan because they are more of an interactive choose your own adventure than a game in the traditional sense. But I like weird and non-traditional games so Sweet Fuse: At Your Side had to be part of my PSP library, one of the last PSP games to get the UMD treatment.

Sweet Fuse centers around a video game theme park created by a fictionalization of game designer Keiji Inafune that has been taken over by the nefarious Count Hogstein during a pre-launch event. Seven unlucky attendees are roped into taking part in Hogstein’s twisted game, including Inafune’s niece, your playable character. If you and the group can successfully make it through seven days and seven trap-laden park areas, Hogstein claims he will let the hostages go.

Her six companions come from all sorts of backgrounds: police detective, journalist, gamer, fortune teller, boy band member, and club host (poorly translated as an escort). As the game progresses, you uncover bits of these men’s identities that explains why each was chosen by Hogstein as unwilling participants in the game. There is another man locked away somewhere in a closet that I did not find in my original run which I hope to locate this time.

For my first time through I nearly unlocked the extra video with Urabe the fortune teller. I think I was one or two decisions short of winning all of his affection on that one. This time through I’m working on Meoshi, the shy gamer kid who came to the pre-launch event for some exclusive DLC. I’ve just watched him move with ninja-like agility again as I work on this playthrough and will awkwardly share a drink with him on the theme park’s floating hotel (a yacht) after we make it through the first day here. After that I’ll have to see what choices I made last time and alter them so I can see what sort of outcome is possible.

Using the Auto function helps speed the dialogue at a nice pace and is easier on my PSP than mashing the X button over and over like I did the first time through. It’s also helping move along the earlier section of the game before the big event that happened to me during Stage 4 my first go around. I’ve used the in-game screenshot option a few times and will get around to viewing them on the stick or posting them at the bottom of my post at some point so long as they aren’t full of spoilers. Being able to snap screens either with or without the game text is a nice perk and not an option I can recall being in Hakuoki on PSP. I’ll have to go back and check that out at some point.

Two of my favourite parts in the game deal with Saki Inafune directly. The first is her Explosive Incite which comes around at least once per Stage when the group is trying to solve the puzzles in their way. During Explosive Incite, Saki reviews the events and clues given to them with certain key phrases highlighted. The player selects three of these and if one of those is correct, Saki’s incite bomb goes off giving them the answer needed to continue. If she fails, bad things tend to happen. 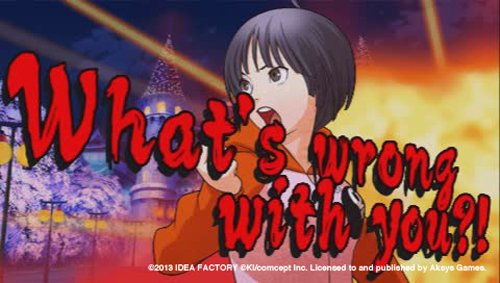 Saki’s also got quite the temper. Hogstein’s attitude towards the hostages and attempts to twist his own rules when the group finds exploits often leads to Saki’s screens turning red until you decide whether or not to rip him a new one. I like to just give it to him as I find the dialogue hilarious. And it’s not just Hogstein who faces the wrath of Saki; I’ve also witnessed her yelling at Urabe and other men in the group depending on the situation or relationship status.

With multiple endings offered due to the nature of otome games, there is so much replay here with new pieces of story to uncover. Depending on how quickly you read/button mash I’m guessing the average game time is about 10 hours or so but that is based off what I went through with Urabe. No matter to me, though, as I will experience a few more endings and finish unlocking the few gallery items I have yet to collect.