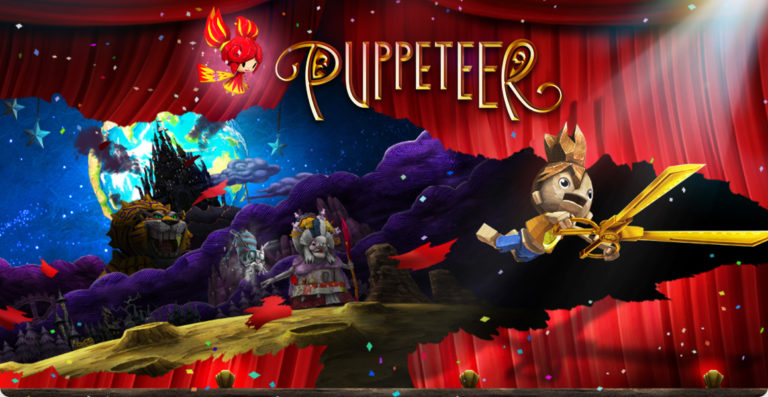 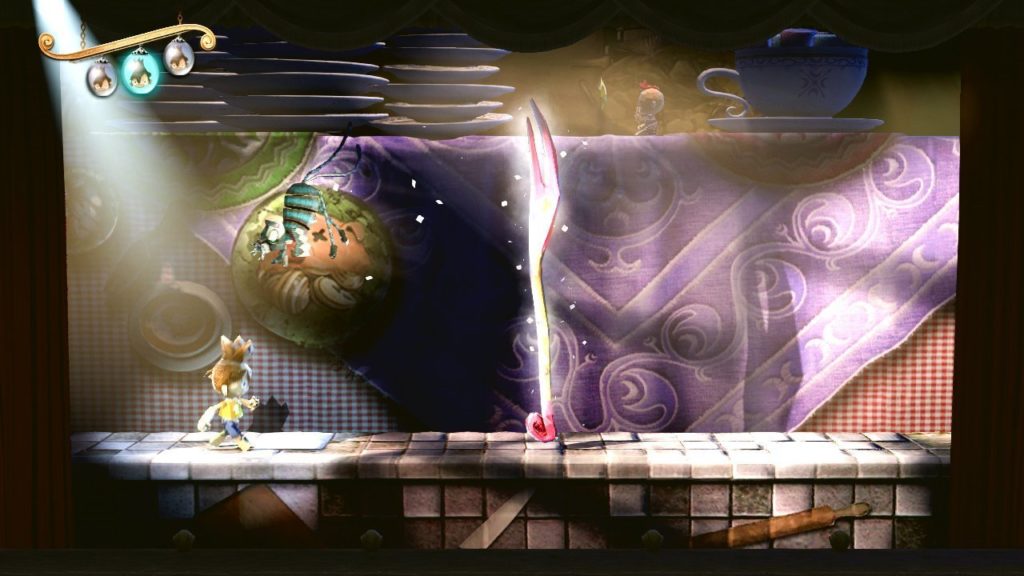 Status: Finished all 21 curtains
Playtime: About 15 hours or so
Heads Collected: 66 of 100

With the holiday season approaching and the usual slew of annual sequels nipping at our heels, new and innovative titles such as Puppeteer are a welcome sight to this long-time gamer’s eyes. I knew from the first moment I caught wind of this fanciful Kabuki-style platformer from JapanStudio that it would become part of my Playstation library, something I will never regret and most likely chastise anyone who doesn’t add it to their own.

In this vibrant and charming chunk of software, you play as Kutaro, a young boy who’s been turned into a wooden puppet and caught up in a galactic struggle. The evil Moon Bear King has conquered the White Moon Castle and is capturing the souls of children, turning them into unwilling servants better known as grubs. The Moon Bear King has seized the Black Moon Stone for himself, destroyed the White Moon Stone, shattering it into shards and entrusting those shiny bits to his Zodiac themed generals. Recruited by the Moon Witch, Ezma Potts, Kutaro sets out to steal a pair of powerful scissors known as Calibrus and put a stop to the Moon Bear King ‘s plans.

Like most platformers, Puppeteer spans multiple levels and embraces minor puzzle solving with battle elements and well-timed button mashing. Since you don’t have trusty Calibrus with you right away, you’ll spend most of your time jumping around to the section exits while investigating the room with Ying Yang or Pikarina. If you see something interesting in the background like a toy or an animal, having them investigate may uncover a new head for Kutaro and heads are very important. If not, you’re bound to find some moonsparkles; along the same lines as coins in Super Mario games, collecting 100 moonsparkles gives Kutaro another life, which is deducted from every time you run out of heads for the boy.

Heads. Very important as Kutaro loses his quite a bit. There are a total of 100 heads in the game, some easy to find and others well hidden. Kutaro can hold up to three heads at a time and are displayed in the upper left corner of the screen. Each of these has a unique action and if performed near a matching blinking notifier on the screen can trigger an event or open a Bonus Stage. My personal favourite is the Sushi head which turned all of the fugu hazards into bouncy sushi pads (and gave me a mad craving for sushi, something I always crave as it is but still, my tummy doesn’t need that grief). Investigate everything. I mean it. There are heads that fall from level bosses if you do the action in time, special heads from interacting with the background wildlife, etc. There are also cauldrons floating about in the sky for you should your inventory be low.

When you have three heads and find a new one, the newer head will replace whatever you are currently using and turn the old one into moonsparkles; however, if you had one or two, Kutaro will simply wear the new head. If Kutaro loses his head there is a short grace period where you can collect it again. If you miss that window, it will turn into moonsparkles. As noted previously, loses all the heads in your inventory and you’ll need to use a new life. When this happens, your companion character will drop a random head on Kutaro, so if you’ve been holding onto a favourite head, be extra careful.

Then there’s Calibrus. Not only are these special snippers great for reaching new heights or staying aloft, but they are important in removing the souls from their grub hosts. A couple good clips and the soul balloons will pop up, waiting to be released. If you take too long the balloons retract and you’ll have to make them reappear again. This is also true when dealing with Reaver bosses. I have yet to free all the souls from a Reaver boss in one go (it’s taken me at least two times) but I will get there.

You’ll also use Calibrus in Quick Time Events with the Generals once you’ve weakened them and are preparing to liberate their Moon Shards. If you make a wrong move during these Kutaro will die but you’ll restart from the beginning of the QTE and not have to replay the main battle over. You’ll only have a few seconds to hit the right button so keep your eyes on the screen. Most of these are pretty short and stick with the X and Square buttons until you reach later levels.

In addition to the fun heads you’ll find throughout the game, there are four special heads belonging to the former Moon Goddess’ champions. Locating each of these happens naturally as the story progresses, giving Kutaro new abilities: blocking, grappling, projectiles, and ground pounding.

Puppeteer supports the standard Dualshock 3 as well as the Playstation Move controllers, and allows for co-operative play. So far I have only tinkered with the regular controller and single player mode. Now that I have finished the story I plan to go back and try the earlier levels out with the Move wands as I’d like to see how Puppeteer compares to Sorcery, a game built on Move technology. I have a feeling that as Puppeteer’s story progresses, using the Move controllers to play would get very complicated. I’m also curious to see just how much a second player can do in-game; do they control another Kutaro or do they play as the companion character? Maybe I’ll charge up the second controller to see what the deal is with that. I know my husband wants to give the game a try so if we get it done before the Borderlands 2 Loot Hunt starts I call that a win.