After missing out on the first couple of these, I am glad to finally be able to join in the Gamer Banter blog swap initiated by Terry over at GameCouch.

This month’s topic of discussion is: What was the game that made you a gamer? 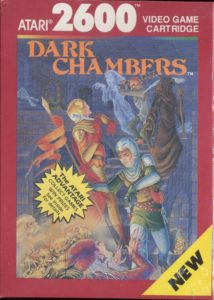 Way, way back in the early 80s, my mom came home one day with an Atari 2600 and two games: Galaga and Dark Chambers. I was familiar with Galaga from the nearby laundromat, having wasted quarters upon quarters there on the weekends. Blasting those little aliens was some good, wholesome fun.

While I enjoyed my time with Galaga and claimed the title of champion in my house, it was Dark Chambers that really interested me. There was something so new and wonderful to five or six year old me with exploring each dungeon, battling enemies and looking for coloured keys. Dark Chambers was my first adventure/RPG title, my first love. I spent countless hours with Dark Chambers, much to the disappointment of my younger brothers who wanted it to be their turn to play.

I don’t recall any real plot to the game, although I am sure there was one. It was so long ago I just don’t remember. What I do remember was that Dark Chambers kick-started my love affair with video games, particularly the adventure/roleplaying genre. 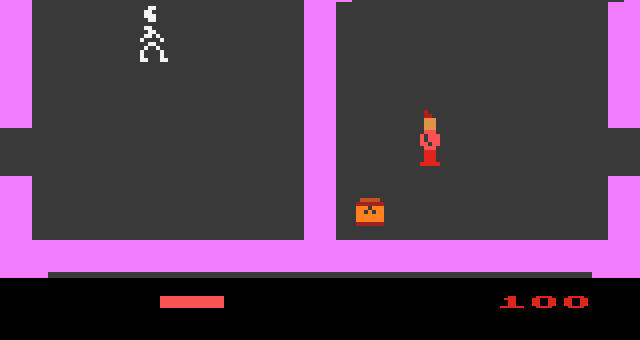 Just look at those graphics!

Sadly, our Atari didn’t last long. Only a couple years after we got it, it died. Since we my family didn’t have much in the way of disposable income, we never were able to replace that Atari. I’d sneak in some game time whenever I could when we visited cousins with NES and Genesis machines, but nothing filled the void. Slowly my love for gaming waned.

Flash forward more than a decade to 2000. Gaming made an unexpected resurgence in my life just prior to the launch of the Playstation 2. I had started in a relationship with a gamer just a month or so before the system launched. Since I’d been out of the loop for so long, there was so much I didn’t know about the latest in the industry. While I was introduced to several new games on the Dreamcast and Playstation 2, it was a title for the Playstation 1 that reignited my passion for gaming. 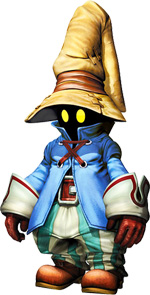 After so many years out of the gaming scene, there were an awful lot of games for me to see and discover. My love for fantasy novels and a copy of EGM steered me towards an upcoming roleplaying game featuring an adorable little Black Mage and a boy with a tale. Apparently this was the ninth game in a series, but to me it will forever remain my first true RPG.

At the time of its release, I was unemployed. And instead of looking for a job right away, I got up very morning and lost myself in Final Fantasy IX. Hours upon hours were spent exploring every continent, equipping every item and learning every skill. Even when a battle was too tough for the current level of my characters, I could not tear myself away from this amazing new world I had found myself in. The music was brilliant, the cast so human. To me, it was as though nothing existed outside of the game. The game was all I wanted to do or think about.

Within a couple weeks I’d completed the game, finishing the last leg of the game all in one go. It was the first time a video game made me cry. That’s something you always remember. The time I spent with Vivi, Zidane, Garnet and the rest of the cast was by far the best RPG experience I’ve had, even to this day. Final Fantasy IX opened me up to a new world of gaming, and for that I am eternally grateful.

(Final Fantasy IX is now available to purchase on the PlayStation Network (PSN) as a PSOne Classic title for $9.99. If digital content is not your thing, you can also find new copies of the Greatest Hits packaging in stores or on Amazon. Remember, most PSOne titles do play in the PlayStation 3.)

This post was part of Gamer Banter, a monthly video game discussion coordinated by Terry at Game Couch. If you’re interested in being part of this, please email him for details.

Aim for the Head: The Gamer I Am Today

carocat.co.uk: A Trip Down Memory Lane

The Average Gamer: What Made Me a Gamer

Gamer Unit: What was the game that made you a gamer?

Next Jen: What Made Me into a Gamer