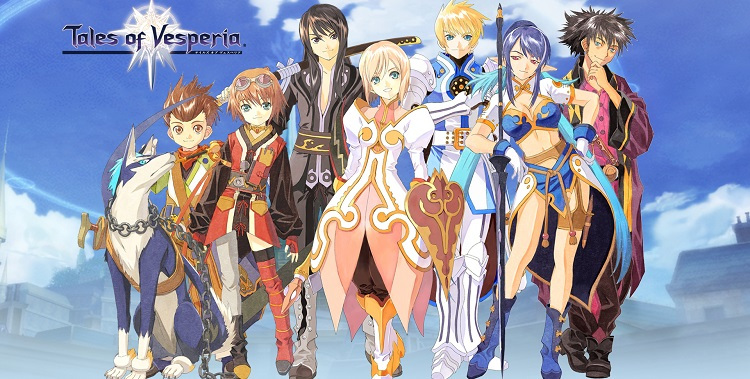 Status: 1 playthrough of Tales of Vesperia is nearly complete
Achievements: 13 of 50
Gamerscore: 205/1000
DLC Purchased: None

One of my favourite games on the Game Cube was Tales of Symphonia. I never played Tales of the Abyss or Legendia on the PS2. But when I found out that Namco Bandai was releasing a new title, Tales of Vesperia on the Xbox 360, I was excited and preordered it as soon as I could.

In the latest installment, we join Yuri, a former knight of the empire recently escaped from the castle jail, Lady Estellise (or Estelle) who has taken it upon herself to “run away” from the castle with Yuri, as they search for a thief who has made off with the Blastia core that was stolen from the poor people of the lower quarter of the capital of the empire.

The people of Terca Lumireis are dependent on the ancient technology of the blastia. These blastia protect their cities, provide them with sustenance, and ensure their well-being. Now someone is stealing and manipulating the blastia for their own evil purposes. Determined to help the people of Terca Lumiries, Yuri and his wolf-dog Repede, joined by Estelle, a young Hunter named Karol, and a mage from the blastia research centre in Aspio, Rita, battle their way across the land, searching for this thief called “Mordio” and the reason he is upsetting the balance of the land by stealing and modifying the blastia cores.

Anyone familiar with the Tales series knows of the cel shaded character designs that Namco is fond of. Vesperia does not disappoint. The costumes are vibrant and a lovely contrast to the pre-rendered backgrounds. As with most all Japanese RPGs, the anime style characters and monsters are beautiful and the animation flows smoothly during battles and while exploring the dungeons.

Control:
The battle system in Vesperia is a blend of 2-D and 3-D fighting. On the field and in dungeons, you can see the enemies on your screen and either attempt to confront them or avoid them. You can also engage more than one enemy at once when you can lure more than one to spot you at the same time. Within the battle screen, fights are on a 2-D plane. However, holding down the left trigger allows you to move freely within the battle sphere if you need to move away from the action in order to use items. If you are choosing to be the only person controlling a character during the battles, then you have a very intuitive strategy system you can use to set actions during battle of your teammates.

New skills are learned during the battle process by purchasing weapons with skills attached to them. After you have finished learning them, you can going into your skills screen and set the skills you would like to use until you have allocated all the SP (Skill Points) your character has available. Make sure you learn all the skills attached to the weapons before you upgrade to something a little more powerful, as there are certain skills which cannot be learned until previous ones have been.

Make sure that you are actively battling monsters. Power leveling is not necessary, but you do need to maintain a fairly high level in order to proceed. Not only that, you will notice that Gald (gold) is just as important as the materials you recover from battles. Just keep this in mind.

Sound:
Tales has a wonderfully delightful soundtrack behind it. Most of the tracks are very upbeat, and more subdued songs are used correctly in cut scenes and battles that require them. Voice acting, however, a different story. For the most part, the main characters in your group sound just fine. Some of the bosses and side characters’ voices tend to get on my nerves. Zagi, the very first boss you fight, has the worst voice acting of them all. I was very disappointed that Japanese voice overs were not optional in this game, as they have been in for both Blue Dragon and Lost Odyssey.

Tales of Vesperia has been released during the tenth anniversary of the Tales series. To celebrate, Namco Bandai released a Collector’s Edition of the game which has been packaged in a shiny Steelbook case along with a 10th Anniversary soundtrack. The soundtrack contains some of the most well-known audio tracks from each of the games. There is also a special code inside which grants the owner something a little extra from Namco Bandai.

Flow:
Story progression is very fluid in Vesperia. I haven’t come across any huge jumps in the story arc making me scratch my head in wonder. Instead, everything follows a logical, yet almost stereotypical fantasy/JRPG story. Some things are quite obvious to the player, while others come as a bit of a shock, but are not far-fetched.

Fun Factor:
Another important aspect of the game is Synthesizing. Bosses and monsters drop materials which are used to make upgrades to your weapons and armour, create special items, and even standard gels and potions that you will use regularly in battle. Keeping weapons once you are done learning the skills attached is beneficial, since you can turn those into raw materials and create new or +1 versions of them.

Returning once again to the Tales series is the Wonder Chef! Disguising himself as a turnip, rubber duck, giant fish, etc, the Wonder Chef is hiding in various locations all over the world, just waiting to teach you new recipes that will increase battle attacks, your HP and TP. As in the previous games, certain characters are better at cooking than others, and sometimes better at certain individual recipes than others. Play around, try getting the various party members to make each recipe until you find the ones who won’t kill you with their food!

Female Aspect:
Tales has 3 major female characters: Estellise (Estelle), Rita Mordio, and Judith. Each one has their own battle strength. Estelle fills the Healer role, Rita has power magic attacks, and Judith is deadly with her spear. All three females’ roles are important to the story line, as all the characters evolve from their interactions with each other.

Replay Value:
RPGs tend to be a one-time through style of game, unless you are a fan of the series you are playing, or if you love completing every side quest. Another deciding factor is the achievements. So far, I know there are quite a few I missed in earlier boss battles, and I really want all 1000 Gamerscore points from the game.

Anyone who is a fan of the Japanese RPG genre who enjoyed Lost Odyssey or Blue Dragon will fall in love with the gorgeous art and graphics of this game. I strongly recommend this title for anyone else who has felt the lack of JRPGs on the 360.