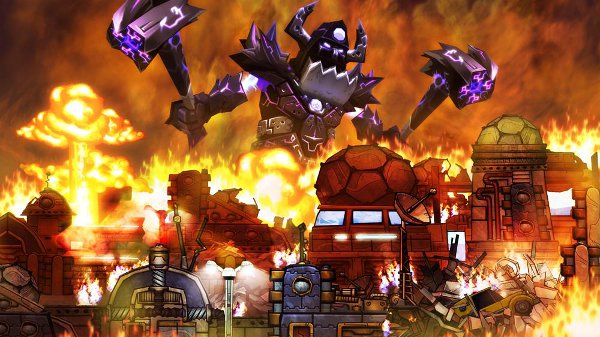 Status: Completed the Baconing!
Achievements: 10 of 12
Gamerscore: 155/200
DLC Purchased: None

Things seemed to be all well in good in Spanktopia after DeathSpank collected all of the Thongs of Virtue and vanquished Sandy. But the peace didn’t last forever, as DeathSpank soon discovers his wearing of all of the Thongs at once has created a new evil: the AntiSpank. Now he must travel across SpankTopia seeking out the Bacon Fires and destroy the extra Thongs that caused the problem in the first place if he hopes to bring down his evil creation and get back to mocking orphans and keeping overdue library books.

If you have played the previous two installments of DeathSpank’s adventure, you’ll find that The Baconing is pretty much the same thing. A humour-packed action RPG from Hothead Games, it follows the same sort of quest-based storyline combines with hack and slash real time battles that we’ve played previously. All new locations have been added for us to explore like the Forest of Tomorrow, a twisted Disney park of sorts for the scientifically-inclined, the Forbidden Zone, an expansive wasteland home to a city hosting a great Arena, and the TRON-inspired house of Z.I.M.O.N., to name a few.

All new locations does not mean completely new characters for DeathSpank to toil for. Familiar faces like Strunken and his wife are around, still with their marital issues for you to work out, as well as the Thongolith Researcher and a few others. There are also orphans a plenty for you to mock, should you so choose. And let’s not forget DeathSpank’s mentor, the wise cow. New to the game are Cyborques, cybernetic Orques who lust for DeathSpank’s head on a stick. And like their ancestors, they aren’t really the brightest enemy out there. Each location also has unique new pests for you to exterminate, my favourite being the weirdos in the casino Rainbow’s End.

Each location has a Bacon Fire to be discovered, so you will need to solve puzzles, help out the locals and fight your way to them and one by one burn the Thongs until you come face to face with your new nemesis. New equipment and stronger weapons will drop the further you progress or as you finish doing chores for the seemingly lazy people you fight so hard to protect. Vendors can be found in your major areas if you are running short on supplies, like Mutoe chunks (which I still find a tad bit disturbing).

Where Thongs of Virtue added Weapons of Justice, The Baconing gives us new battle techniques such as Shield Bash and Perfect Reflect. Shield Bash is great for knocking back hordes of enemies when they surround you, and Perfect Reflect lets you reflect (obviously) ranged attacks, instead injuring the enemy who dared hurt DeathSpank in the first place. The real time fighting works the same as it did before, with barrels respawning and fallen foes returning to life after leaving and re-entering an area.

Compared to TOV, The Baconing has about the same amount of playtime, taking me somewhere around 10 hours or so to run through on normal mode and fully leveling up to level 20. The addition of the Arena and the challenges there helped me gain some ground early on in the game, but I did have to wait until I was level 18 or 19 to go back and finish it up for the achievements. I’m not one for playing these kinds of games co-op unless the character is already included with the purchase of the game, but since Roesha was another 160 points, I passed on her and only played the game in single player mode.

Yes, a lot of people will tell you that The Baconing is more of the same, just with a new coat of paint. And you know what? I am okay with that. I love the humour Hothead has incorporated in the series, even the pokes at their Canadianism (Canoonies!) which may only be understood by gamers such as myself. But it’s because of that humour and the relative ease of play that I keep coming back to them. On days where I really don’t want anything plot heavy, I can pick up a DeathSpank title and lose myself in a vibrant and slightly disturbing world where orphans have a God, unicorn poop is highly sought after manure and something that looks like a skinned Mickey Mouse is encouraging me to kill him.

You can pick up The Baconing on Xbox Live, Playstation Network, or Steam.