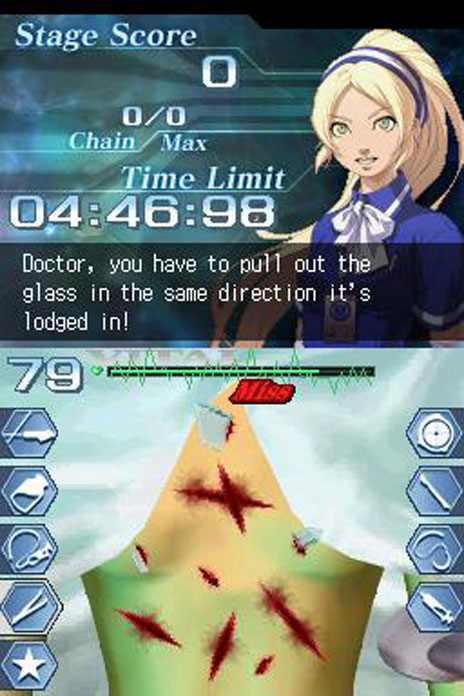 When I spot games that are under $10 I instinctively want to add them to my game library (much to the chagrin of my husband). Hence why I’m rarely allowed to peruse the game section at Fry’s when we stop in there. For the most part I’ve scored big, finding titles that I’d either forgotten I wanted or oddities that seemed to fly under everyone’s radar.

I really only picked up Trauma Center: Under the Knife 2 because 1) it was cheap, and 2) I wanted to see just how well this surgical game played. I’d heard about the ridiculousness of having to disarm a bomb using medical supplies in a previous installment, probably what had originally caused me to avoid the franchise.

Truth be told, I didn’t care too much about the story of Under the Knife 2. Sure, I glanced it over as I mashed my way through to start the operations and I caught a bit of it. Some super virus that the Trauma Center team believed they’d previously put a stop to has resurfaced and they are dealing with a new medical group who will stop at nothing to get their names on the map. Or something like that. I don’t normally skim story like this but all I wanted from Trauma Center was the surgical experience.

(Also, the “voice acting” in Trauma Center is awful. Random short clips of speaking come up every once in a while, more often than not clashing with the actual text. I’ll take no voice over the over exaggerated bits. It just amazes me that the Professor Layton series can do so well with including and incorporating audio on a DS cart while so many others can’t get the formula right.)

Anyway, back to the important part – the gameplay.

You won’t be able to waltz into a hospital with the skills to perform heart surgery but you will improve your hand-eye coordination after spending hours upon hours digitally operating on patients. Starting out with simpler tasks like removing benign tumors and suturing wounds, you’ll get a handle on the basic tools of Derek Stiles’ trade. Then the story starts throwing crazy stuff at you. GUILT, a creation of bio-terrorists and c0-star of the previous installment, rears its ugly head with various new strains and mutations for you to deal with. Things get more complicated, requiring the use of every surgical implement at your disposal as well as Derek’s super power: Healing Touch.

Derek’s Healing Touch is activated by drawing a star over the patient, slowing the timer so you can add a few precious seconds to the clock. Generally, Healing Touch may only be used once per operation so making sure you use it at the right time (if you need it at all) is imperative. Every surgery has a time limit noted at the top of the screen with other pertinent information about the procedure you are undertaking and your attending nurse will give you status updates should the patient’s health drop or they notice anything significant happening. When Healing Touch was available to me I did my best to save it for use near the end of my procedures, just in case I need a few extra seconds to stitch, disinfect and bandage my charges.

At the start of each operation you can select from three difficulties. I’ve only been able to run through a couple at the beginning on Hard, with most of them finished on Normal or Easy modes. This was a game I was checking out for the experience, so I wasn’t going to beat myself up for coasting through on Easy. Besides, even on Easy some of those surgeries prove challenging.

I’d been very impressed as I found myself nearing ever closer to the end of the game that my time had been spent treating those in need and not doing the impossible. Then I found myself using a scalpel to open a locked door. Because this is a scenario doctors would find themselves in. Even more ridiculous was that for part of this event I had to use the Healing Touch on part of the lock so I could slice through some cables.

Unrealistic situations aside, the surgeries themselves can get pretty intense. So much so that at one point I was gripping the DS so tightly with my left hand during a scenario which took three attempts for me to save a patient that I managed to pull a muscle in my arm. My husband bugged me about it relentlessly after I told him about it, joking that I would make a horrible doctor. I also had to switch from my larger stylus (a Lost in Blue preorder bonus) to the thin stylus so that using the scalpel felt more natural; I was making clumsy incisions using the other.

Trauma Center: Under the Knife 2 was a nice change of pace from my usual gaming habits. Being able to play doctor for a fraction of what medical school would cost with the added bonus of not throwing up at the thought of really cutting open a body gave me a sense of accomplishment, granted one that didn’t come with a fancy piece of paper or a paying job.

While I had a great time trying out a genre that was never in my go to bag, I can’t say that my time with Derek and team will continue. Trauma Center was an experience I felt I needed to enhance my overall gaming comprehension. If you want to be a well rounded gamer, you should leave your comfort zone and give new ideas a try every so often. Even with the outlandish story and below sub-par voice acting, there is a style of gameplay that I had never attempted before and proved a pleasant discovery for me. That in itself trumped my issues with the other aspects of this game and I believe I am a better gamer for it.

Trauma Center: Under the Knife 2 can be purchased via Amazon