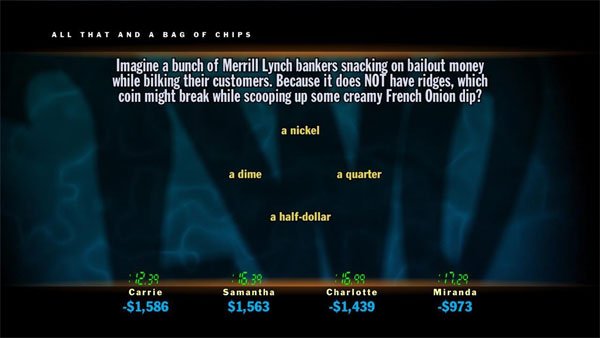 You Don’t Know Jack is the perfect trivia video game. No silly jumping around in front of a camera when all you want to do is veg out on the couch. Just crazy button mashing, yelling, and Screwing (no, not that kind of screwing!!) all in the name of winning. And collecting awesome prizes (but more on that in a bit). An updated version of the long running YDKJ computer game series and short-lived TV game show, Jellyvision brought this fun and addictive trivia game to consoles everywhere, and gamers are the better for it. Right down to host Cookie Masterson, YDKJ is full of laughter, even if some of the laughter is of the groaning variety. Two five question rounds and the famous Jack Attack constitute each episode, Round Two’s answers being worth double that of the first and correct Jack Attack guesses ringing up at $4000 a pop.

YDKJ brought back the Dis or Dat question in Round One to help the player in last place try to bump up their score. Here you are given two choices, for example is the clue a Britney Spears song or the name of a Pope, and you must quickly select the right one (there are 7 clues in each Dis or Dat) before the 30 seconds runs out. Each correct answer is worth $300 and you’ll lose that if you get it wrong. Other players can also attempt a steal by buzzing in with the correct answer before you make the incorrect choice. There are also new themed questions you will randomly come across as you play through the 73 episodes on the retail disc. These theme questions have special introductions distinguishing them from regular ones. Funky Trash, Who’s the Dummy and Nocturnal Admissions (where you try to guess what movie Cookie was watching when he fell asleep) are my personal favourites.

But Wrong Answer of the Game is the one I am currently obsessed with and when I miss that answer I give myself a mental slap. Each episode has a sponsor with some silly name like Lawn Wax and hidden within one of the nine questions (never the Dis or Dat) is a wrong answer to a question that has to do with that game’s sponsor. It’s the only time you want to get a wrong answer, as it comes with a $4000 bonus (double that if it happens in Round Two) and a special prize from the sponsor. There is, of course, an achievement/trophy for collecting all of the prizes from the episodes included on the disc.

Screwing is another way to try to get ahead in You Don’t Know Jack. Each player is given one screw to use per episode. When you use a screw on a player, they have 5 seconds to choose the correct answer instead of the normal 15 seconds. If the player you screwed gets the answer wrong, you get the money. But if they get it right, they get some of your money as well as the money for picking the right answer. I have yet to find time to see how this works with more than two players, which I really need to fix soon.

I also love the little twists thrown in during the numbered intros. For instance, at one point in the game during the Question 4 intro, one of the four 4s is shot and another one runs away. The next episode there was a funeral for the fallen 4 and the episode after that an “f” replaces the slain digit. I’m personally hoping that I come across another episode in which the dead 4 comes back as a zombie and eats the “f”. On St. Patrick’s Day, the yodeling 2 slipped and fell off the “wo” mountain he climbs and the 1 and 0 from Question 10 produce some pretty odd “n”s on rare occasions. Waiting to see what will happen next and seeing something new just gives the game that much more character.

YDKJ can be played with up to four players, either on one console or online. The biggest downfall with this (at least on XBL) is that each person needs to be on their own console. My husband and I have attempted to play on his console with his father via Live and it will not allow both of us to play. I can understand this with other games, but with a trivia game? It’s very disappointing that the game has this limitation, and I wonder if it is the fault of the game or that of Xbox Live.

This game should be in every single gamer’s home. Not for the younger kids (it does have a T for Teen rating), You Don’t Know Jack has a wonderful variety of questions to make you dig into the furthest recesses of your brain, quite often making you feel like an idiot when you make the wrong choice. It’s perfect for pick up and play when you are looking for something to fill a half hour or you can marathon through for hours at a time. Jack Pack 1 DLC is available for the game, with at least two more packs planned. Once we finish up the original 73 episodes, we are definitely picking up the additional DLC. Best $30-40 you will probably spend this year.